Keeping Doc Rivers against his will

The Celtics' coach allegedly wants to continue his career elsewhere as Boston is on the precipice of a rebuild. Why would Danny Ainge keep him?

Share All sharing options for: Keeping Doc Rivers against his will

Getting to resolution on the Celtics' Doc Rivers saga in eight steps:

1. NBA head coaches so rarely sit in positions of true power and advantage. There are 30 positions available and maybe 100 candidates that can make legitimate cases. (That might be low, frankly.) The Celtics' Doc Rivers has done enough in Boston to truly sit in a position of true power. Gregg Popovich has true power. That's about it. Any other coach in the NBA could get fired tomorrow and it wouldn't really be a shocker, because norms no longer exist in the coaching realm. Three coaches (Lionel Hollins, George Karl, Vinny Del Negro) got their teams to franchise-record win totals and were fired at season's end. The current era of the NBA is not particularly kind to coaches.

2. Doc Rivers, again, has done enough to command power and advantage. Danny Ainge can't imagine the Celtics without Doc at the helm. Doc also happens to be the most highly paid coach in the NBA at $7 million. He has repeatedly flirted with taking a break, and the idea that he'd be comfortable walking away might have something to do with that fat salary. You don't need to be a cold cynic to think Doc is a smart businessman in addition to a good coach.

3. Danny Ainge is faced with some tough decisions in Boston, excluding any issue with Doc. Paul Pierce can be waived or traded. Kevin Garnett can be traded, if he consents. Ainge can look to rebuild through the draft, or leverage his assets for players who can jump in with Rajon Rondo and Jeff Green next season and get back to the playoffs. He can move Rondo. He can make Rondo his centerpiece. He can leave Avery Bradley as a key component of the future or peddle him for a more traditional star type. Ainge has been faced with the opportunity to blow it all up every year since 2010, and it must be getting harder to say no.

4. A coach of Doc's caliber does not typically preside over a rebuilding effort. Perhaps it does not make sense, but rebuilding efforts are typically run by first-time coaches, retread coaches or young savants, not one of the few coaches with an NBA championship to his name. 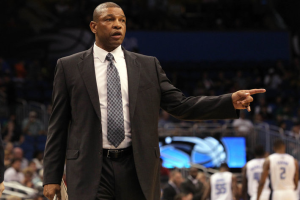 Jeff Clark of CelticsBlog considers the Doc Rivers saga and the coach as the proverbial canary in the coal mine.

4a. Paying a coach $7 million to preside over a 25-win season makes little sense.

5. If Doc Rivers does not want to coach a Celtics team without Kevin Garnett or Paul Pierce, keeping Doc in Boston because he is under contract is a recipe for disaster. Coaches struggle to reach players even when coaches are working their asses off. Doc's integrity may be unimpeachable, and he may be incapable of giving poor effort. But that's not a risk I'd be willing to take with a $60-million roster.

7. Clearly, the Celtics do have an asset in Doc, and if he does not want to preside over the next phase of the team, Ainge should get something out of that asset. He is under contract, after all. A pick or two to boost the rebuild effort should suffice.

8. Under no circumstance should Ainge try to turn this into Vinny Del Negro coaching a Rajon Rondo-led team.

• Deron Williams: "It's a risk" | Kidd in rare company

• Flannery: All eyes on LeBron James