There was a method to LeBron James' and Dwyane Wade's madness in Miami's bounce-back win in Game 4 of the 2013 NBA Finals. We analyze how they did much more than just hit a few extra jumpers.

The San Antonio Spurs' defensive strategy during the 2013 NBA Finals has been clear, as we discussed after Game 3. By laying off LeBron James and Dwyane Wade when the Miami Heat's primary players had the ball, the Spurs were able to protect the paint and make it more difficult to get to the basket.

Every strategy, no matter how great, has to concede something, however, and in San Antonio's case, they conceded one of the most valuable commodities in basketball: space. Space is what allows players to get open. Space, if used properly, empowers the offense to dictate terms of engagement.

The strategy was seemingly counter-intuitive by the Spurs, but it worked in Game 3 because it planted a seed of doubt in LeBron and Wade's minds. Throughout Game 3, they ran through the same inner monologue: Am I really being given all this room to make a decision? What's really the best way to take advantage of this space? That seed of doubt crept into their possessions in Game 3, causing tentative play.

With a game to process things, though, LeBron and Wade and figured out the adjustment. And no, it wasn't just hitting more jumpers.

More: Big 3 have their night Wade returns to his roots. How Spoelstra dictated lineups

There's a common misconception that the only way to use space is to rise up and "make the defense pay" with open jumpers. That helps, of course, but it also plays into the defense's hands. Why are the Spurs giving Miami's ball-handlers so much space? So they'll shoot jumpers instead of driving. If a team merely shoots more jumpers, they are accepting the terms the defense has laid out. Teams can occasionally win by having a hot shooting night against this defense, but at least they haven't flipped the defensive theory on its head.

To do that, teams have to manipulate the space being given rather than simply accepting it. The Heat found a way to manipulate space by attacking from further away in Thursday night's win. LeBron and Wade often used the space they were being given to rev up their engines, turning themselves into faster players by starting their drives well beyond the three-point line. They also attacked quicker, going before the defense was set, to further implement this offensive counterattack.

The tone was set early, too, as the video below shows James slicing in from left to right quickly off of a made basket, setting up Chris Bosh for an open jumper.

It's hard to say when LeBron actually decides to attack, because he never really stops moving, but this seems to be about as close to the moment as we could find. 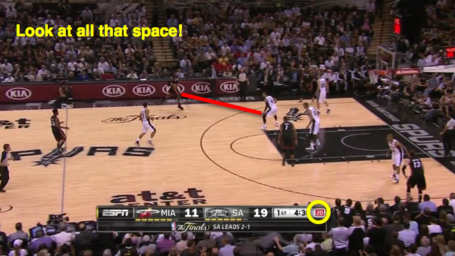 LeBron is several feet beyond the three-point line when he starts to build the most speed, making it very difficult for his defender -- Danny Green, in this case -- to beat him to the spot when James has so much space to make his move. On the occasions that LeBron is stationary with the ball at the three-point line and then attacks, it's essentially only a matter of stopping his first step. On plays like this, however, it's much more than that.

As shown in the picture below, LeBron doesn't actually make his move until he's inside the three-point line, after Green has backpedaled further. 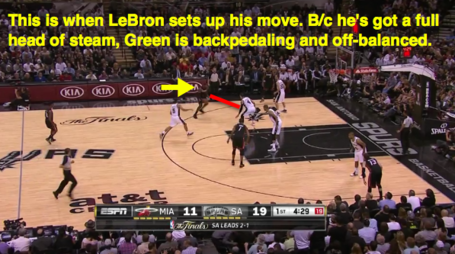 James needs only to maintain forward motion to get into the teeth of San Antonio's defense after being given all of this space. Once LeBron does that, he's able to draw three defenders to himself, setting Chris Bosh up for a jumper. 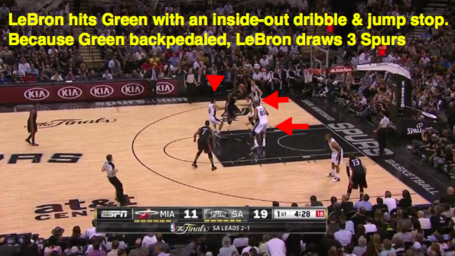 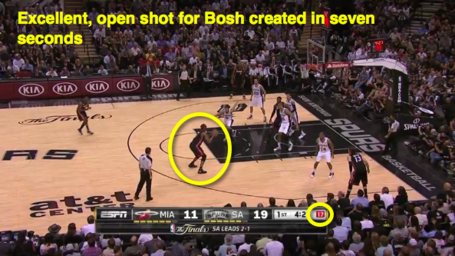 Note that the entire sequence took just seven seconds to manufacture an open jumper off of a made Spurs basket -- Pace was essential to Miami's Game 4 success.

In case that wasn't enough, three other examples of James using space he's presented to attack quickly with a full head of steam are included below.

The second video is a carbon copy of the breakdown above. LeBron advanced the ball quickly off of a made basket, paused for a quick second when he was well beyond the three-point line to comprehend the Spurs' positioning and then used the space he was presented to build up speed and make a quick move, getting to the middle of San Antonio's defense and setting up a shot for a teammate.

The third video didn't result in a made basket, but the concept is similar: James used open space to back Kawhi Leonard down in the post, draw a second defender and then kick it out to Mario Chalmers for a good look from behind the three-point line.

Even when James was unable to get anything out of his early quick attacks, the momentum he created put him in rhythm to shoot mid-range jumpers quickly and confidently. The mid-range jumper make below likely would've missed if James didn't rush the ball up quickly to attack Leonard initially.

By attacking Leonard from the start, LeBron has put himself in a position to play, not think, because overthinking is what caused LeBron to crumble when presented with extra space in Game 3.

Wade, meanwhile, saw similar defensive coverage in the first three games and was able to respond the same way LeBron did in Game 4. For example, look where Wade began the drive on this semi-transition sequence early in Thursday night's first quarter. 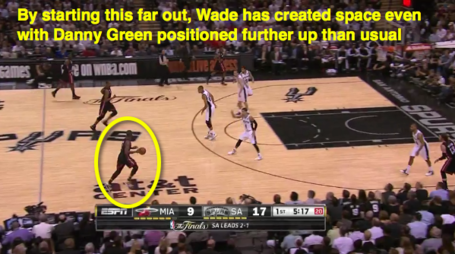 Green is pushed up a bit higher than you'd expect, but Wade responds by simply starting his drive even further outside of the arc. The effect? As Wade advanced, Green retreated so by the time Wade was ready to hit Green with his primary move, Green was off-balanced and not in position to stop it. 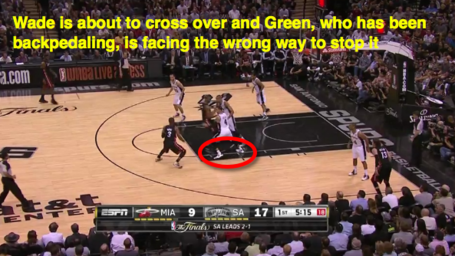 Wade also used space to attack in half-court situations when given the opportunity. Below, he starts a drive against Tim Duncan -- on a switch, obviously -- from behind the three-point line: 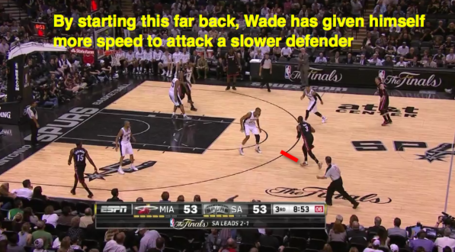 Doing this allowed Wade to build up momentum, making his crossover dribble against a bigger defender more vicious than it typically would be.

On the next play, check out how Wade is spacing the floor by standing several feet beyond the three-point line. 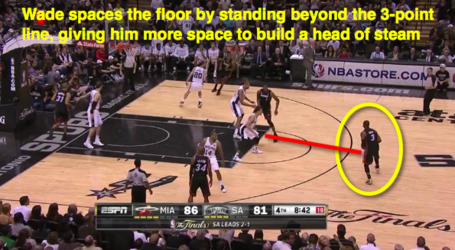 That decision allowed him to build a head of steam when attacking Green, making Wade's quick spin for a lefty floater much more effective.

Even when Wade settled for the mid-range jumper, though, it was when he forced the defense to backpedal -- not the other way around.

Wade wasn't sprinting ahead on these quite as much as LeBron was, but he still used the space presented to him to keep moving forward rather than stopping and having to start again. That made the swingman's dribble moves more effective and was another way to take what the defense was giving him without simply settling for jumpers every time down the court.

Miami also used Wade and the Heat big men on timing pick-and-rolls (using the space they were given, again) as an additional wrinkle to Game 4's gameplan. Rather than bigs going up to Wade to set the screen, the Heat had their pickers set screens at at the pinch post to give more room for an attacking Wade.

For example, look where Udonis Haslem was set up in one of their end-of-quarter situations. 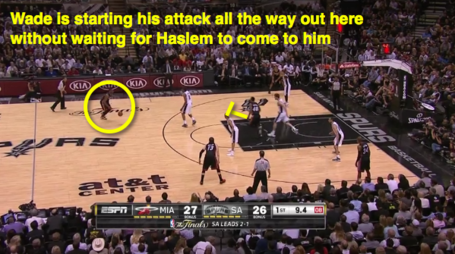 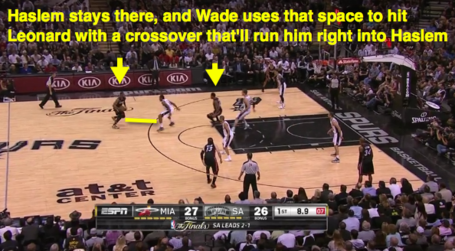 The Heat are trying to turn this screen into a timing maneuver. Wade is using the space he's given to drive, and Haslem's job on this play is to meet Wade's attack perfectly, nailing the off-balanced Leonard with a big screen. It's a difficult play to master due to timing issues, but it's devastatingly effective against defenses that surrender all this room to the ball-handler.

And, sure enough, the Heat ran Leonard right into a Haslem screen. 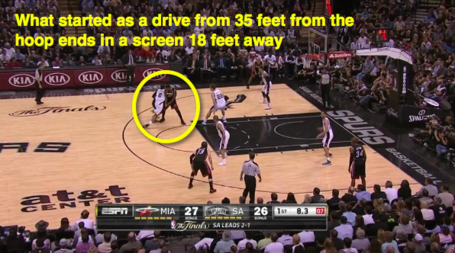 Tiago Splitter helped nicely on the play, but Wade still got into the paint for a makeable floater.

Another secondary transition situation happened when Wade notices Boris Diaw pick him up in transition. This time, though, it's Bosh who was in charge of screening for Wade. 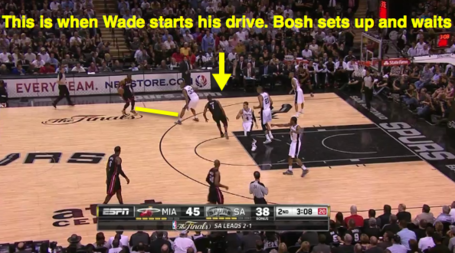 Bosh doesn't make great contact on his screen, but it doesn't matter: The room the Spurs gave Wade proved to be their undoing as Diaw opens up his stance, forcing Duncan to help. 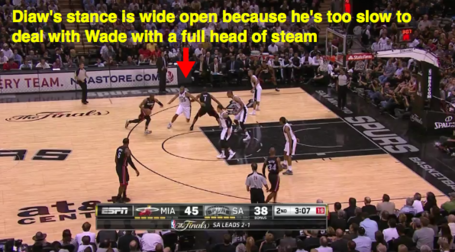 From there, Wade simply made a great play, sneaking a pass into the rolling Bosh for a layup.

There are going to be a number of pundits that say LeBron and Wade stepped up by simply hitting a few more mid-range shots against San Antonio's sagging defense, but don't listen to them. The reality is that LeBron and Wade manipulated the space they were given much more effectively.

Did that involve hitting a couple more mid-range jumpers? Absolutely. But those plays were the effect, not the cause. By attacking quicker, more decisively and further away from the basket, LeBron and Wade made themselves into faster threats, building up a head to steam that put the Spurs' defenders on their heels.

The game became more about speed rather than quickness -- and there's a crucial difference between the two. Quickness is the act of starting and stopping whereas speed is the act of changing direction while moving.

It's much easier to neutralize quickness with superior positioning and preparation than speed so rather than having to worry about merely stopping a first step, the Spurs had to guess which direction two moving freight trains were heading. That led to easier -- and perhaps more importantly -- in-rhythm shots for LeBron and Wade.

It'll be interesting to see how or if the Spurs adjust in Game 5. On the one hand, San Antonio needs to yield some room to LeBron and Wade due to their ability to get to the basket, but the Spurs might simply just push up a bit more to find a happy medium between too much space and not enough.

On the other hand, however, the success of LeBron and Wade was also significantly enhanced by attacking early in the shot clock. Can Miami's stars keep that urgency up for two games in a row?

That's been Miami's problem throughout the playoffs, but it certainly sets up for an interesting Game 5.

• Flannery: Big 3 have their night, finally

• Big 3 ignite Heat | What went wrong for the Spurs?

• Keeping Doc Rivers against his will