The Los Angeles Lakers believe they are in a good place to re-sign their free agent big man, but if sign-and-trade options appear on their table they won't discount them.

The Los Angeles Lakers are confident that they can re-sign free agent center Dwight Howard this offseason and hope to do so, but that doesn't mean they're throwing all of their eggs into that basket. ESPN's Marc Stein and Ramona Shelburne report that the Lakers are going into July with a "keep-all-options-open approach."

It's expected that the Houston Rockets, who are considered the leading suitor for Howard outside Los Angeles, will chase after him as a free agent but also prepare a sign-and-trade proposal to send to the Lakers. Even though Los Angeles would like to keep Howard, they will not shy away from considering such a deal. At the same time, it's unlikely they take a sign-and-trade because it would probably include long-term contracts.

Match made in heaven 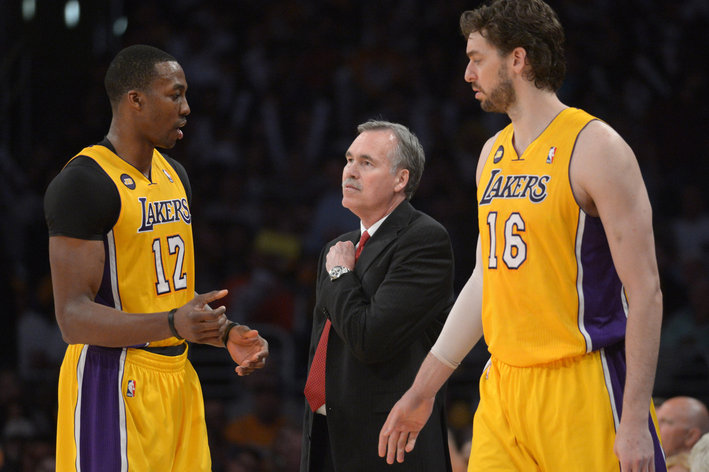 Are Dwight Howard and Mike D'Antoni actually a perfect fit for one another?

Taking on those would hamper the Lakers' ability to sit tight with a core of Steve Nash, Pau Gasol and a recovering Kobe Bryant in 2013-14 while waiting for a big-name free agent summer in 2014. For example, Houston would probably include either Jeremy Lin or Omer Asik to the Lakers in a Howard sign-and-trade package. While both are conceptually nice pieces, adding them to an already-problematic luxury tax wouldn't help in the longterm.

So if Howard does leave, it wouldn't be outlandish to predict the Lakers simply accept it while saving cap space for next summer.

Additionally, the Los Angeles Times reported that neither the Lakers nor the Clippers would be willing to swap Howard for the Clippers' Blake Griffin and Eric Bledsoe. ESPN, however, says that is not because of any philosophies within the Lakers organization of never making a trade with their fellow Staples Center rivals. The Lakers wouldn't completely dismiss such a deal if it were offered.

• Doc Rivers to the Clippers? Not so fast

• Wade returns to his roots