Some people were stupid enough to leave one of the best basketball games of the year before the final buzzer. This is their story.

(Update: Now with video.) With the Miami Heat trailing 94-89 in a potentially decisive Game 6 of the NBA Finals, many Heat fans at AmericanAirlines Arena decided they'd head out early. You know, beat the traffic -- no need to stick around to watch the last 30 seconds of a game that had already proven to be one of the most incredible Finals games in recent memory, right?

TV cameras captured them, and Bomani Jones snapped a pic: 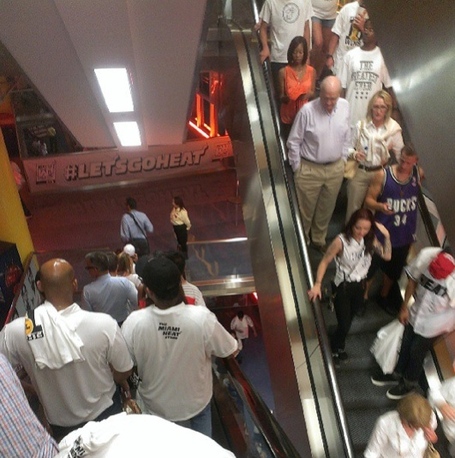 (The only person not at fault here: dude in the Ray Allen Bucks jersey. I'm cool with him.)

Of course, LeBron James missed a three, and off a rebound, hit a three; after Kawhi Leonard missed a free throw, a James miss again rebounded by the Heat ended up in Allen's hands ... and Jesus Shuttlesworth came through to tie the game with another three. The Heat eventually won 103-100 in overtime, a game that immediately earned entry into the pantheon of great NBA Finals games. And these fans -- "fans" -- didn't get to see it.

Now I'm watching horrible, drunk, quitting fans desperately trying to get back in. This is madness.

None of them deserve to be let in. They are pounding the glass doors. I'm all for gender equality but I'm only seeing female guards....

Might need to call the big dogs in soon. Just sayin'

Cops finally here. Fans still pounding on the doors begging to be let in.

There are a lot of stereotypes about Miami Heat fans, and we'd like to thank these guys for coming through. The only disappointing thing is they're probably just going to tell everybody that they were at the game and how crazy and awesome it was and leave out the whole "we left without seeing the insanely dramatic finale where the team we supposedly support came back against all odds because I didn't believe they were actually going to come back" thing.

Update: NBC Miami got footage of disappointed fans leaving, and interviewed actual Miami fans depressed that their team did not rise to the occasion because they were unaware the Heat had actually won the game. It's as amazing as it sounds.