After LeBron James lost his headband in Game 6 of the NBA Finals, he went on a scoring rampage. Naturally Twitter lost its mind.

Share All sharing options for: The LeBron James Headband Game

Game 6 of the NBA Finals was one of the best played NBA Finals games ever, and that's not being hyperbolic. It featured runs, counter-runs, and a hyperventilation-causing finish with Ray Allen drilling a game-tying three to stave off elimination and send the game into overtime, where the Miami Heat would force a Game 7.

But to some -- especially on Twitter -- it will always be the LeBron James headband game.

James' headband has become sort of an NBA inside joke, because its clearly moved back along the course of his forehead over the course of career as the league's best player tries -- and, well, fails -- to hide a receding hairline. But on a dunk with 8:59 left in the fourth quarter of Game 6, Tim Duncan knocked King James' proverbial crown off:

It fell to the ground, and was probably swept off by the kid whose job it is to mop the floor while the players are at the other end of the court. For the final nine minutes of regulation and the entirety of overtime, the headband vanished, and James played on, sans headband..

Without it, he looked kinda weirdly naked, and surprisingly difficult to recognize, even for seasoned NBA fans.

Please put the headband back on, LeBron. It's like you're naked. I feel like I'm supposed to avert my eyes.

But without the headband he took over. The headband-removing dunk cut a Spurs lead that had been 12 down to just three. Two possessions later, he spun with force past Tony Parker and Kawhi Leonard for an winding layup. Down two, he absolutely erased a Tim Duncan shot (GIF BELOW), then in transition, stopped, ducked under Duncan's defense, and finished an off-balance look in the paint.

The block-to-layup tied the game at 82. James would hit four of his first five shots after losing the headband, then sank a three with less than half a minute left to keep the game alive and allow Allen to hit his shot. All told, James went 5-for-11 with 12 points, three rebounds, two assists, and one block after the headband's removal -- not all that impressive, considering he had 32 points, 11 assists and 10 rebounds in the game. But the impact he made immediately after the famed sweat collector removal was LeBron at his most freakish, and that's why this was The Headband Game.

Meanwhile, Twitter exploded. You know, it started with jokes:

I thought it was Joel Anthony RT @RoFloESPN: Man, Lebron looks weird without his headband. #NBAfinals

Wow. I thought it was Jerry. Stack house. But it's Lebron without a headband

Joel Anthony has been everywhere since LBJ lost his headband

LeBron without a headband is like seeing Darth Vader's real face.

Was sorta expecting Lebron's hairline to roll up like a sail after taking his headband off. #baldknowsbald

And then, quickly got SERIOUS:

NO MORE HEADBAND EVER!

The headband was LeBron's restrictor plate it all makes sense now.

If I'm Pop I call a timeout just to allow LeBron to put the headband back on.

This HAS to be the moment LeBron permanently ditches the headband.

All told, James had nine points on six shots in the final minutes of regulation, including the three that kept the game alive and some

Well, I’m never wearing a headband in a pickup game ever again.

LeBron going bananas without the headband has instantly become my favorite NBA storyline of the season.

No headband, no problem...LeBron is dominating this quarter!

Bold words from Ty Lawson, there.

And of course, because nobody in the world is actually funny on their own, this happened:

I wish I was kidding: 107 parody Twitter accounts were created tonight for LeBron James' headband.

It was the talk after the game as well, too:

"I guess the headband was the least of my worries at this point." - LeBron James on his play down the stretch 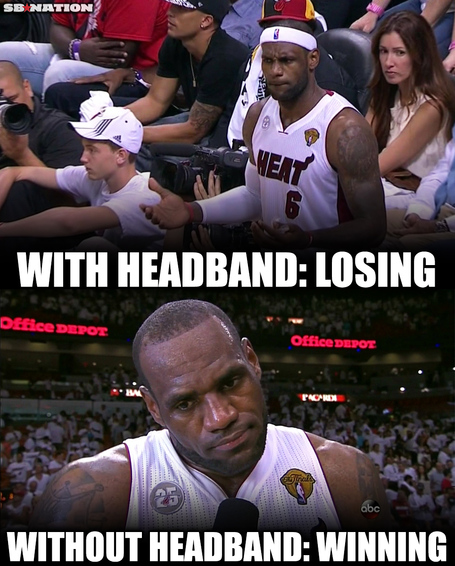 Now, only one question remains:

So here's the real question going forward: Headband or No Headband for Game 7?