The Heat and Spurs are headed to a Game 7 after a whirlwind close to Tuesday night's contest. We try to relive some of the craziest moments from a fourth quarter and overtime to remember.

Share All sharing options for: NBA Finals, Spurs vs. Heat: Lasting impressions from a wild Game 6

You could see the exhaustion, the disappointment, the chagrined acknowledgement of what had just been lost in the face of Manu Ginobili after the Miami Heat's incredible 103-100 victory in Game 6 of the 2013 NBA Finals. There are times when the pressures that come with being a modern athlete just seem too cruel, and this particular post-game press conference was one of them.

Ginobili, for all his turn-back-the-clock magic in Game 5, had just delivered in an abomination of a Finals performance and saw his team cough-up sure victory thanks to missed free throws, poor rebounding and some clutch shot-making by the Heat in the closing minute of Tuesday night's game. Palm glued to his face just minutes earlier, a local newscaster asked Ginobili how San Antonio's ring-clad veterans will re-energize their younger teammates heading into a Game 7: 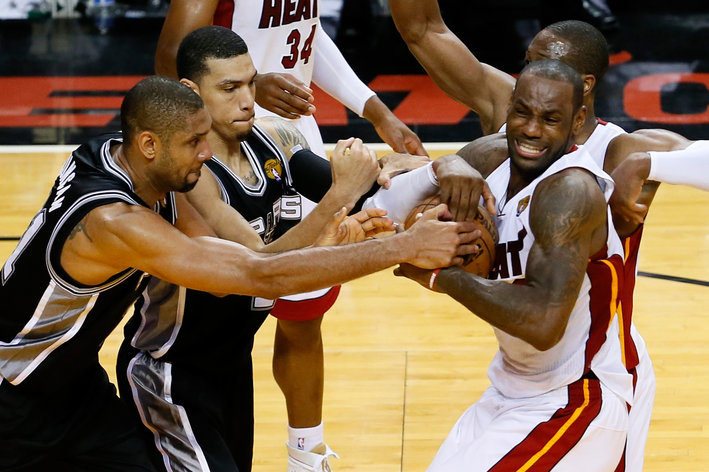 Paul Flannery recounts in an instant classic from Miami

"I have no clue how we're going to be re-energized," Ginobili said, via NBA.com's live press conference stream. "I'm devastated. But we have to. There's no Game 8 afterwards."

There's no magic potion to accomplish just a thing. San Antonio will simply get all the rest it can for a couple days before the last game of the NBA season tips off on Thursday night. Exhaustion comes with the territory when you've reached the mountain top of the NBA Finals, of course, and it had clearly taken its toll on both teams at the end of Game 6.

The fourth quarter and overtime of Game 6 was such a whirlwind that it even felt fatiguing to watch on television from a couch 1,300 miles away. I think I broke a sweat just trying to keep up with Twitter. The Heat trailed 75-65 at the end of the third quarter before absurdity set in and all hell broke loose. There will be a Game 7 on Thursday, that much is certain. In the immediate, Game 6 left a giant wake for us to consider.

The performance of Dwyane Wade feels like one of the most confounding efforts in recent NBA Finals history. He struggled mightily in the first three games of the series, exploded for unforeseen dominance in Game 4 and might have been the Heat's best player again in Game 5. In Game 6, his team only took off when he was on the bench.

There have been plenty of times when Wade is straight killing the Heat.

The dirty secret evident to anyone paying attention during these Finals is there have been plenty of times when Wade is straight killing the Heat. He destroys their spacing because he can't shoot threes, he seemingly jacks up shots outside of the flow of the offense just so he can reach some imaginary quota and he's largely been horrendous on defense.

When those pullup jumpers are falling like they were in Game 5, you remember that this was one of the 10 best players in the league when this season began. And then there are other times when Miami seems like it is just trying to kill time with Wade on the floor before it can replace him with a shooter.

Wade was subbed out for Mike Miler with :39 seconds left in the third quarter of Game 6, with the Heat trailing 75-64. By the time Wade returned with just under four minutes left in the fourth, the Heat were up 87-84. This was not a coincidence.

It's true that LeBron James did much of the damage himself in the fourth quarter, scoring 16 of his team's 30 points in the period, but three of the other four field goals made by his teammates were three-pointers. There was a Mario Chalmers three to open the quarter, Mike Miller's shoe-less shot, and of course Ray Allen's corner dagger to send the game into overtime. What was equally important was just getting Wade out of the way. The ball was in James' hands; everyone else on the court was simply waiting for him to hit them with a bullet pass for an open shot.

Wade played the entire overtime period and summed up the devastating effect he can have with one late possession that nearly cost his team the game. The Heat were up 101-100 with :31 seconds remaining when Wade took the inbounds pass. He dribbled aimlessly at the top of the key until James set him a pick; after a quick crossover he fired a step-back jumper without even looking at his teammates the entire possession. Of course, he missed, and San Antonio corralled the rebound before ultimately failing to score on its penultimate possession.

It was an unthinkable possession given the circumstances: Wade had been off all night, James was feeling it and never even touched the ball. The Heat survived, but it felt like an unnecessary bullet to dodge. If this is the Dwyane Wade Miami has to work with going forward, there might be even greater desperation to pocket a championship while it still can.

What gets miscast as "boring" has always just been the San Antonio Spurs' ability to avoid the mistakes that plagued them at the end of the fourth quarter on Tuesday. If Ginobili or Kawhi Leonard could have just made one more free throw, if anyone in a black jersey could have just grabbed one defensive rebound, if they could have executed a typically stellar halfcourt set in one of their final few possessions instead of getting caught up in the moment...

The Spurs were so close, and it's impossible to consider that they have to go against a young, hungry and LeBron-led Miami team again in Game 7. San Antonio was seconds away from a championship because of surgical execution and a few key role players stepping up throughout the series. It's gotten them to a Game 7, but now all of that feels like it can be thrown out the window. There's only 48 minutes (maybe more) of basketball left, and nothing that came before it really matters.

While all signs point to Miami winning Game 7 on their home floor, we should know better than to discount San Antonio. Assuming they can find whatever fuel they have left in the tank on Thursday, Game 7 should be anything but a coronation. The Spurs don't roll over.

There's no basketball-reference query you can run for this sort of thing, but I believe the fourth quarter of Game 6 was the first time we've seen LeBron without his headband. It didn't symbolize anything nor did it have an impact on the outcome, of course. But watch the final nine minutes of that fourth quarter again and LeBron just looks like a man possessed. If you think all the legacy talk is grating from a fan's perspective, imagine how he must feel about it.

And still, we were so close again to James being cast as a goat. With :58 seconds left and the Spurs up two, Leonard stripped the ball from his hands when he tried to post-up Tony Parker. The next possession, James drove and threw a pass to no teammate in particular. The Spurs would recover. Finally, LeBron bricked a three with the Heat down 94-89 with :26 seconds left, before Mike Miller would get the rebound and kick it back out to James who buried the triple.

LeBron looked angry in the fourth, and he displayed the full package of his dominance in willing Miami back into the contest. Yet in the final minute, there were three separate instances that seemed custom built to induce a nauseating amount of chatter about James' head and gut.

There's such a fine line between being remembered as a hero or a goat, even if none of it really matters.

That's sports. There's such a fine line between being remembered as a hero or a goat, even if none of it really matters. What does is a do-or-die Game 7, a fitting ending to a thoroughly entertaining NBA Finals. This NBA season was a bit of a bummer with injuries to so many superstars, but these incredible Finals feel like it absolves everything. Basketball at its highest form, one game to decide everything. This is why we watch.