The Heat and Spurs each came back from the dead. The ring was within San Antonio's grasp, until it wasn't. This was one wild game.

MIAMI -- Ray Allen was talking about shooting, a skill that he has mastered arguably better than anyone who has ever played the game. Once you get Allen engaged on this topic he offers a fascinating insight into a thought process that has taken years to develop and hone through countless hours of repetition and practice. The curious thing about Allen's approach is that he doesn't actually shoot at anything.

"There's no target," he told me earlier in the series. "I don't aim. If I'm aiming that's when I'm missing. The way I look at it is just get the ball in the air. You do it over and over again you should never have a target."

So, when the ball found his hands with the Heat's season, if not the entire legacy of one of the boldest experiments ever launched in American sports, on the line, Allen did what he always does; he trusted his process and he trusted himself.

"Once the ball came off the rim, I just knew to get to the three-point line," Allen said. "We needed a three. Two points isn't going to cut it. So my mental checklist is really to have my legs ready and underneath me so when the ball comes, if it comes, I was ready to go in the air."

Allen's shot was true and it sent this incredibly thrilling game into overtime where the Heat were able to pull off a 103-100 victory and send this series to a seventh game.

"It's going to be a shot that I'm going to remember for a long time," Allen said. Someone asked if it was the shot that would define his career and he answered honestly, "I don't think that's up to me to decide."

He's right. It won't be up to him, just like it won't be up to LeBron James to define his legacy or Tim Duncan, for that matter. It will be up to us, the chroniclers of history, to narrate these matters. It's a tremendous responsibility that shouldn't be reduced to a simple game of heroes and goats, especially not after something like this.

That's not to say that there isn't room for honest analysis and dissection. Had things turned out differently, we'd all be wondering why the Heat turned the offense over to Dwyane Wade late in the fourth quarter after LeBron had carried them back from the brink.

We can debate for hours whether Gregg Popovich should have fouled with a three-point lead even though he has never done so in that situation over the years. Or whether he should have had Tim Duncan on the court in the final seconds to grab the rebound that ultimately went to Chris Bosh, even though his strategy has always been to have smaller players on the floor who were capable of switching in that situation.

"It's what we've done all year," Duncan said. "In a situation where we were going to switch a lot of things, and just unfortunate the way it happened. We got a stop, and we got a bad bounce, and right out to Ray Allen for a three. Just situational. But there's no questions there. It's the plays we've been making all season long."

And why wouldn't they? Up to that moment, Popovich had been arguably the true MVP of the series, designing a defense to slow down LeBron and making key calls such as putting Manu Ginobili into the starting lineup before Game 5 when Manu went all Manu and gave the Spurs a chance to close out the series.

Pop trusted Ginobili again and he responded with one of the worst games of his career. It's basketball, a strange and bewildering sport that flows to the rhythm of its own beat regardless of pre-packaged narratives. It's a game that was played at the highest level most of us can remember in such a pressure-packed situation and it was beautiful and agonizing and awesome and crushingly sad on Tuesday night.

"I have no clue how we're going to be re-energized," Ginobili said. "I'm devastated. But we have to. There's no Game 8 afterwards. We're going to have to play our best game, even better than today. Shoot better, better defense, less turnovers in my case, but, yeah, there's no secret recipe for bouncing back."

You can go one of two ways with this. You can rip Manu for his turnover-filled performance, or you can consider the man in full and praise his honesty and raw emotion. If you have a soul for the game it's difficult to choose the former path after a game that the Spurs had won, lost, won and then lost again all in the span of 53 gut-churning minutes.

A few moments later, LeBron James sat down at the podium looking like he had been through hell. For three quarters he had been flummoxed again by the Spurs defense. His driving lanes clogged with defenders, he settled for jumpers and failed to convert when he did put his head down and barrel to the basket. The invective was already flowing and then it all changed.

"I basically told myself, give it all I got," James said. "If we go down losing, I'm going to go down with no bullets. I'm going all out. I can be satisfied with the results."

Down 10 entering the fourth quarter, LeBron changed history with a fearless attack. He was unstoppable, scoring half of his 32 points on his way to a triple double that few people even noticed he had. The game was that great and relentless. There was no time to assess matters in real time.

Ultimately, this is why LeBron is held to such a high standard, because he reached a level that few players have ever been able to match. But however he got there, he did it and that's something he can carry with him forever. 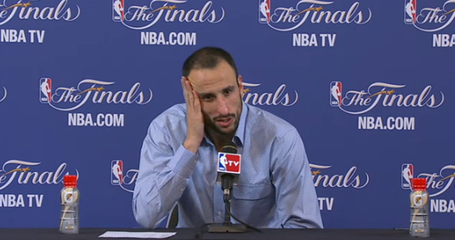 Game 6 did not exactly go as planned for Manu Ginobili.

"It was by far the best game I've ever been a part of," James said. "The ups and downs, the roller coaster, the emotions, good and bad throughout the whole game. To be a part of something like this is something you would never be able to recreate once you're done playing this game."

That's why they play, after all. Forget the money and the glory and the adulation and all the trappings of the celebrity that comes attached with the NBA lifestyle. It's the game and the need that it fulfills at this extraordinarily high level of competition. It's a cruel part of the story that someone has to to live the other side of this tale.

Take Kawhi Leonard, the young Spurs forward who missed a crucial free throw that opened the door for Allen to be a hero. It may have been the difference between winning and losing, just as his 22 points, 11 rebounds, three steals and zero turnovers would have earned him a lifetime membership in the San Antonio pantheon had any number of things turned out differently. Or Duncan, who turned back the clock with 25 points in the first half, only to run out of steam in the second. When it was over they were merely footnotes.

This was the Spurs' best shot. They threw everything they had at Miami and even when all looked lost late in the game, Parker responded with a late three and some straight-up sorcery in the paint. The lead was five and all around the stunned arena as fans streamed toward the exits, the ropes were put in place and a coronation was scheduled to take place.

The Heat players said it pissed them off, but whatever, they had themselves to blame for their predicament. Then fate played a trick on everyone. James buried a three, Leonard missed a free throw and Allen was open in the corner.

REACTIONS: Spurs let the ring slip away Heat pop out of the grave

"I honestly can say I gave myself a great opportunity, a great chance to make that shot," Allen said. "And it wasn't unfamiliar to me positionally. When it went in, I was ecstatic. But at the same time I was expecting to make it."

If you can't respect the craft then you're wasting your time. The craft is everything. The process and the results are all the larger pieces of history, but it's the craft that makes the game so compelling.

Someone asked how they could possibly recover after such a devastating loss to which Popovich replied, "Get them on a bus. It arrives at the ramp over here. We get off the bus, we get on the court and we play. That's how we get ready."

We have been spoiled by this series and we were given the ultimate gift of a game for the ages on Tuesday night. Both teams are drained, exhausted and spent. LeBron could barely move from his seat after fulfilling his media duties. History says that Miami has an almost unbeatable advantage in Game 7 and maybe history will be proven correct again on Thursday night. However it turns out, we have this game and it deserves to live long after the final chapter is written.