Had Tony Parker made that off-balanced jumper in the final seconds of regulation in Game 6, controversy likely would have ensued.

The San Antonio Spurs subbed-in Tim Duncan while referees reviewed Ray Allen's game-tying shot in the waning seconds of of regulation in Game 6 as the Spurs attempted to get their best players back on the court. That was a good plan, obviously, but the substitution was blatantly illegal -- as first pointed out by Kelly Dwyer of Yahoo! Sports.

The Inspiring, Agonizing Story of Game 6 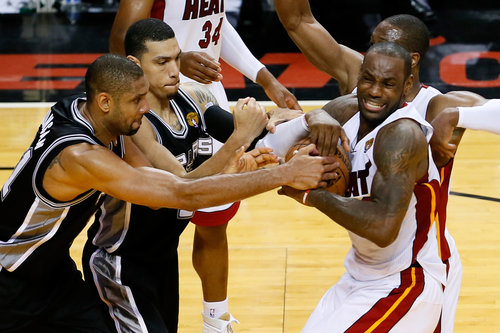 Looking back at one of the greatest games in NBA history.

With just 5.2 seconds left in the game, San Antonio attempted to hurriedly inbound the ball on their final play with the Miami Heat defense out of position, but officials instead opted to stop play to review whether Allen's shot should've been worth two or three points.

Following the review -- Allen's feet were firmly behind the line -- Duncan was inserted back into the game ... even though Dwyer notes such substitutions aren't allowed:

"The Spurs entered Tim Duncan back into the game while Allen’s shot was being reviewed. Teams are not allowed to substitute players during referee reviews, because reviews aren’t technically a dead ball situation.

Think about that. Tim Duncan could have capped a legendary career with a game-winning shot to win the 2013 NBA Finals, and it wouldn’t have even been legal. And there wouldn’t have been anything the referees – considering the NBA’s current in-game rules regarding mulligans – could have done about it."

Parker eventually missed an off-balanced shot attempt to push the game into overtime and Miami toughed out a 103-100 win on their way to forcing Game 7. Had the Spurs' point guard made that shot, though it likely would've gone down as one of the most controversial plays in NBA history.