Share All sharing options for: Chris Bosh says fans who left Game 6 early can 'watch the game at home'

Chris Bosh had a message for Miami fans who left the Heat's historic comeback late in the fourth quarter: stay home next time.

To the assembled media Wednesday, the Heat forward shared his displeasure about the Miami fans who began filing out of American Airlines Arena when it appeared the San Antonio Spurs had won the title. Per ASAP Sports:

Bosh: You never give up. People gave up on us, and they can stay where they are and watch the game at home.

Media member: Did you like the punishment? They didn't let them back in.

Bosh: Yeah, you can't get let back in after you leave. I know that. Hell, I've been to games. You can't leave a game and then come back. It doesn't make any sense. You left. It's not punishment; that's protocol 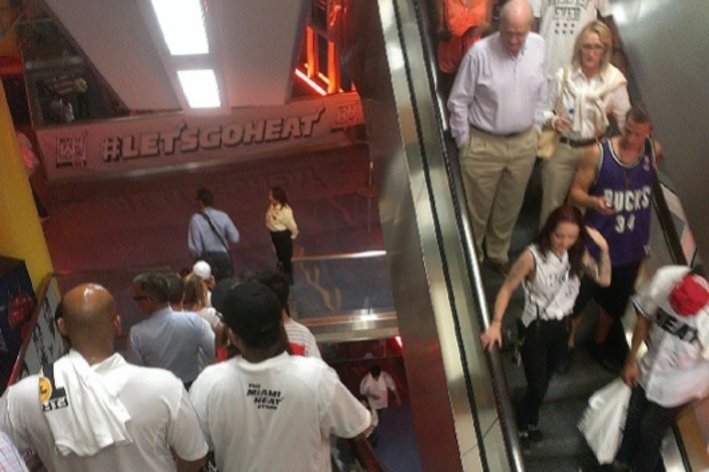 Miami fans leave early, try to get back into arena as the Heat make an improbable comeback

Bosh probably has a right to sling those words at Miami fans.

Fans who stayed watched a classic ending that Bosh played a key part in. After Spurs forward Tim Duncan torched Miami for 30 points in the first three quarters, Bosh responded in the fourth quarter and overtime alongside LeBron James' scoring outburst. Bosh grabbed the key offensive rebound to find Ray Allen for a game-tying three-pointer that forced overtime. He then perfectly read the Spurs' final shot by Danny Green in overtime, blocking the attempt as the buzzer sounded.

Bosh finished with just 10 points, but it was his 11 rebounds, two blocks and three steals that represented the mark he made in the elimination game.