It's been a long and trying road to get to this point, but Game 7 in the NBA Finals absolves a season full of disheartening injuries.

Share All sharing options for: NBA Finals 2013, Spurs vs. Heat: The Game 7 we deserve

It sounds cliched and maybe even a little insensitive to truly believe sports can bring us to a higher place, but Tuesday night's Game 6 between the Miami Heat and the San Antonio Spurs had a real stake in doing just that. There are times when basketball can be transcendent in a few very specific senses, and Game 6 hit all of the marks.

It transcended the still sizable "NBA is rigged" crowd, the Heat's nationwide army of haters, even the X's and O's breakdowns done by your favorite basketball bloggers. The final 17 minutes of Game 6 were meant to be felt, not analyzed. The fourth quarter and overtime were pure bedlam, a very real validation for why so many people spend the majority of their leisure time thinking and talking about about something as trivial as overgrown millionaires playing a children's game.

Game 7 preview: Sleep is for suckers 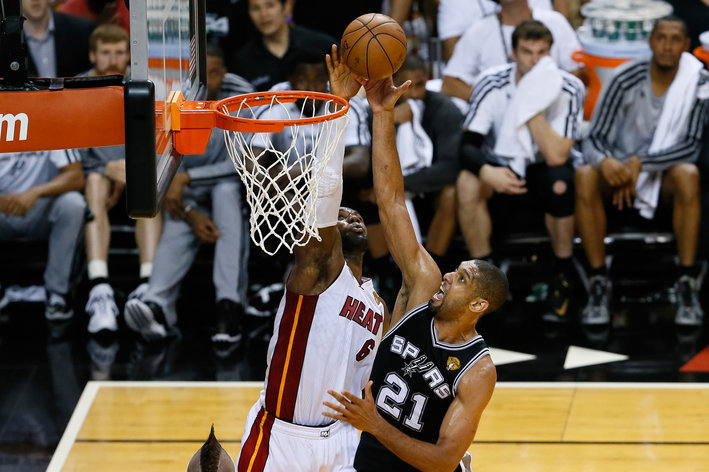 Paul Flannery sets the table for what should be an excellent Game 7.

It is a game, sure, but what happened on Tuesday was so much more. Call it high drama or high art, maybe even just damn good television. But whether you were watching in a living room full of people or freaking out by yourself while desperately trying to keep up with Twitter, Game 6 accomplished sports' greatest goal: it made the people watching it feel something, whatever it was, that does not come around all that often.

Beneath layers of human emotion, the Heat's Game 6 victory also had one very tangible effect: it meant there would be a Game 7 on Thursday in Miami. It's hard to ask for much more.

Game 7. It's stressful just to type. The NBA can feel like it never sleeps, what with the draft being held next week, free agent zaniness starting not long after that and then just a few short weeks of rest before training camp. Nearly a calendar year in the making, it's just another part of what elevates Game 7 of an NBA Finals above almost anything else in sports. It's all the charm of March Madness, only with bigger, better and more athletic players who have embedded your brain with all the necessary context over the course of their careers.

That context is so essential when it comes to actually being moved by watching televised sports. The latest soapbox stand taken by some very smart writers is that the constant referendum on legacies, LeBron James' specifically, needs to stop. This is a noble goal, but it's foolish to believe this isn't how it's always been. It's part of what creates the context, and part of what makes watching these games unfold so intoxicating.

You can't measure up eras in baseball because the best players played so long ago, because of all the new and exciting ways each generation found to cheat. You can't do it in football because there are too many positions. But basketball?

It isn't fair to James, no, but the most serial offenders on sports talk radio or Twitter probably aren't reading your column. That's just the way it is. This is part of the reason people like watching and thinking about the game, and really, it's not hurting anyone. LeBron has said many times that he does not care about his legacy, and we should believe him. He's just trying to win a game, win a championship.

And it's true that only James faces this type of constantly evolving criticism, but it's because he's the only one playing under a different set of circumstances. Tony Parker is a very good player regardless of whether he shoots 6-for-23 from the floor, as he did in Game 6. Dwyane Wade is a top five shooting guard ever, but no one matter how many titles he wins with Miami, he isn't passing Kobe Bryant or Jerry West or Michael Jordan. But LeBron's legacy, as silly as it is to consider in real time, has no floor or no ceiling. That's why we debate, that's a large part of why we watch.

LeBron's legacy, as silly as it is to consider in real time, has no floor or no ceiling. That's why we debate, that's a large part of why we watch.

The fact is James is an incredible talent and an amazing athlete who deserves mass appreciation by the public. His combination of size, speed and skill might not be seen again in the lifetime of the person reading this. He is that good.

But what makes James the best show in sports is that he's human. He makes mistakes and has flaws, because that is what the human experience is all about. Even after he purportedly "conquered his demons" by winning his first title last season, there he was in Tuesday's Game 6 with two critical turnovers and one badly missed three-pointer in the final minute. Of course, he would go on to drain a crucial three, and the mishaps shouldn't overshadow what was a thoroughly brilliant performance in the fourth.

James' legacy will simply be a big part of why Game 7 is must-watch television for so many people, regardless of how irrelevant it is. For the more enlightened basketball thinkers, Game 7 will be only what it represents at its most surface level meaning: one game to decide the championship.

Really, I think we deserve this.

That this NBA season is ending with a terrific Finals makes everything that happens before it irrelevant, at least to the unbiased eye. But don't get it twisted: there were numerous moments during this season that simply felt like a colossal bummer.

Derrick Rose didn't play the entire season while recovering from a torn ACL, despite being cleared by doctors by play on the first day of March, despite the fact that no athlete in modern times has chosen to take a full year to rehab the same injury. As a Bulls fan, the constant criticism of our beloved hometown hero made for a very trying season, even as the team on the court gave it their all every night. Rose was far from the only star crippled by injury this season. He had plenty of company.

Perhaps the Spurs wouldn't even have made it this far had Russell Westbrook not sustained a knee injury in the first round against the Houston Rockets. Rajon Rondo went down with a torn ACL. So did Nuggets forward Danilo Gallinari, just as that team was establishing itself as the league's most fun to watch. That was a designation that could have been awarded to the Timberwolves, but star forward Kevin Love was sidelined for almost the entire season thanks to two major injuries. The Pacers took the Heat to seven games in the Eastern Conference Finals with Danny Granger essentially missing the entire season as well.

Remember Andrew Bynum? 76ers fans don't, because he never played a second for their team after being the centerpiece of a blockbuster trade in the offseason.

And then there's the constantly evolving drama that is the Los Angeles Lakers. That Sports Illustrated cover will endure as a punchline forever, but truth is it was sort of sad to see such a talented bunch never be able to get off the ground. Love or hate the Lakers, the league is more exciting when they're competitive. Any hope of that ended when Kobe Bryant tore his Achilles, perhaps the most disheartening injury to a superstar all year in a season defined by them.

But none of it matters now.

We have a Game 7 between two fantastic teams, and it means everything in the world. It's been a long, strange journey to get this far, but nothing worthwhile was ever earned without a little suffering. Whether you're watching tonight for the silly legacy stakes, for the drama or just because you love the sport, there's enough to pull interest from all sides. There's enough to make the NBA all that matters tonight. In the end, that's a beautiful thing.

• Game 7 preview: Sleep is for suckers

• Spencer Hall: The Spurs are the NBA's team of dads