Bill Simmons really wanted to talk about "The Decision," but, well, ESPN wasn't having it.

This was probably just an honest mess-up where ESPN lost the feed, but it's timed SO PERFECTLY that we have to talk about it.

Tonight is the celebration of one of the greatest players in NBA history, who had one of his greatest games: LeBron James, winner of four MVPs sealed up his second straight title and second straight Finals MVP trophy with a 37-point, 13-rebound effort. Simmons made the mistake of starting to talk about James' biggest mess-up: a PR-deaf moment where he announced his choice to sign with the Miami Heat instead of the Cleveland Cavaliers or any other team.

A PR-deaf moment that happened to be broadcast on ESPN, which is the same channel that Bill Simmons was talking on.

And as soon as he says it — BOOSH — the feed dies. "The Decision" never happened, and we will not talk about it in public.

(Update: Simmons was on set a few minutes later, but when Dwyane Wade came by to get interviewed, he had VANISHED: 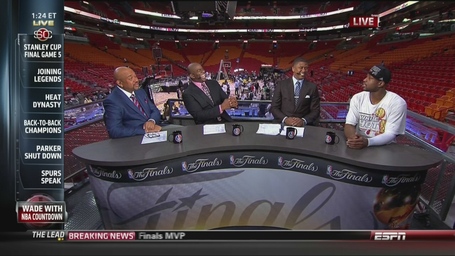 Again, this is pretty commonplace, but, man, they couldn't find another chair?)