The best NBA Finals in many years will be defined by the best player in the NBA today. This is an appreciation of LeBron James and the incredible basketball the Heat and Spurs provided.

MIAMI -- Is it safe to talk about LeBron James now? Ever since he came to this city, it has been practically impossible to carry on a rational conversation about the best player on the planet.

There are those who will forever nip at his heels and tug on his cape, shouting their insults for the benefit of an audience that loves to live in a world of negativity. There are also those who will reflexively defend him to the point where his flaws are dismissed as part of an agenda-driven crusade.

He's not perfect. There are times when he defers when he should attack and others when he settles instead of drives. No player is infallible. He's not Jordan or Magic or Bird. They were all of a different time and the comparison is ultimately futile. At this moment, LeBron stands without peer. He is entering into a special place where his achievements and accomplishments need to be considered on their own merits, and not part of some larger narrative or someone else's career.

There is no redemption without struggle and no victory without a cost.

Never forget that Magic was Tragic once, Jordan was grounded before he could fully take flight, The Dream's career was a recurring nightmare of early playoff exits and Bird lost to the Lakers more times than he beat them. There is no redemption without struggle and no victory without a cost.

LeBron came here three years ago to win championships, and now he has two of them. The first one may have been the hardest, but this had to be the most satisfying. The Heat survived a pair of Game 7s, and in the penultimate game of the series, he met the Spurs' sagging defensive gameplan head on and buried jumper after jumper.

His ability to make outside shots was what allowed him to take his game to an entirely new level this season, and in a game that may as well define him from here on out, he answered the challenge like the great ones do.

James finished with 37 points and 12 rebounds, but the numbers all become a blur after a while. He was the best player on the floor in one of the greatest series any of us have ever seen, and if that isn't enough validation, then we all need to find a new line of work.

"I'm LeBron James, from Akron, Ohio," James said after the game. "From the inner city. I'm not even supposed to be here. That's enough. I'm blessed. So what everybody say about me off the court, don't matter. I got no worries." 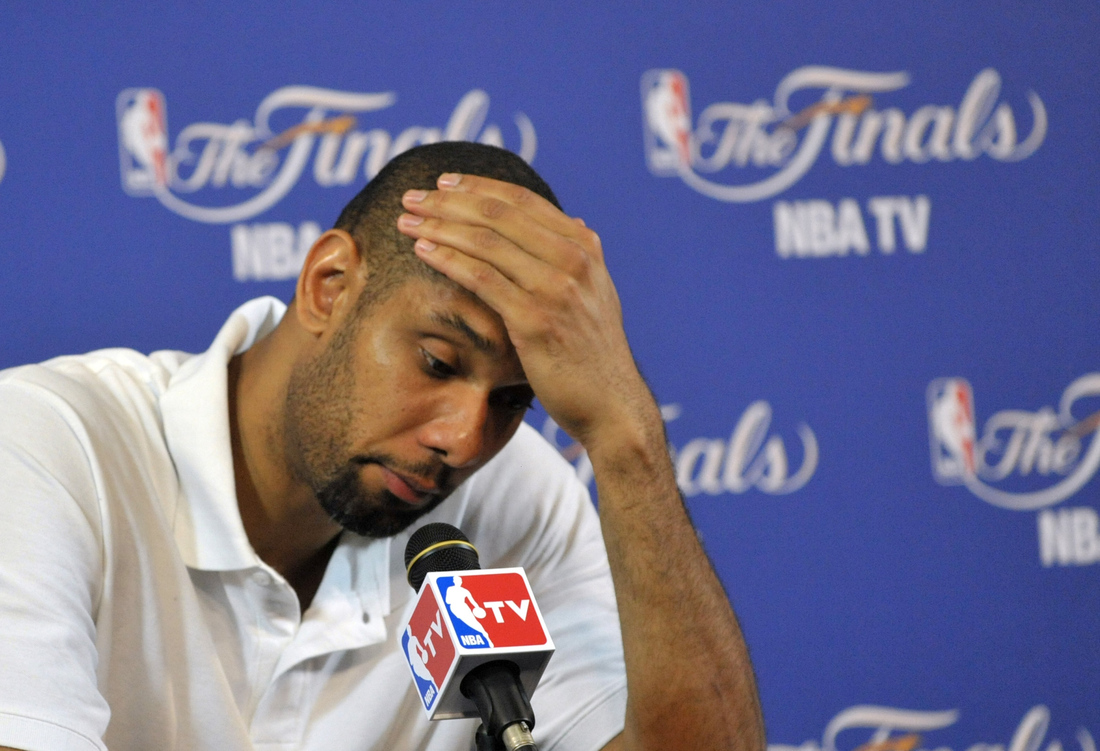 We came into Game 7 expecting to be let down and instead we were rewarded with 48 more heart-stopping minutes. Every time the Heat looked like they were going to pull away, the Spurs had another answer. Whether it was 21-year-old Kawhi Leonard playing like a ten-year vet or 37-year-old Tim Duncan performing like a man a decade younger, the Spurs wouldn't relent.

It was their refusal to bow to Miami's unique ability to kick into a higher gear that made the series so special. Someone had to lose, and it must have torn their hearts out because there may never be another chance for this group that has accomplished so much in their careers. There was nobility in defeat, as crushing as it was.

Gregg Popovich described waiting for Game 7 as torture. "It's hard to appreciate or enjoy torture," he said before the game. After it was all over, he relented a bit.

"Even in defeat, I'm starting to enjoy what our group accomplished already, when you look back. And you need to do that, to put it in perspective."-Gregg Popovich

"It was a great series, and we felt that," Popovich said. "I don't know if ‘enjoy' is the right word, but in all honesty, even in defeat, I'm starting to enjoy what our group accomplished already, when you look back. And you need to do that, to put it in perspective.

"So it's no fun to lose, but we lost to a better team. And you can live with that as long as you've given your best. And I think we have. We just didn't play well. And a lot of that had to do with their pressure, their defense, a lot of contested shots. Their athleticism was just tough for us to handle. And it finally showed a little bit in the seventh game. But they hung in as well as they could."

It was impossible not to feel empathy for the Spurs, especially Manu Ginobili, who feels these losses as much as anyone. Manu was alternately brilliant and bewildering, as is his nature, and while he drained a huge three in the final moments and finished with 18 points, he also had a handful of inexplicable turnovers.

"You know, there's such a fine line, such a fine line between being celebrating and having a great summer," Ginobili said. "With now feeling like crap and just so disappointed."

Or for Duncan, who rallied for a 24-12 line after many of us suspected that he had taken his best shot in Game 6. But there was a layup that could have tied it that didn't fall and that's the one that will linger.

"Game 7 is always going to haunt me," Duncan said. 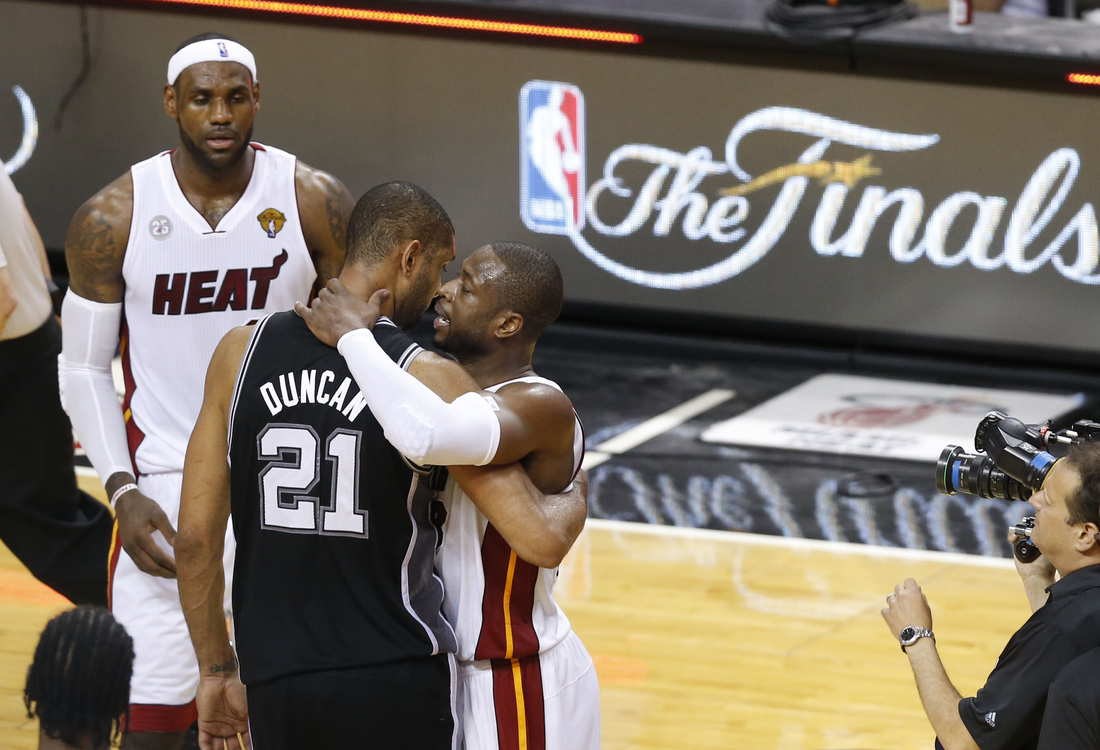 This wasn't a series for assigning blame. It was a series to be cherished and enjoyed. It was played at the highest level and, on balance, the blowouts were evened out with some of the most thrilling basketball any of us have ever seen. It was validation for the entire sport.

From Tony Parker's magical shot in Game 1 to Dwyane Wade's renaissance in Game 4, and all the way through Ginobili's spiritual revival in San Antonio and Ray Allen's corner three in Game 6, there was enough space for all of these legends to carve out a place in this series.

There was also no need for histrionics or inflated storylines, no fake tough-guy posturing or veiled trash talk through the press. The closest anyone came was Danny Green, who suggested after Game 3 that James was beating himself, which A) may have been true and B) wasn't exactly fighting words.

There is mutual respect and admiration on both sides of the aisle here, which was evident in the moments when it concluded as Pop sought out LeBron and Wade to congratulate them. The Spurs don't need to try and get in anyone's heads. They know how good they are and how brilliant their coach's gameplans are. The Heat have been through it all before and seemed almost relieved not to have to engage in such pettiness.

At the end of the day, both teams were true to themselves and their natures. They let the game decide the outcome. It was great theater throughout, but it was even better basketball, and the sport is richer for it. 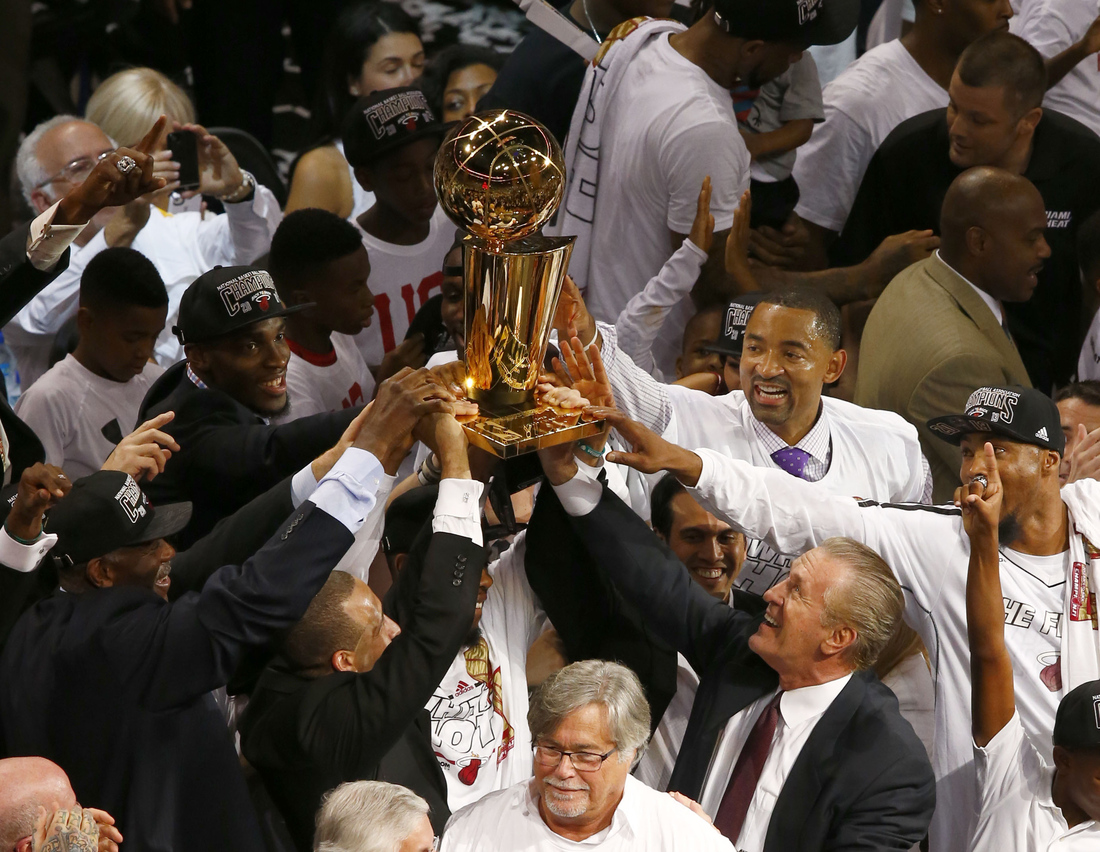 We need to talk about the Heat and how they turned the sports world on its head three years ago and dared everyone to come at them. They repelled challenges from the Bulls, Celtics and Pacers over the years. Brutal, physical series that tested their abilities and forced them to come together, not only as individuals, but also as a team.

It's weird to describe them that way since so much of what we talk about when we talk about the Heat is the personalities. They needed one another three years ago, whether anyone wanted to acknowledge it or not. This sport is too difficult for one man to do it alone, and as brilliant as LeBron was, he couldn't have done this without Wade recovering his game midway through the series or Chris Bosh's defense.

They never would have even arrived at this point without Allen's incredible shot at the end of Game 6, and if not for Shane Battier making six-straight threes in Game 7, we'd be crowning the Spurs this morning.

"We needed it. We needed every inch of what everybody had."-Dwyane Wade

"We needed it," Wade said. "We needed every inch of what everybody had."

The Heat owned the 2012-13 season, winning 66 games in the regular season and rattling off 27-straight victories. We thought they were going to roll through the playoffs and maybe pull a ‘fo-fo-fo,' but this was better. They had to earn this championship. It wasn't given to them and it wasn't awarded by decree. It was harder than anyone expected and that's what made it so memorable.

It's in these moments that legacies are ultimately created, not in the daily blather of hot takes and media bullshit. It's far too soon to put them into a historical context, but winning back-to-back championships has earned them a place in the conversation.

"The vision I had when I decided to come here is all coming true," James said. "It's an unbelievable feeling." 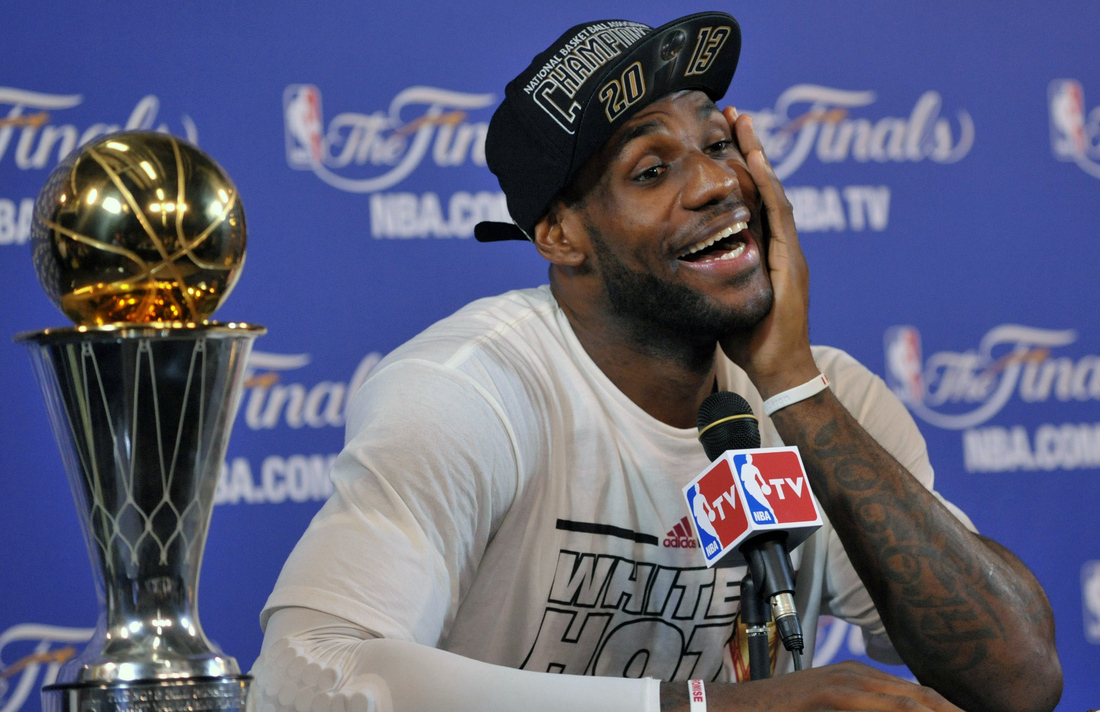 Ultimately, the night, like the season, belonged to LeBron. It always comes back to him eventually. He has four MVPs and two titles. He earned them by playing his game, by not succumbing to the constant pressure to be someone he is not. He did it his way and his way has been proven correct.

"Hopefully people will leave him alone a little more now," Battier said, but it doesn't really matter. LeBron James is a part of history now and only a fool would choose to ignore it.

Game 7 was his crowning achievement but there is so much more left to tell. We should allow it to happen and watch it unfold to appreciate it fully. In time, we can consider all the rest of it, but for now LeBron stands alone and the game belongs to him.

• Lesson of the Spurs: Hang on | Duncan's sustained brilliance

• Video: No Bill Simmons, you can't talk about "The Decision"