With the likely departure of Doc Rivers to the Los Angeles Clippers, the Boston Celtics' long-delayed rebuilding effort can finally begin in earnest.

This was always going to end weirdly. Doc Rivers is going to the Los Angeles Clippers pending league approval, and the Celtics are the new owners of an unprotected first-round pick in the 2015 draft. Kevin Garnett is not going with him, as league sources told SB Nation that the NBA office would only approve one of the two proposed Celtics-Clippers transactions, not both.

Garnett is likely to stay in Boston now. He has a full no-trade clause and the Celtics have always viewed his presence in the locker room and in practice as invaluable components of what he brings to the floor. Ubuntu may be dead, but a large part of their culture still remains in place, although one can't help but wonder what KG and Rajon Rondo are thinking right now.

The Doc deal was dead and revived so many times that it became impossible to keep track of the many starts and stops. Such is life when dealing with the Clippers and the many voices in their front office. In the end, the wishes of Chris Paul, who will be a free agent on July 1, may have carried the most sway.

Rivers is a tremendous coach who grew into one of the elite in his profession during his time in Boston, but few coaches are irreplaceable. The bottom line in this league is talent. The Celtics have access to more talent than they did when they finished the season on such an unsatisfying note. While it stings a city that came to love him, if Rivers' heart wasn't in a rebuilding process, what's the point of having a $7 million coach?

Meanwhile, this was a deal the Clippers had to make. The risk of losing Paul is too great and Rivers is a perfect coach for a team with championship aspirations. 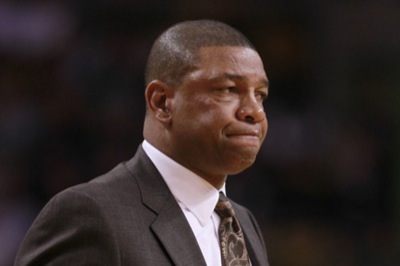 This isn't step one for the Celtics' rebuilding process. That began at the 2011 trade deadline with the acquisition of Jeff Green and continued through the draft with players like Avery Bradley and Jared Sullinger. In acquiring a first-round pick for an expensive coach who expressed reservations about seeing this through the long haul, Danny Ainge did pretty well for himself.

It's not the endgame either, not by a long shot. What Ainge is doing is collecting assets, similar to what he did in the pre-KG era. The Celtics believe strongly -- and correctly -- that championships are won with true franchise players. If one becomes available, they want to be in position to acquire him.

Left out of the equation for now is Paul Pierce. The C's can buy out the final year of his $15-million contract for $5 million by midnight on June 30. If they keep him beyond that date, they could also use the amnesty clause on him, which would knock the entire $15 million number off the cap sheet. Dumping Pierce doesn't get the Celtics under the salary cap, but it does get them under the luxury tax. If Ainge can find a new home for Jason Terry and/or Courtney Lee, each of whom have two years left on their contracts, then the rebuilding effort can really kick into gear.

Their preferred method for moving Pierce is still a trade, but however it ends, it seems that his days in Boston are numbered. He has no leverage, which is a rather horrible set of circumstances for an iconic player who has spent his entire career in Boston and will have his number retired seconds after he's done playing. That's the price of rebuilding, and while everyone understands the consequences, it's still an emotional hit.

But if the 2012-13 season taught us anything, it's that it was truly over. Ainge held on to his core for so long that it refused to die of natural causes. His veterans kept coming back for more and until this season they always validated that decision. The Celtics were a mediocre basketball team even when everyone was healthy, and when injuries hit -- as they always do -- they were worse. Their first-round playoff exit was numbing. They set new lows for scoring futility against the Knicks, and while they found just enough resolve to make it competitive at the end, it was painfully obvious that it had to finally end. None of them wanted to go into a full rebuilding mode, but that's where they are. They have been passed by the Bulls and Pacers and their battles with the Heat are a distant memory. The Knicks and Nets also lapped them in the Atlantic Division.

Rivers' strange exit is the first domino and he leaves behind a complicated legacy. He was the coach of the best team the Celtics had since the end of the Larry Bird era, and as much as anyone, Doc was the public face of everything the C's wanted to stand for on and off the court. He was tough and fiercely loyal to his players, which makes his departure all the more painful. 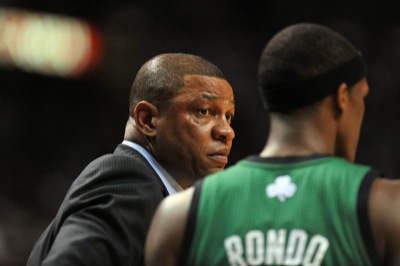 Tom Ziller on the reported confrontation between Doc Rivers and Rajon Rondo.

He mended a fractured relationship with Pierce, survived the ups and downs with Rondo and thrived with the equally strong-willed Garnett. The key moment of his tenure was when he convinced his players prior to the 2008 season that the time to win was now and they responded with a 66-16 season and the first championship in 22 years. It should also be noted that he was an eloquent voice in the aftermath of the Boston Marathon bombing.

In 2011, he surprised everyone by agreeing to a five-year deal and the team made his (in)famous "I am a Celtic" line a key part of their marketing strategy. In leaving for a team ready to win now, Rivers ultimately made the same decision that Carmelo Anthony, Dwight Howard and others did when they forced their way out of their respective cities. The difference is that Rivers wasn't at the end of his contract and that he left all that behind for a job with Donald Sterling.

This is Boston, where it's been said our three favorite pastimes are politics, sports and revenge. No doubt, Rivers will feel the effects of a jilted fanbase. But in time, the full measure of his accomplishments needs to be considered. He coached more Celtics games than anyone other than Red Auerbach and ranks third in wins and playoff victories.

It remains to be seen if he jumped or was pushed, but Rivers' departure was a strange end to a bizarre chapter in franchise history and it's only the start of a long, crazy summer for a rebuilding process that won't be easy or without complications.

• CP3 will stay for Doc | Ainge to Boston's sideline?

• Is being a fan worth the pain of losing?