Why would anyone watch the Miami Heat NBA Championship parade? The answer depends strongly upon how much you like seeing people in sleeveless shirts.

The LeBron Cam is not wielded by LeBron, who is busy. It is, however, on the same bus as LeBron, and was trained on LeBron, who is quite probably pyrotechnically hungover. "It was a late night for him," notes Rhiannon Ally, one of the CBS4 newscasters tasked with chirpily tying together various sluggish helicopter feeds and whipsaw hand-held videography of the Heat's team bus moving through Miami. "He was tweeting from Club Liv at 5am." She'll revise that time backwards during the broadcast: to 4am, then 3am. At any rate, it was late. But not that many hours later, and 30 minutes after a rain-delayed start, LeBron is there wearing sunglasses and holding an unlit cigar, on a bus. The on-a-bus thing will not change for some time, although James does periodically duck to avoid being beheaded by various highway overpasses. "He's kind of in chill mode, isn't he?" Ally notes. Her partner agrees. LeBron is in chill mode.

Obviously you're not supposed to watch a parade on television, and especially not on a splotchy online feed punctuated by ads for South Florida car dealerships, which play every time the feed stalls and needs to be reloaded. If there's a thing that's great about parades -- besides the sweaty inertia and the craning and the day-drunks and the many wonderful smells, of course -- it has to do with the deep, thrilling and weird buzz of mass humanity. (And again, that's a strong "if," as there's nothing about an in-person experience of your average St. Patrick's Day parade that is significantly more illuminating or enjoyable than looking at an Instagram photo of a dented green plastic hat sitting in a puddle of Coorsbarf.) The being there is the thing.

In that sense, it's sort of the same thing as being at a basketball game, except -- in the case of the Heat's NBA Championship Parade in Miami -- instead of everyone watching and getting excited about something happening on the court, everyone is sort of waiting sweatily for a bus to roll by, slowly, with Mike Miller and James Jones standing on it. Portions of the parade route had a notably CGI Crowd Scene vibe -- all these people not so safely aboard this not-built-to-support-people street sign, just to increase their chances of getting sprayed by Birdman's SuperSoaker -- and others seemed about as heavily populated as they might during a slightly busier than average lunch hour. The whole thing took a little over three hours, and ended with the "Harlem Shake" on loop and Heat players sort of dancing and mostly milling around onstage at American Airlines Arena, and I watched all of it. 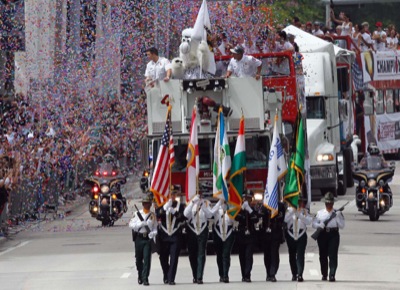 Hot Hot Hoops was there.

For the most part, I stuck with the feed of Miami's CBS4, which delivered exactly the sort of aggressively inane coverage called for by a long parade on a hot day. The Heat's parade wound through downtown Miami en route to the American Airlines Arena, where season ticket holders had the opportunity to watch some videos and enjoy Chris Andersen's distinctive Juggalo diction and listen to Shane Battier be humble and Dwyane Wade not be humble in air-conditioned comfort. By that point, the coverage was easy: point a camera at the various things that were happening, be they Heat broadcasters interviewing Heat players or the odd video bits -- Kim Kardashian and Pitbull and Barack Obama photoshopped under Norris Cole's high-top fade, that sort of thing -- or DJ Irie doing some crowd-work with an assemblage of posh, poreless Heat season ticket holders and their very excited kids.

The energy level in the arena was about on par with what you'd find at an especially protracted Bar Mitzvah. DJ Khaled's "All I Do Is Win" plays, possibly at Irie's behest and possibly just because the sheer volume of doofy triumphalism in the arena wills it to pump through the speakers, and Irie yells out "Miami we some winners, y'all" and the crowd sort of goes nuts and sort of is probably on Instagram. The opening bars of The White Stripes "Seven Nation Army" are lock-grooved for something like three minutes as everyone on the roster gets introduced and makes their way to folding chairs on the corner of the stage. They're all wearing shorts. So: this is all about what you expect. This was not the fun part.

To the extent that there was a fun part, it was watching the CBS4 team try to cover the stop-and-go passage of the parade's various buses and party trucks -- because this is Miami, one truck was populated by women in tiny white shorts kind of politely twerking, as well as a man in a banana costume and white-framed sunglasses -- as if it was news. People lined the parade route, cheering on team employees and a bus with a capri-clad Pat Riley ("we're told Alonzo Mourning is in the back," Ally reported of this bus) and, much later, buses with Wade and James and Bosh, the last of those three entrusted with the Larry O'Brien Trophy, which he hugged as if it were a wriggling toddler. And that was it, that was the whole thing: people cheering and that, a bunch of buses humping through what looked like miles of idle construction sites and a windowless mall with a Ross Dress For Less in it.

And so the job that CBS4 had, during all this, was to make this seem like something else. Ally, in particular, attacked this with vigor, commenting on James' floral-print baseball hat (she liked it) and, later, on the way it matched his son's floral-print baseball hat, which she also liked. "Dwyane Wade, he's always hilarious on Twitter," she said, by way of segueing to a picture Wade tweeted, very hilariously, of his bespoke championship socks. Every now and then a spume of confetti would shoot out from the buses in the direction of, like, a Chevron station and the broadcasters would note it. Sports anchor Jim Berry provided some faintly passive-aggressive basketball-related white noise -- "There are still fans out there who are haters, in other cities," he noted at one point -- and the anchors and reporters in the field did the rest, interrupting one bit of here-is-what-you-are-seeing reportage with another.

Lisa Petrillo cut herself off with the breaking news that she made eye contact with Udonis Haslem, who gave her a little salute. Berry felt compelled to break into his monologue on Heat fans -- whom he cast as grateful and lucky to be in the presence of such hard-working athletes and repeatedly noted were "not spoiled at all" -- with a description of whatever was on the screen at that moment, even if it was just the Heat's mascot nodding emphatically in that way mascots do. There was much filibustering struggle to describe things that don't need describing. Here's something that got said: "Take a look at that railroad crossing, if you will." It was all very urgent for something that was only barely happening.

And then over to the correspondents! Marybel Rodriguez, a brusque, orange-haired "Sabado Gigante" veteran is in with whooping fans and an innumerable mass of little kids in sunglasses and LeBron jerseys; she interviews the kids and cuts them off, encourages the crowd to cheer and then shushes it with rapid-fire okayokayokays. She has the vibe of an exhausted teacher leading a middle school field trip to a Mountain Dew bottling facility. She mentions later that she's been there since 4:30 that morning.

The coverage is overmatched and happy and ragged, and if it isn't exactly good television it also about matches the form with the content. And it could, as the horrifying puppet below makes clear -- Why does he have a little felt glottis at the back of his throat? Why does he have a headset? Why so much and so many times? -- have been much worse. Just let that Vine bump with the sound on a few times. A few more times. This is probably what it was like to be at the parade. And then it all went inside.

In the arena, it's darker and the broadcast feels colder. Sleevelessness is endemic, and jerseys and shirseys are popped defiantly by any and all on camera. Little kids do Gucci Mane type things with their fingers. These are the Heat fans that those Haters In Other Cities hate, and the ones that show up at games and on television. Over on SunSports, Heat broadcaster Jason Jackson spoke, during the parade, about how "this franchise is about family, and they're showing here that it's about extended family." So the distant cousins and trailer in-laws and black sheep unemployed auto-detailer nephews are there outside in the heat, cheering and craning. The vibe on the inside is very inside.

You might think the pace would speed up, here, but this is still a slow bus moving. A parade of Miami-Dade councilfolk take the stage and are introduced. The mayor and the mayor's chief of staff. Someone named Esteban "Stevie" Bovo Jr. The audience of season-ticket holders are palpably on their smartphones at this point, barely bothering to applaud after a while. "You want to talk about the pulse, the lifeblood of an organization?" DJ Irie says by way of psyching the crowd up. "It all starts with the season-ticket holders, baby!" Everyone applauds themselves.

And then the players: Udonis Haslem modest and admirable; Battier an appealing young Congressman as ever; the end of the bench interviewed en masse, Birdman a tie-dyed cliche machine. Dwyane Wade is almost holy in his smugness, ethereal and chortling and poignantly artificial in his attempt to appear to be anything but feeling himself very, very hard. It piles up, and then there's the Harlem Shake video on the screen -- this is after the LeBron interview, which is very confident and fairly endearing in the manner of late-period LeBron; this is the kicker of the whole thing. And then a sort of Harlem Shake re-enactment, and then it's over. The organization's lifeblood flows from the arena and back into the streets, which are off-camera. There's some on-air talk about doing it again next year, and then CBS4 joins "The Talk," which is already in progress.