NBA Draft 2013: Where would Jeremy Lamb be picked this year?

Since he barely played last season, Jeremy Lamb is essentially going to be a rookie in 2013-14. Where would he go among a deep crop of shooting guards if he was in the 2013 NBA Draft?

Share All sharing options for: NBA Draft 2013: Where would Jeremy Lamb be picked this year?

In the aftermath of the Thunder's second-round loss to the Grizzlies, criticism of the James Harden trade reached a fever pitch. Without Harden, Russell Westbrook's injury left Oklahoma City woefully short-handed in the playoffs. Harden, meanwhile, emerged as one of the best players in the NBA in Houston, blossoming from sixth man to MVP candidate.

What did the Thunder get in return? Kevin Martin, Jeremy Lamb and the No. 12 pick in a "weak" draft.

Leaving aside whether they should have traded Harden in the first place, the big question has been whether that was the best package they could have received for him. Martin, an impending free agent who imploded in the playoffs, may not return. Lamb averaged only three points a game as a rookie, spending most of his time in the D-League.

Lamb could easily have been a top-five pick in this year's draft.

A closer look at Lamb's game, though, reveals an extremely interesting prospect. He's one month younger than Victor Oladipo and eight months older than Ben McLemore. Lamb could easily have been a top-five pick in this year's draft.

In evaluating him, the first thing that stands out is his prodigious reach. He's fairly slight at 6'5 and 180 pounds, but his 6'11 wingspan allows him to play much bigger than his size. He's an excellent shooter with good ball-handling ability who can shoot over the top of almost any perimeter defender. As a result, it's fairly easy for him to create his own shot. Even at the NBA level, Lamb will be able to rise and fire over most perimeter defenders. He can always dribble into a decent shot, making him a bona fide primary option on the offensive end.

What separates Lamb from many of his peers at the shooting guard position is his feel for the game. The NBA is flooded with guys who have Kobe Bryant's shot selection without the transcendent talent to make up for it. Lamb, in contrast, is a smooth player who rarely gets sped up. Everyone worries about whether scoring guards are "too passive," but generally the opposite is the problem. No one's ever accused Nick Young or J.R. Smith of passivity. The statistics bear this out. Lamb has always been an efficient scorer.

While he's not as refined in the other aspects of the game, he has a pretty complete skill set. He may not quite be a dunk contest guy like Terrence Ross, but he had a max vertical of 38 inches at the Combine. Like most young scorers, his defensive awareness is still a work in progress, but he has the tools to be a good defender. His length allows him to hold his own on defense and fill up a stat sheet. 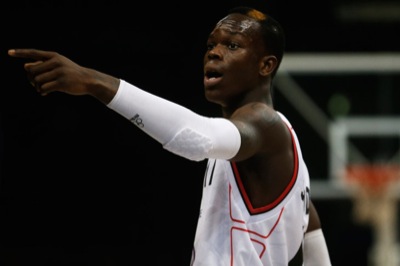 Jonathan Tjarks on the rise of several raw international prospects.

All in all, he's a prospect with excellent size for his position, high-level athleticism and skill. So how did a two-way shooting guard with Lamb's elite scoring ability slip to No. 12? Like many undervalued prospects, he was a victim of circumstance in college.

Not every situation in college is perfect, but few were more dysfunctional than Lamb's final season at UConn in 2012. As a freshman, Lamb was the second banana who helped Walker lead the Huskies to the 2011 national title. Unfortunately, as soon as Kemba left, the program began to crumble. Without Kemba, the Huskies had only one upperclassman -- junior big man Alex Oriakhi -- in the rotation. Everyone else was either a freshman or a sophomore. There wasn't much of a veteran presence on the team, which isn't usually a stable situation. Jim Calhoun, their Hall of Fame coach, missed a month for medical reasons. NCAA investigators were circling. Ryan Boatright, their dynamic freshman point guard, spent a huge chunk of time in NCAA limbo. APR penalties, which made UConn ineligible for the 2013 NCAA Tournament, loomed over the entire program.

By the time the Huskies lost to Iowa State in the first round of the 2012 NCAA Tournament, the program had fractured in a million pieces. Calhoun never coached again, retiring in September. Because of the APR penalties, every player on their roster could transfer without penalty to a D1 school. Oriakhi and Roscoe Smith, their two most experienced big men, bolted. Lamb, along with Andre Drummond, read the writing on the wall, leaving for the NBA draft. If they had stayed, they wouldn't even have been able to play in the NCAA Tournament.

As a result, despite his immense once-in-a-generation talent, Drummond slipped all the way to the No. 9 pick. Unlike Lamb, who wound up on a contending team with little use for rookies, he was allowed to play immediately, becoming a rookie sensation for the Pistons. The whispers about Drummond were about his maturity while Lamb's concerns had more to do with his leadership ability, but either way, personality concerns tend to be overrated. Oklahoma City doesn't need leadership from a 21-year-old in his second season in the NBA.

Next season, Lamb should be able to fill Martin's role as a scorer and shot-maker. The Thunder could have the most athletic second unit in the NBA, with Reggie Jackson and DeAndre Liggins flanking Lamb on the perimeter. Jackson is the playmaker and Liggins is the defender, so Lamb will be able to focus mainly on scoring. The Thunder have never been afraid to take a chance on younger players, and there's nothing in his resume to suggest he won't be up for the challenge.

If Lamb were in this year's draft, I would take him over Oladipo and McLemore, both of whom are likely top-six picks. Oladipo is the better defensive player and McLemore is the better shooter, but if I'm taking a shooting guard that high in the lottery, I want a guy who can consistently create his own shot and have the offense run through him. You can find 3-and-D shooting guards anywhere. Danny Green, as you have probably heard, was drafted No. 46 overall in 2009.

As painful as the Harden trade was, the upside is pretty tremendous. The Thunder won 60 games this season, their three best players are all under 25 and they are adding a guy who could have been a top-five pick to their rotation. Given the fiscal constraints of their market, replacing Harden's production wasn't enough. They had to replace his production at his salary slot. Lamb is locked into a team-friendly contract until at least the 2016 season, where he will make only $3 million dollars.

Of course, if Lamb lives up to his potential, Oklahoma City will eventually have the financial dilemma they had with Harden. At that point, the obvious solution would be to flip him for lottery picks and start the cycle over. They are the ultimate "Moneyball" team, not because of an emphasis on stats, but because evaluating and developing young talent will always be the greatest market inefficiency in professional sports. The Thunder are thinking long, not short. Kevin Durant is 24, which makes their title window ... 2026?

• Cavs offer No. 1 pick for Aldridge, Blazers say no

• Ziller: Darko and the million ways to go bust