Oh no, John Wall got some tattoos, don't tell the Wizards

How can we ever trust John Wall again after he got some ink?

Share All sharing options for: Oh no, John Wall got some tattoos, don't tell the Wizards

Important news out of D.C., everyone. A 22-year-old has changed his mind and Jason Reid of the Washington Post is ON IT.

John Wall, who once projected an image as a clean-cut young man who liked to Dougie and play basketball in a wholesome way, has gotten some tattoos, as 20-somethings often do. He showed his fans what they look like via social media, as pro athletes often do. And because of these SHOCKING revelations, Reid thinks the Washington Wizards ought to think twice about forking over a fat contract to the point guard.

Posing shirtless recently for an Instagram photo, Wall revealed several tattoos. Wall's interest in body art is surprising, considering he previously said he did not have tattoos because of concerns over his image for marketing reasons. Many NBA players do have tattoos, and Wall isn't breaking new ground in sharing his ink with fans through social media.

But not every player flip-flops on a topic in such a public way. Factor in that Wall is expected to receive a huge payday from the Wizards next month, and the timing of his tattoo revelation raises questions about his decision making. For a franchise with a history of backing the wrong players, that's food for thought.

To review: a 22-year-old who previously said he was not interested in getting tattoos has changed his mind and gotten some (tasteful, non-facial) work done. This raises questions about his decision making. Also, the Wizards once had a No. 1 pick with tiny hands, a star who took 30-footers with some frequency and brought guns to the locker room and a preps-to-pros dude who solicited an undercover cop and celebrated Lapdance Tuesdays. So, you know, BE CAREFUL WITH THE TATTED UP NBA PLAYER, Wizards. 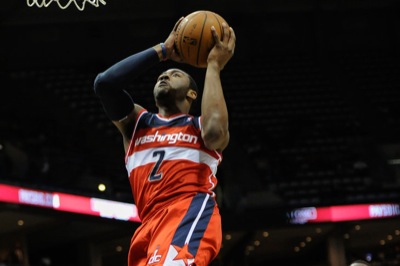 Bullets Forever explains how Wall made strides this year.

This is the most column-y column you could write about John Wall. Angst toward a reality of youth culture (ink, in this case)? Check! Unfair comparisons between the player in question and the league's biggest stars (LeBron James, Kevin Durant and Derrick Rose in this case)? Check! Reliance on vague "it raises questions!" posing instead of, you know, actual arguable and defensible opinions? Check!

Reid even kneecaps his own take right in the middle of the column by citing another goodie-two-shoes gone rogue.

Durant, who cultivated a broad-appeal persona, did throw fans a change-up a couple of summers ago by unveiling his "business tattoos," which cannot be seen when he's wearing his jersey. Before he shook it up, though, Durant already had established himself as a potential great. Even if Durant had tattoos all over his face, the Thunder would have offered him a maximum extension. He's that good.

So what you're saying is that talent and production are better indicators of basketball value and contract worth than is the presence of tattoos? That Durant continued to excel at basketball despite getting tattoos because he's, uh, good at basketball? Huh. Who'd have thunk it?

The bottom line is that whether John Wall wants to be clean-cut or gets inked, whether he Dougies or foxtrots, whether he reads the New Testament or Hitchens, whether he drinks cognac or Malbec, whether he takes Metro or his Maybach -- it doesn't matter.

To ink or not to ink is a personal preference, like all of the above mentioned choices. Preferences change, especially during that wild time known as young adulthood. This is about a 22-year-old changing his mind about something wholly inconsequential to his employer, or, really, anyone but himself.

If you want to question whether Wall deserves a max extension, there are plenty of basketball-related issues to discuss, like his jumper, his defense, his health or his actual potential to reach star status. A trip to the tattoo parlor, some three-year-old quotes and a selfie? Come on.