A shocker with the No. 1 pick: The Cavs took Anthony Bennett out of UNLV, ending a secretive draft process from the Cavs.

There was a surprise from the Cleveland Cavaliers, as they selected UNLV freshman forward Anthony Bennett with the No. 1 pick in the 2013 NBA Draft.

The Cavs were supposedly choosing between Alex Len and Nerlens Noel, but shocked everyone when David Stern came to the podium and read Bennett's name. It was the culmination of the most secretive draft process by a No. 1 team in recent memory, as normally the top pick leaks out hours, if not days or weeks, ahead of time. Bennett was barely even in consideration, as Len, Noel, or even a trade were considered much more likely options. 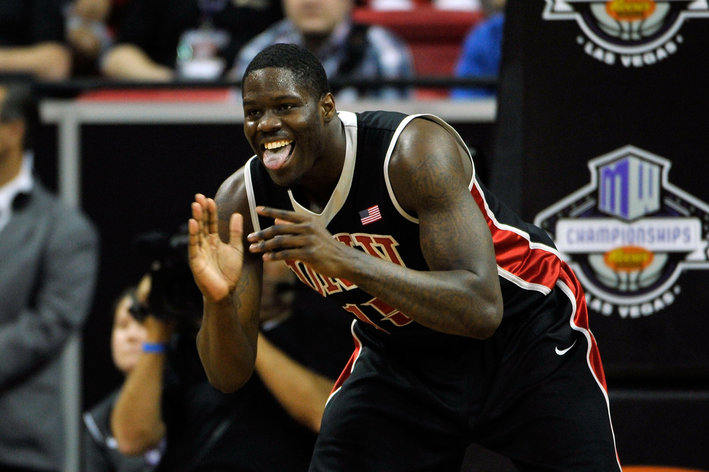 Anthony Bennett is one of the top prospects to come out of UNLV in quite some time.

The UNLV forward is coming off shoulder surgery but is believed to have all the physical tools to be a powerful scorer at the next level. Bennett led the Rebels in scoring and rebounding with 16.1 points and 8.1 boards per game in a season that saw UNLV pile up 25 wins and reach the NCAA Tournament. He was imposing physically in college and should continue to be a threat at the next level. Add that to his athleticism, and Bennett has the body to contribute right away.

The Cavs will have to watch Bennett closely, as he has a history of injuries. He underwent rotator cuff surgery in early May that will keep him out of commission for four months. This means he won't be able to play in summer league games, but should be ready for training camp. There are also questions about Bennett's defensive intensity that he must address in the pros.

Bennett is an intriguing addition to the Cavaliers. Could the team eventually run a small lineup with a frontcourt featuring Tristan Thompson and Bennett? While Kyrie Irving is the Cavaliers' primary playmaker and scorer, Bennett's diverse offensive skill-set could ease the pressure on Irving and give Cleveland another player who can create his own shot. Bennett could also be a solid pick-and-roll partner with Irving, considering his ability to pop for jump shots or roll, using his strength to draw fouls at the basket.

The Cavaliers do have Tyler Zeller and Thompson plugging the frontcourt holes, not to mention veteran Anderson Varejao — but there isn't much depth at the small forward slot. If Cleveland sees Bennett as someone worth developing into a small forward, there's playing time easily up for grabs behind Alonzo Gee and perhaps in front of him when Gee's contract ends next season. Even if the Cavs want to keep Bennett as a power forward, there's likely a three-man rotation that can develop if Cleveland ships Varejao away to open up playing time.

• Tjarks: How international scouting has changed