NBA Draft 2013: Ben McLemore says he will 'definitely' have a chip on his shoulder

Ben McLemore fell out of the top five of the 2013 NBA Draft and will have some extra motivation as he begins his NBA career with the Sacramento Kings.

Share All sharing options for: NBA Draft 2013: Ben McLemore says he will 'definitely' have a chip on his shoulder

Ben McLemore, widely projected to be selected in the top five of the 2013 NBA draft, fell to the Sacramento Kings with the seventh pick overall. The Kings happily selected the dynamic shooting guard, who made it known he felt slighted after falling out of the top of the lottery.

During his post-draft press conference, McLemore said he will "definitely" have a chip on his shoulder to start his NBA career, reports Henry Abbott of ESPN's True Hoop: 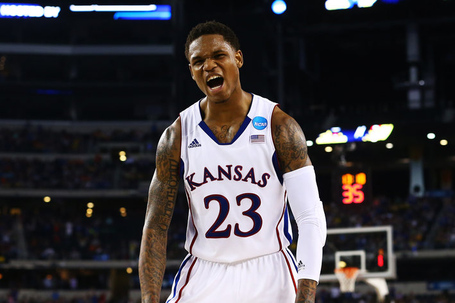 The shooting guard is seen by many as the top perimeter player picked in the 2013 NBA Draft.

I can definitely say I come in with a chip on my shoulder. I can be an alpha dog and take over games.

Coincidentally, the Kings were interested in trading into the top five in order to draft McLemore. Things lined up perfectly for Sacramento, as they still drafted "their guy", did not have to give up any extra assets and were even given a free "chip" to put on his shoulder.

Now, they have an extra-motivated rookie to add to their roster next season as they enter a new era under different ownership.