There was a time when few people in the nation knew who Kelly Olynyk was, and that time was just one year ago.

Share All sharing options for: Kelly Olynyk's journey from redshirt to Celtics jersey

In the eyes of most NBA fans, there is only one image of Kelly Olynyk -- the floppy-haired, headband-wearing 7-footer who established himself as a high-caliber prospect at Gonzaga and lived out his dream by shaking David Stern's hand as the No. 13 overall selection in the draft.

But for everyone that followed Olynyk during his early days with the Bulldogs, the beginning of his college career didn't always hint that he'd one day be tabbed as a first rounder by a storied franchise like the Boston Celtics. Haven't heard of any accomplishments from Olynyk's freshman and sophomore years? That shouldn't be too much of a surprise because they were rather forgettable.

Out of all the players in the 2013 NBA Draft, few used the redshirt year to their advantage as well as Olynyk and the Gonzaga coaching staff did. Olynyk entered Gonzaga in 2009 with high hopes, but quickly found himself stuck behind the rest of the Gonzaga big men. 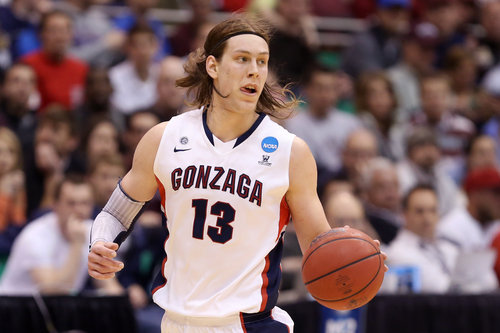 The Gonzaga big man came out of nowhere to become one of the top offensive forces in college basketball, but will his game translate well to the pros?

He played for the Canadian national team in 2011, but finished with just 5.8 points in 13.5 minutes a game the same year for Gonzaga. In front of him were the more entrenched Robert Sacre, Elias Harris and Sam Dower. Gonzaga had the problem any coach would love to take -- too many bigs and not enough minutes, but it wasn't a problem that Olynyk enjoyed having.

As Olynyk told the Spokesman-Review, he knew he needed to bulk up and be ready to battle it out in the post with the rest of the big men in the country. He kept on looking at the long-term goal, being as good as he could for the rest of his eligibility.

Rather than transfer, as the rumors said, Olynyk, his dad and Gonzaga coach Mark Few agreed to a redshirt season after two full years of playing, an uncommon occurrence in college sports. He could practice with the team, but he wouldn't see the court.

As the Seattle Times reported, the Gonzaga staff forcefully put some meat on Olynyk's bones, spending half the time turning the lanky forward into someone who could hold his own down low instead of getting pushed off the court. The other half of the time, they just winged it.

They'd concoct stuff with medicine balls. Says Olynyk, "We'd make up different drills. He'd put me through stuff that, I swear, no one has ever done before."

The result of all the effort was a reinvented Olynyk. He went from a 7-footer who settled for jump shots to someone willing to spend the time in the post to find the angle to the hoop. He went from an afterthought on the depth chart to the most important player on Gonzaga's team as they had the best year in school history.

During the first game of the season, the improvement was immediate. Olynyk went from barely getting minutes on the floor to barely getting minutes on the bench. He was a consensus first-team All-American, averaging 17.8 points and 7.3 rebounds a game. He shot 62.9 percent from the floor, good for third in the country. He led the country with a 36.16 player efficiency ranking. Although Gonzaga flamed out in the NCAA Tournament a bit early, Olynyk stamped his goofy looks on the eyes of everyone.

At the beginning of the season the question about Olynyk was how long his hair would get before it would be donated to Locks of Love. Now, the question is where he will end up in the draft. Most scouts pin him as a lock for the first round, and although he lacks the athleticism and explosiveness to really wow everyone, his fundamentals and footwork are as sound as they get for a big man.

With that redshirt year, Olynyk is the third player drafted in the first round from Gonzaga University since 2006, after Adam Morrison and Austin Daye. How his college success will translate to the NBA remains to be seen, but the creative use of the redshirt year only helped the process.