NBA Draft 2013: Nerlens Noel and the potential to be brilliant or bust

Nerlens Noel is incredibly raw, incredibly skinny, and incredibly talented. Do the Sixers have a future star on their hands, or a future "what were they thinking?" column? We'll have to wait and see.

Share All sharing options for: NBA Draft 2013: Nerlens Noel and the potential to be brilliant or bust

Nerlens Noel's draft evening was far from perfect. Not being picked first overall, stumbling to sixth, and then being traded to Philadelphia was a tumultuous entrance to the NBA, to say the least.

Noel didn't get his name etched in the history books as the first selection in an NBA Draft, as many might have expected. But that doesn't downplay the major investment the Sixers have made in him. With Andrew Bynum likely never to play a game for the franchise and Jrue Holiday shipped off to New Orleans in the trade for Noel, they're without any semblance of an All-Star. They've got a new GM, no coach, and a talented draft class headed by a flat-topped sensation. And although Noel's clearly talented, there's risk there.

With Nerlens Noel and No Jrue Holiday, the Sixers Will Tank in 2014 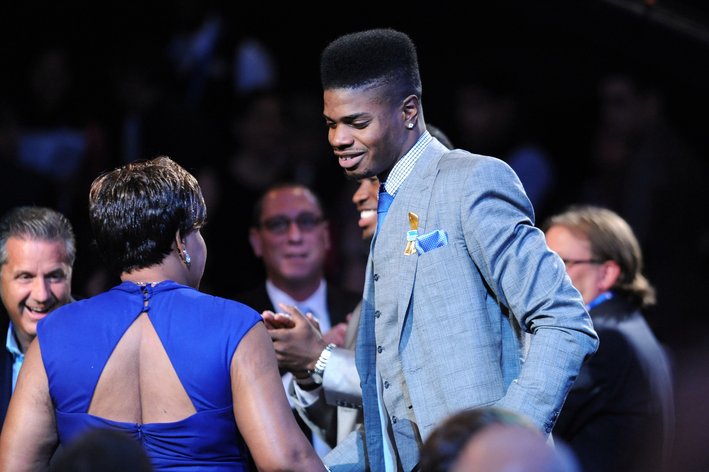 As Noel fell, one couldn't help but ponder whether NBA teams had latched onto the pre-draft questions about him, the questions that lept out the same way Noel sprang skyward over and over again during his brief Kentucky career to swat random college kids' shots.

He's too skinny, measuring just 206 pounds at the draft combine, spread across a 6'11 frame. (We're still unclear on whether the 6'11 includes the hair.) That's wafer-esque, leading to worries that he'll be incapable of banging against NBA centers, or even power forwards.

He hasn't shown his worth for any sustained period of time, playing just 24 games in college before tearing his ACL on a team that wouldn't even make the NCAA Tournament. And not only did that injury rob him of playing time in college and any opportunity to work out for scouts in the run-up to the draft, it could hamper his rookie season, as it isn't expected to be fully healed by November.

And his behavior in the run-up to the draft has led to skepticism. Agents didn't like that he wouldn't talk to them as he focused on his rehab, leading to a reputation that he's dependent on a "crew."

These should be nothing more than fleeting concerns. Muscle can be built. Kyrie Irving proved his boundless upside was worth a shot despite playing less than half the games at Duke that Noel played at Kentucky. Whether or not Noel's first season in the NBA is a great success is irrelevant to the greater story of whether he is a successful pick, so even if he missed the whole year entirely a la Blake Griffin, it wouldn't be an enormous worry. And so far as we can tell, the stories of Noel's rep were spread by spurned agents rather than legitimate indicators of bad character.

The key is that Noel's skillset features combinations that don't get put together very often in one player, near physical contradictions that make him unique. The question for the Sixers is whether those talents ever manifest, whether the exquisite basketball player that should materialize out of the physical gifts Noel has ever actually come together on an NBA court.

Noel's parents were Haitian immigrants who struck the genetic lotto. Working in blue-collar jobs just north of Boston -- Pete Thamel of the New York Times wrote that they were janitors at a local hospital, although Noel believed his father was a doctor -- they had three children capable of playing sports at an elite level. Nerlens' oldest brother, Jim, played safety at Boston College, and participated in rookie mini-camp with the Seattle Seahawks this spring. Another older brother, Rodman, will start at linebacker for NC State this upcoming year.

And the youngest drew attention from the time he began to play basketball. It doesn't take a trained scout to notice tall, long, and freakishly athletic, Noel has always been all of those things. He was the prized recruit the class of 2013, and after smoothing out some academic issues, he reclassified to the class of 2012 just months before he would need to make a college decision. And less than two weeks after another preternaturally gifted one-and-done defender in Anthony Davis won the national championship with John Calipari's Wildcats, Noel made his pledge.

As Jonathan Tjarks wrote in his scouting report of Noel, it was clear that Noel wouldn't have the same ride as Davis. They both swat things, sure -- Davis had 4.7 blocks per game, Noel 4.4 -- but Davis is stronger, and although he doesn't have much of an offensive game, its still miles more polished than Noel's. And the squad around Davis was championship-caliber with several other first-round picks besides him, while the players around Noel didn't live up to their recruiting billing.

It would have been easy to predict a Kentucky national championship after the 2012 title squad reloaded with a host of elite prospects. But it would have ultimately been wrong. Noel's year ended injured on the floor of Rupp Arena, and Kentucky's ended in a first-round NIT exit at the hands of sub-mid-major Robert Morris.

It would also be easy to predict that Noel will have himself a fine NBA career due to his physical assets, his springiness, his active hands, his bounding speed in a center's frame. But it won't necessarily be correct. Calling Noel raw is an insult to sashimi. We're talking about a player who never scored 20 points in a college game, and he just got selected No. 6 overall in the NBA Draft.

But the parts are there, and its on Noel and the Sixers' still unassembled coaching staff to tweak those parts into a functional product. Busting's a possibility, but so's brilliance.

• Sixers divebomb the standings to come out on top