Raised by a single mom working two jobs who sent her kid 2,000 miles away to play basketball at prep school, Anthony Bennett came from humble beginnings to become the No. 1 pick in the 2013 NBA Draft.

In a draft that seems to have more questions than answers, at least one consistent thing can be said: there may be two-straight Canadian players going No. 1 overall. Anthony Bennett (scouting report) will be the face of the new Canadian crop of players hitting the NBA ranks next year after being selected by the Cleveland Cavaliers, and Andrew Wiggins is coming next year

There are currently eight Canadians in the NBA. That number swelled after Thursday night by two, as Bennett and fellow Canadian Kelly Olynyk heard their names called Thursday. (A third, Myck Kabongo, went undrafted).

Bennett showed up on the UNLV Runnin' Rebels squad as its most heralded recruit since Larry Johnson, as both ESPN and Rivals ranked Bennett as the top power forward in the class of 2012 and No. 7 recruit overall. All of the hype paid off, too, as Bennett immediately established himself as the best player at UNLV while leading the team in points (16.1) and rebounds (8.1) per game. Bennett also led UNLV to the NCAA Tournament, though they were upset by Cal in the second round.

The power forward attended prep school in Nevada but still calls Brampton, Ontario, his home. His mother, Edith, worked two jobs in Canada to send her child to a school where his skills would get noticed, and Bennett plans to show that he appreciated that, as he told ESPN that he wants to pay back his mother for everything she has ever done. Along with the financial backing of his mother, Bennett may have also inherited his athletic skill from her, as Edith ran track and field as a teenager in Jamaica and played netball -- a derivative of sorts of basketball.

Bennett had a wealth of experience before hitting the college ranks, as he led Findlay Prep to a 32-1 record his senior year, helping the team to their third ESPN National High School Invitational Championship in four years. In his two seasons with Findlay Prep, the national powerhouse went 60-5. Bennett also played for both the U-16 and U-17 Canadian National teams at the FIBA World Championships, helping garner two consecutive bronze medals for his country. 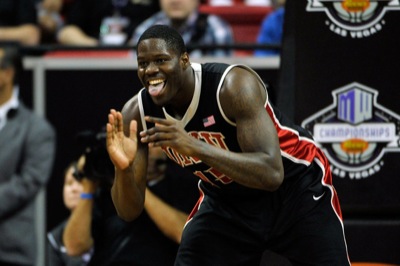 Check out more at Fear The Sword.

Following all of that success, Bennett should have the chance to pay his mother back almost immediately. In fact, if there is one knock against Bennett's game, it is something he can't necessarily anticipate -- injuries. Bennett has missed time in each of the past three seasons with lower-back stiffness and just recently had surgery to repair a torn left rotator cuff. His shoulder injury forced him to skip out on the NBA Draft combine as well as workouts with individual teams, though it obviously didn't stop the Cavaliers from taking him No. 1 overall.

Bennett told the Washington Post that had he known what the issue was, he could have gotten his shoulder fixed earlier.

"Could've had this fixed earlier in the season, but I didn't know what it was. I'm just happy I got it out the way. It's a long process, but I'm pretty sure I'm going to come back 100 percent."

Injuries aside, scouts drool at Bennett's potential, as some say he has the highest ceiling in the draft. Bennett can shoot the ball with the best of them, hitting 53 percent from the field in college despite standing a bit short for the power forward slot at the NBA. Bennett still held his own on the glass, however, gathering 21.8 percent of defensive rebounds.

With a 7'2 wingspan, Bennett has the length and athleticism to succeed as a combo forward while throwing fits for opposing coaches for years to come. Now, he is Cleveland's to enjoy.