2014 NBA mock draft: Because it's never too early to think about Andrew Wiggins

With the 2013 NBA Draft now in the books, it's time to look ahead to the landmark 2014 class. Here's our early ranking of the top prospects in that draft.

Share All sharing options for: 2014 NBA mock draft: Because it's never too early to think about Andrew Wiggins

Even before the 2013 draft happened, all anyone in the NBA could talk about was the 2014 NBA Draft. Because, ever since Andrew Wiggins reclassified himself, accelerating his timetable to the NBA, the hype has been building.

2003 is the gold standard for any draft in the modern era, but it's an impossibly high bar for any draft class to reach. That's what people expect out of next year's group, though, explaining the early intrigue.

We thought about projecting win/loss records in making a 2014 mock, but shelved that when we realized that meant predicting what Dwight Howard will do. At the same time, it hardly seems likely that Cleveland will win the lottery again so this mock draft is essentially just a way-too-early Top 30 list for 2014.

Since I don't watch a lot of high school basketball, I'm much more confident about where I'm putting the college players. Either way, the next year should be a really fun ride.

A prince is riding. I've heard the thunder of his hooves. Swift as the wind he rides. His enemies will cower before him and their wives will weep tears of blood. The Stallion Who Mounts The World.

Sorry, I've been watching too much Game of Thrones. If you're interested enough to be reading this, there's not much I can say about Wiggins that you don't already know. Let's just hope he can handle all the off-the-court hype.

Randle is the star of what many consider to be the best recruiting class of all-time. Here's a fascinating article from 2006 about his AAU team when he was just 11 years old. it will make you think about a lot of things.

Parker vs. Randle vs. Wiggins has been the big debate in AAU circles for years so these guys have known each other for a very long time. I'm calling a Welcome Party in 2021 right now.

Austin is a 7'1 player who can shoot threes and put the ball on the ground. Those are things he can actually do. If he comes back to school with 10-15 pounds of muscle this season, watch out.

Did Smart make the right decision? 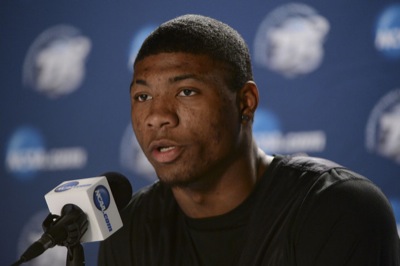 Smart would have been a top-3 pick in this year's draft. It will be hard for him to match that in 2014, but a 6'4, 225-pound point guard with his feel for the game won't fall far. The key for him will be improving his jumper.

One half of a pair of highly touted twins who will start in the Kentucky backcourt next season. I'll take a 6'5 PG over a 6'5 SG, though, so Andrew goes ahead of Aaron.

An 18-year-old who's already getting minutes for FC Barcelona. It sounds like the big questions are about his attitude and approach to the game so it sounds like Americans aren't the only ones who can have off-court issues!

The next big thing in the NBA is defensive-minded centers who can shoot threes. Payne is an extremely athletic 6'10, 240-pound big man who shot 38 percent from beyond the arc last year.

A 7'1, 280-pound center who knows how to play the game. His per-minute stats as a freshman were eye-popping and, when all is said and done, I think Karnowski will be the best player to come out of Gonzaga.

Cauley-Stein is a seven-foot, 245-pound center who played wide receiver in high school. You don't see guys with his size that move like he does, really ever. He's a better athlete than Nerlens Noel.

Exum, a 6'6 combo guard, impressed a lot of people at the Hoop Summit. He's being recruited by every school in the country, though, so he may end up being a 2015 guy.

After playing off Trey Burke and Tim Hardaway Jr. as a freshman, how will he handle being the main option next season? As of now, though, he has all the tools.

A 7-foot, 245-pound freshman center who looks like he can play basketball. If we're just picking random 7'0 teenagers out of a hat, I'd take Tarczewski over Steven Adams.

Ross hasn't shown much at Ohio State, but he's a 6'8, 225-pound wing with all the game in the world. With Deshaun Thomas gone, next season could be his chance to shine.

Warren is the last man standing from last season's loaded, but ultimately disappointing, NC State team. He's a natural scorer who can rack up points without dominating the ball.

I'm normally not a fan of 5'11 point guards, but I'll make an exception for Carson because he is incredibly fun to watch. Even if you aren't a college basketball fan, Arizona State will be worth checking out.

A transfer from Mississippi State who should thrive in Duke's offense next season. Hood is a 6'8 guard who can really shoot the basketball.

The younger brother of former New Mexico star Drew Gordon. Aaron is a freakish athlete, but he seems like he could use some seasoning from a skill-perspective.

John Calipari has never had a problem juggling egos at Kentucky, but there will be a lot of guys who want the ball next season. Will Aaron get enough touches to show what he can do?

A 6'9 point forward, but can he shoot and defend well enough to be an NBA starter? It will be interesting to see how he fares with Steve Alford rather than Ben Howland.

Saric and Anderson are remarkably similar players, in terms of their strengths and weaknesses. 6'9 guys with their feel for the game should be able to figure it out.

A raw 7-footer from Cameroon, Embiid will go in the first round whenever he declares. At the Hoop Summit, I was more impressed by his teammate Karl Towns Jr., a class of 2014 guy,. Towns can play in the NBA right now.

Jefferson is a big guy (6'9, 210) who has a lot of athletic ability and a ton of polish. His age will hurt his draft stock, though, since he will turn 23 next season.

I've been a big fan of Stokes for a while. The question is whether Tennessee's lack of point guard play and shooting will prevent him from showcasing his game around the basket.

If McAdoo develops a jumper, he'll be a lottery pick. Without one, he won't be effective as a 4 and he's not big enough to be a 5 in the NBA.

Adams can get buckets all over the court. The question is whether he can do anything else.

A prototype 3-and-D shooting guard. He would be higher, but he's got some outstanding legal issues that need to be resolved.

If Poythress plays at the 3, Kentucky could have a starting lineup with five first-round picks. That doesn't even count the three five-star freshmen on their bench! This is madness.

I'm not as high on Harris as most people. He's a solid athlete with a good feel for the game, but at 6'4 and 210 pounds, I'd like to see him used in more of a playmaker/primary scorer role first.

"Magic Mitch" is another guy I'm down on. He's a sophomore, but he's older than Tobias Harris. Think about that for a second.

• Sixers divebomb the standings to come out on top