Losing Kevin Garnett and Paul Pierce in one fell swoop is jarring for Celtics fans, but the assets Danny Ainge received in return will allow Boston to rebuild properly.

Share All sharing options for: Paul Pierce and Kevin Garnett get traded as the Celtics finally blow it up

So, the Celtics really are Rajon Rondo's team now. What kind of team they are now, and will be in the future, may take years to unravel. In a shocking series of events that escalated from head-spinning rumors to likely completion, the Celtics are poised to finally pull the trigger on the long-awaited implosion of the best team they've had since Larry Bird retired.

With Doc Rivers already in Los Angeles to coach the Clippers, Kevin Garnett and Paul Pierce are headed to Brooklyn along with Jason Terry, per Yahoo's Adrian Wojnarowski, who reported that Garnett had agreed to waive his no-trade clause. Pierce's contract won't be guaranteed until midnight on June 30, at which point the league enters a moratorium that lifts on July 10 when the deal can officially be completed.

The Nets will reportedly send Gerald Wallace, Kris Humphries, Reggie Evans and Keith Bogans (as part of a sign-and-trade) in the complex transaction. Other names discussed have included Kris Joseph, Toko Shengelia and Marshon Brooks, but this isn't about talent as much as assets and contracts. Humphries is in the last year of his deal that will pay him $12 million. Evans and Bogans are respected vets, but essentially throw-ins to make the cap math work. All of their contracts could be used in a potential sign-and-trade, provided the Cs can get under the luxury tax, or in separate deals.

Thank you, Paul and KG 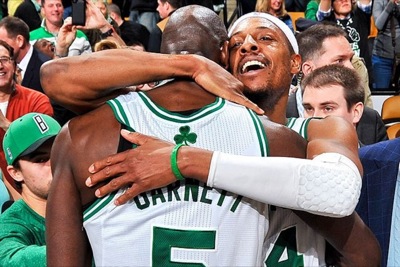 The 30-year-old Wallace will be harder to move. He has three years left on his deal at a little more than $30 million. He declined rapidly last season, averaging just 7.7 points and shooting under 40 percent from the floor, but he could benefit from playing in a more up-tempo offense than Brooklyn's slow-down pace.

Really what the Nets are sending, and what the Celtics covet, are draft picks in 2014, 2016 and 2018. Along with a pick from the Clippers as compensation for Rivers, the Cs will own additional unprotected first-round picks in 2015 (from the Clips), 2016 and 2018 (from the Nets) and a pick from Brooklyn in what many think will be a loaded 2014 draft. (Just to make it a little more complicated, the Hawks have the right to swap their first-rounder, so the Cs would get the worse of those two picks.)

That's how you rebuild in the modern era, with future picks and players on rookie contracts. While the Clippers and Nets look like strong teams now, no one ever went broke betting against those franchises.

It may take years to see this through, but overnight the Cs have been transformed from a capped-out collection of aging veterans into a young team with assets and flexibility. In addition to the picks, they also have Avery Bradley, Jared Sullinger and Fab Melo on rookie deals to go along with first-rounder Kelly Olynyk.

They join Rondo and Jeff Green as the team's new core. Courtney Lee and Brandon Bass are also still in place, for now, at least. That team is younger, more athletic and undoubtedly worse than the one that restored the Celtics to the height of the league's pecking order.

This is the long-awaited blow-it-up scenario that was ultimately necessary, but it will be jarring to see Pierce and Garnett suiting up for new Nets coach Jason Kidd in Brooklyn. Presumed assistant Lawrence Frank's first task should be installing some variation of KG's 5-5-5 plan that helped maintain him the last few years.

Garnett was an All-Star in five of his six seasons with the Celtics and helped deliver the first championship in 22 years. The full measure of his impact in Boston can't be conveyed in a few hundred words. In short, he changed everything, including the careers of Pierce, Rivers, Rondo and Ray Allen.

Pierce is an all-time Celtic, an iconic player who will have his number retired as soon as he stops playing. It shouldn't have come to this, but both sides knew the end was coming. He can still play at a high level, but after Rondo went down with an ACL injury, he couldn't continue carrying the offensive load and directing the offense.

This is a huge gamble for Nets GM Billy King.

They will join Deron Williams, Joe Johnson and Brook Lopez in a starting lineup that will cost more than $80 million. KG will be allowed to return to his beloved four position next to the seven-foot Lopez. If Pierce and KG have anything left, the Nets will be one of the better teams in an unpredictable Eastern Conference. This is a huge gamble for Nets GM Billy King, and if he's wrong, he'll have a massive tax bill on his hands with limited avenues to improve the team in the future.

Ainge rode Pierce and Garnett as long as he could, but after a 41-40 season and a dreadful first-round loss to the Knicks that saw them set new franchise records for offensive futility, it was time to go in an entirely new direction. Next year may be ugly, but the future has finally arrived in Boston. With picks and cap space on the horizon, the Cs are poised to be players in both the draft and the trade market for years to come.

It's an inglorious end to a glorious era in Boston, but it was necessary.