Heat vs. Pacers: Miami rediscovers its dominance in Game 7 blowout

Oh, now we remember. This is why Miami was the odds-on favorite to win the title. But the Pacers offered a valiant challenge and gave us a series we won't soon forget.

Share All sharing options for: Heat vs. Pacers: Miami rediscovers its dominance in Game 7 blowout

Maybe the Heat just really like trolling us. How else do you explain such a thorough beatdown in Game 7 like the one they handed the Pacers. Sure, experience and home court count in these kind of situations, but that alone doesn't come close to explaining the 23-point spread on a game that was essentially over by halftime and featured more of the same sputtering Miami offense in the opening quarter.

Dwyane Wade looked like Dwyane Wade again (for the most part) and Ray Allen reminded us why he's one of the game's all-time great shooters. Wade went for 21 points and nine rebounds, and Allen knocked down a trio of threes while the Heat were making their decisive run to finally give LeBron James some much needed breathing room.

Not that the MVP needed much. He turned in a peerless 32-points-on-17-shots performance while completely shutting down Paul George, and with all those elements in play, there was quite literally nothing the Pacers could do about it. That's before we get to the 21 turnovers and 15 offensive rebounds Indiana surrendered.

Without LeBron, it doesn't get to this point. Does anyone do casual brilliance better than James?

Wade's renaissance was the story of Game 7, but don't get it twisted. Without LeBron, Miami is already on summer vacation. Does anyone do casual brilliance better than James?

When the Heat play like this, they are downright frightening. By frightening, we mean on the defensive end, where they were all up in Indiana's sets and passing lanes disrupting everything the Pacers tried to do offensively. This was the kind of effort we expected from the opening game, and while it's to Indiana's credit that it took this long to happen, it's also still a bit worrisome that it took seven games for Miami to reach its fevered peak.

Why small markets are winning 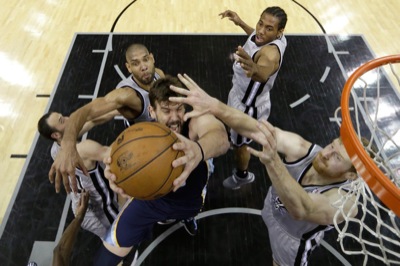 It's about smart management, not the new CBA, writes Paul Flannery.

They will have to be better -- much better -- come Thursday when the Finals begin against the Spurs who are deeper and present a more challenging offensive puzzle for the Heat to solve. That series will be nothing like this one. Any overreactions or carryover to what we just witnessed should be taken with a huge dose of caution.

Momentum is fleeting in the NBA, if it even exists at all. There's no better proof of that then the team that is still standing on top of the Eastern Conference. For three years, teams have lined up to take their shots, and the Heat have simply been better than everyone else. They were too much for the Bulls and Celtics, and now you can add the Pacers to that list. They went down valiantly, but went down all the same.

There will be better days ahead for Indiana, who were the breakout stars of the postseason. George is just 23 years old and still in his basketball infancy. He made tremendous strides this season as an offensive player and established himself as one of the premier perimeter defenders in the league. He's not in LeBron's class, but if that's the standard, then everyone else falls short.

Roy Hibbert also made good on the huge investment the Pacers made in him last summer. He struggled through an inconsistent regular season, but in the playoffs, he emerged as the next great big man. Those two, along with coach Frank Vogel, are the nucleus for the NBA's next up-and-coming team, but they still need more help.

The front office will have two important decisions to make this summer. First, what will they do with Danny Granger, who missed most of the year with a knee injury? George has supplanted him as the go-to guy on the wing and is eligible for what should be a massive extension. It's hard to see a future for Granger and the $14 million he has left on his contract in Indiana.

Second, and perhaps more importantly, is the tricky question of David West. The team's conscience and spiritual leader, West can still play, but he's also 32 years old and it's fair to ask how much a team like the Pacers can invest in him. Two years would be ideal, but if West is looking for a longer commitment, they will have to think long and hard about the decision, especially considering their other needs off the bench.

At worst, the Pacers have joined the select group of very good teams, and that's no small leap for a team that only two years ago snuck into the playoffs with a 37-45 record. It's also no guarantee of success. The Bulls should be better next year assuming Derrick Rose gets back to being Derrick Rose. And the Heat. Well, the Heat aren't done yet.

How much longer can it last? On nights like the one, we just saw it seems like it is entirely up to them. They weren't even totally clicking and they still reached a level no one else in the sport can hope to touch. For at least one more series the champs stayed the champs and they did it by returning to a form we foolishly thought was beyond them.

• Jason Kidd retires as one of the best point guards ever

• Longform: How Paul George got to this point