Feast your eyes on what the San Antonio Spurs' 15 years of dominance have wrought upon the NBA.

As the San Antonio Spurs won the West again last week, I considered how the franchise's success has spread throughout the league. You can't swing Udonis Haslem's elbow without hitting a member of the Spursian fraternity. Given the pervasiveness of acolytes of Gregg Popovich and R.C. Buford among the NBA coaching and front office ranks, I decided to put together a chart documenting all of it (I could remember). Word up to Chartgirl and Google. 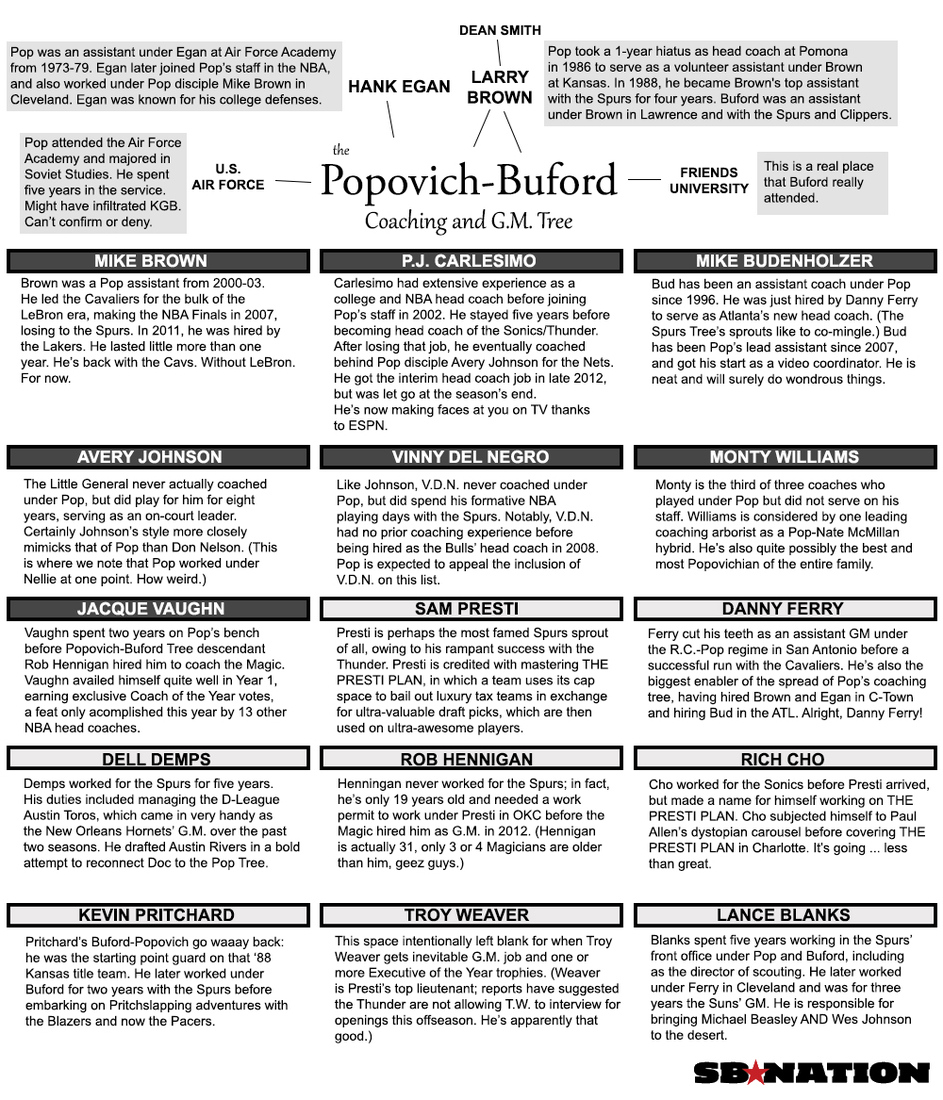 * As always, a reminder that Dean Smith is the Zeus of Basketball.

* The marriage of disciples who played in the NBA and those who did not is so impressive. Even among the major Spursian G.M. products, Ferry, Demps and Pritchard were NBA players, while Presti was not. It's worth noting that neither Pop nor Buford made it to the NBA as players. But Pop has consistently included former players on his staff. (Ime Udoka is the next Jacque Vaughn.)

* There's really not a ton of internal hiring here, with the big exception of Danny Ferry, who will have given Mike Brown and Mike Budenholzer their first NBA head-coaching jobs and brought along Lance Blanks in Cleveland. Rob Hennigan is but a disciple of a Spursian disciple, but he smartly hired Vaughn, a Pop coach.

* I wanted to attach Doc Rivers to this whole familia, but he only spent a couple of years with the Spurs at the tail end of his career and hasn't really reattached with Pop in any way. I'd be interested in getting his take on where his formative coaching experiences stem from.

* That 1988 Kansas Jayhawks team is something else in terms of NBA fate-setting. HOW DID DANNY MANNING NEVER PLAY OR COACH FOR THE SPURS? Manning did work as an assistant under Bill Self (who at one point worked under ... Larry Brown) at Kansas before taking over Tulsa a year ago. So there's time yet for Manning to join the Spurs coaching/front office familia.

• Flannery: The Heat as we knew them | Ziller: Dynasties are supposed to be hard

• David West: "I can't see myself going anywhere else"