NBA Finals 2013: Reviewing Spurs vs. Heat games since The Decision

The Spurs and Heat have played five times since LeBron James took his talents to South Beach. Here's what happened in each of those games.

Share All sharing options for: NBA Finals 2013: Reviewing Spurs vs. Heat games since The Decision

The Miami Heat and San Antonio Spurs are set to square off in the NBA Finals on Thursday, and Game 1 will mark just the sixth time the two teams have played since "The Decision" in the summer of 2010.

The Heat have won four of the five meetings in their Big Three era, although several of the games have included notable absences. Let's take a look back at the five games.

LeBron James had 26 points, eight rebounds and seven assists in his first game against the Spurs as a member of the Heat, but San Antonio used a balanced scoring effort to dominate Miami. Manu Ginobili led eight Spurs in double figures with 20 points as San Antonio shot 56.1 percent from the field and 17-of-28 from three-point range. The Spurs led by 24 points after one quarter and never let their lead dip below double-digits.

Just 10 days after losing by 30 to the Spurs, the Heat delivered a 30-point beatdown of their own back on their home court. Chris Bosh had 30 points and 12 rebounds, while Dwyane Wade had 29 points and James added 21. Miami shot 53.8 percent from the field and won the rebounding battle, 47-33. Tony Parker had 18 points to lead San Antonio. 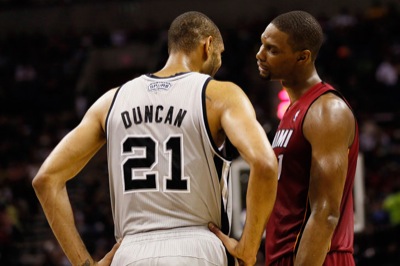 In the only meeting of the lockout-shortened 2011-12 campaign, the Heat smoked the Spurs again in Miami. Bosh had his second straight 30-point game against San Antonio, adding eight rebounds, five assists and four steals. James had 33 points and Mike Miller had 18 points on 6-of-6 from three to help step up in the absence of Wade. The Heat shot 58.2 percent overall and 16-of-26 from three-point land. Danny Green had 20 points off the bench for San Antonio. Ginobili did not play due to a hand injury.

In a controversial decision by Spurs coach Gregg Popovich that resulted in a hefty fine, Parker, Ginobili, Green and Tim Duncan all sat out of a narrow Heat victory in Miami. A rag-tag Spurs lineup nearly beat a Heat team at full strength in a thrilling TNT game, with Ray Allen's late three helping Miami pull off a late rally. Allen had 20 points off the bench, while James had 23 points, nine rebounds and seven assists. Gary Neal had 20 points off the bench to lead San Antonio, while Tiago Splitter added 18 points and nine rebounds.

This time, it would be the Heat playing short-handed, with James and Wade sitting out to nurse minor injuries. But Bosh stepped up big, scoring 23 points and hitting a three just before the buzzer to give Miami the victory. Duncan and Kawhi Leonard both had double-doubles, and the Spurs held a three-point lead with just over a minute to play before going scoreless the rest of the way. San Antonio dominated the rebounding and points in the paint battles, but Miami made 12 three-pointers. Ginobili did not play due to a hamstring injury.

James was naturally good in the four games he played, but Bosh's major contributions were just as important. Bosh reached 30 points twice and stepped up in the most recent game in the absence of James and Wade. This bodes well for the Heat after watching Bosh struggle mightily for a good portion of the Pacers series.

For the Spurs, having Ginobili healthy is a huge plus, as he has not played in the last three meetings. Nobody has consistently stood out for San Antonio in these games, although Parker should have an advantage over Mario Chalmers. Duncan and Splitter could pose some problems in the paint, although that has not proven to be a big issue in recent matchups.

• Flannery: The Heat as we knew them | Ziller: Dynasties are supposed to be hard

• David West: "I can't see myself going anywhere else"