MIAMI -- Tim Duncan was trying to get position for the rebound he hoped was coming. Manu Ginobli was racing around the court trying to provide an outlet. LeBron James was thinking that this was the longest 24 seconds of his life. All the while Tony Parker was doing his best Curly Neal while the fate of Game 1 of the NBA Finals hung in the balance.

"It felt good when it left my hand," Parker said, but he was the only one who was feeling good about things at that point.

"Shhhhhi" James started to say before catching himself somewhere between the I and the T. "You're going to make me go back to that play? Tony did everything wrong and did everything right in the same possession."

Or, as Gregg Popovich so succinctly put it, "We were very fortunate."

No matter your perspective, Parker's last second nonononononoYES shot was the play of an exquisite basketball game that saw the Spurs take a 92-88 victory in Game 1 that may set the stage for an epic Finals. It also served as a fitting denouement to the point guard's peerless performance against the Heat's pressure defense.

Parker was brilliant down the stretch when he added a gorgeous spin-o-rama on poor Norris Cole and a tough pull-up jumper, but he was just as sublime in the other 40 minutes that he played without registering a single turnover. The 21 points and 6 assists were great, but again, Tony Parker did not have a turnover in 40 minutes against the Heat.

Indeed, the Spurs had only four turnovers as a team. While the conventional wisdom is that the Spurs never make mistakes, they actually ranked No. 19 in the league in turnover rate. Four turnovers is practically unfathomable against that kind of defense.

"I have no clue," Pop deadpanned. "Sometimes you have turnovers, sometimes you don't. We don't do no-turnover drills."

No, but when Parker wasn't being a magician he was a model of control and restraint and that was the key to the Spurs victory. When Heat coach Erik Spoelstra put LeBron on Parker in the final three minutes, Parker continued to carefully probe looking for mismatches. He is a player in complete control of his game and the surroundings.

"Whoever they put on me, I just have to keep playing the same way and be patient," Parker said. "I think for me it's the big key in this series is be patient."

Patience was the key to everything the Spurs did in Game 1. Whether it was withstanding every Heat run with big shots of their own or sticking to their defensive gameplan against James, the Spurs kept being Spursian. That meant staying disciplined on the boards and in their coverages, as well as riding out the momentum swings that seemed to be lurking just around the corner but never truly happened.

"I think we played an OK game," Manu Ginobli said. "We got lucky today."

Honestly, they did. Someone was going to have to get lucky to come out of here with a win. The game was that good. If you wanted to show someone what the NBA is like when its played at its highest level, you'd put on this tape and just press play and sit back and enjoy it. Good fortune was always going to play a large role in the ultimate outcome.

In the grand scheme of the series, this was a momentous win for the Spurs, who staked an early claim to homecourt advantage, but this was not a disastrous loss for the Heat by any stretch. They turned it over too many times in the fourth quarter and looked, as Dwayne Wade said, like a team coming off a seven-game series. That is to say, tired and fatigued.

In the end we're left with a simple plea: six more of these, please.

Wade and James were both absent in the first three minutes of the fourth quarter when the Heat second team battled the Spurs backups to a draw. They needed the rest, but it felt like an opportunity missed to put some distance on the scoreboard while Parker and Duncan rested.

Had they made a few more plays, or if Chris Bosh had knocked down a wide-open three, we'd be having an entirely different conversation right now. "Come on, this is the Finals," Spoelstra said. "This is elite basketball right now."

In the end we're left with a simple plea: six more of these, please.

LeBron James had a triple double and some will say he didn't do enough, especially in the fourth quarter when the Heat were outscored 23-16. The LeBron takeover finally came late in the game but it wasn't enough and he'll have to live with the consequences over the next two days before Game 2. That's his curse and he's evolved enough at this point to brush off the questions that came with it. 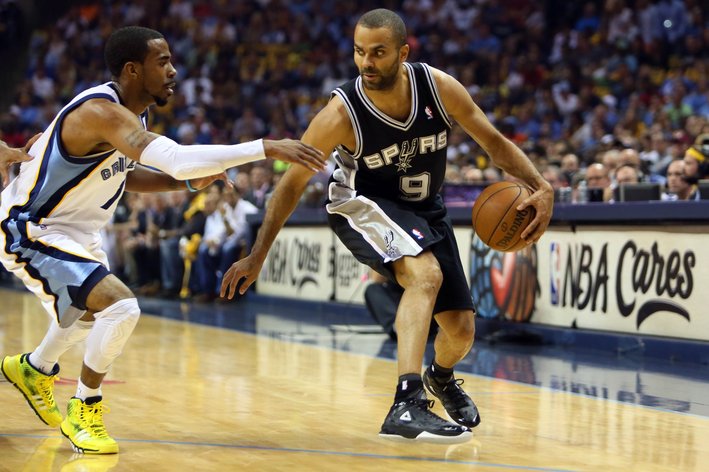 Mike Prada digs in on Tony Parker, the Spurs' wizard who does so many different things to keep defenses off-balance.

Credit Kawhi Leonard, the second-year player who seemed to have been created for the Spurs directly from the womb, with playing solid defense. Also credit Popovich with coming up a gameplan that helped turn LeBron into a playmaker first and a scorer second. LeBron, of course, is the ultimate playmaker, which creates something of a philosophical problem.

"It's difficult," Popovich acknowledged. "One second-guesses oneself in the meat of these games, whether you stick with a certain strategy or change it."

Their plan involved shrinking the floor and having help stationed at the elbow whenever James got the ball. It worked, as well as allowing 18 points and 10 assists can work. LeBron said that he'll continue to trust his teammates. If we know anything about James at this point it's that he's hardwired to always make the correct basketball play, haters be damned.

One can't help think that he'll need more help if the Heat are going to salvage a split. Outside of Ray Allen, who seems to have rediscovered his stroke, there wasn't much support.

Dwyane Wade had his moments, but he was once again not quite up to the D-Wade standard that we've known over the years. Mario Chalmers missed some open shots. Chris Bosh was ... well, Bosh was practically non-existent and that's a major problem for the Heat. If there was tension in the thick South Florida air after a game that got away, James hardly acted like he was bothered.

"It's the first team to four," James reminded everyone and again, the line between winning and losing was as thin as the space between the ball and Parker's hand as the shot clock hit zero.

"He did just about everything in the book he had," Duncan said. "He fell to the ground, pump-faked, stepped through and still got it off the ground. It was just amazing."

• GIF: Tony Parker barely got this shot off

• George Karl's gone, and the Nuggets are in chaos