The Heat's offense struggled to score in the fourth quarter as the Spurs contained LeBron James' dribble penetration. Miami needs James to make better decisions when driving to the rim, while also being better prepared as a team if he is forced to facilitate.

Share All sharing options for: NBA Playoffs 2013: The Heat need more out of LeBron's dribble penetration

The Miami Heat were unable to close out the San Antonio Spurs in Game 1 of the NBA Finals. Allowing just 16 points on 5-of-18 shooting in the fourth quarter, the Spurs contained LeBron James when he drove to the rim while his supporting cast was unable to deliver when he put the ball in their hands.

Going forward, James must be more aggressive off the dribble, specifically when the Heat create separation from Kawhi Leonard out of the pick-and-roll. If the Spurs continue to cut off James' driving lanes, Miami needs to put its players in position to score when San Antonio commits extra defenders to stop him, and James needs to make the right decisions.

Leonard did a great job of covering ground on defense and staying with James when he would drive to the rim throughout the game. His defensive speed was critical in the fourth quarter. Here, James sets a screen for Mario Chalmers. Chalmers drifts out to the corner in order to pull Leonard away from James.

Chalmers passes back to James, who now has separation from Leonard. Leonard does a great job of recovering and defending James' dribble penetration. James is forced to pass out to Dwyane Wade after being surrounded by three defenders. Wade drives to the rim and forces the shot but misses as the Spurs are already in position to defend.

The Spurs' team defense, combined with Leonard's individual defensive work, forced the ball out of James' hands. The Heat need to be prepared to make plays when James drives and kicks. James also has to be more willing to force the Spurs' frontcourt to make a play at the rim. James made six of his eight field goals around the rim: 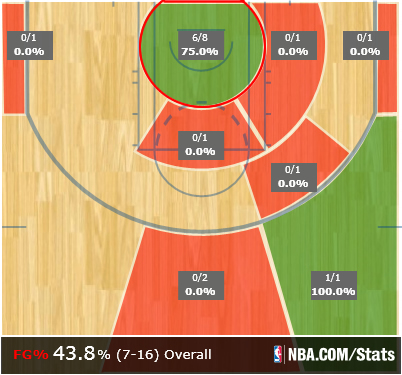 Here, James takes a high-screen from Chris Bosh and has only Tim Duncan to beat off the dribble.

Instead of driving to the rim, he allows Duncan to force him out of the paint. James then passes out to Wade in the corner to reset the offense.

This puts Miami's offense at a disadvantage. There are only 11 seconds left on the shot clock and Wade must not only back down his defender, but also the two defenders behind him who are in position to help.

The Spurs trap Wade when he makes his move into the paint. This forces him to pass out to James.

There are now seven seconds left on the shot clock and James tries to pass the ball back in to Wade in the low-post. Leonard interrupts the pass, forcing the turnover which led to Tony Parker's spinning layup on the other end and a three-point lead for the Spurs in the fourth.

James should not have passed the ball back to Wade. James should have taken the shot in this situation. When Leonard recovered he positioned himself to stop James from driving to the rim, giving up the open shot instead.

James having his dribble penetration contained by Duncan, then deciding to pass the ball back in to Wade instead of taking the open jumper, created a poor offensive possession for Miami.

The Spurs made a concentrated effort to cut off James' dribble penetration. The Heat have the personnel to counter the Spurs, though. Directing Chris Bosh to work around the elbows instead of beyond the arc is an adjustment the Heat should make in Game 2.

Here's an example of what Miami should strive for. Bosh sets a screen for James. He does not drift outside of the three-point line, but instead stays near the elbow. The Spurs trap James to stop his dribble penetration, but Bosh is left wide open.

Leonard and Danny Green are too far out to recover and Bosh scores with ease from mid-range.

During Game 1 Bosh made three of his five field goals from that area but missed all four of his three-point attempts: 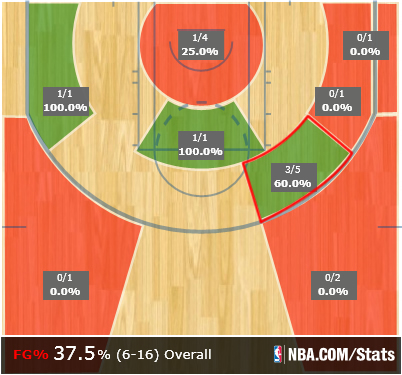 In the fourth quarter, the decision to utilize Bosh as a three-point shooter hurt Miami's comeback effort.

Ray Allen sets a screen for James. Duncan slides in front of James, who decides to pass out to Bosh instead of trying to drive past Duncan. Despite the space the Spurs give him, Bosh is unable to hit from beyond the arc.

If James is going to pass out of the pick-and-roll instead of driving to the rim, the Heat should put Bosh at the elbow where he was effective in Game 1. Down four with 1:06 left in the game it was unnecessary for Miami to shoot a three.

James was hesitant to force his way to the rim when the Spurs put a body in front of him. The Spurs deserve credit for doing a good job of forcing the ball out of James' hands, but the Heat need James to be more aggressive when he drives to the rim, in particular when Duncan is forced to switch onto him.

Miami can't solely rely on James scoring when he drives, though, so Erik Spoelstra must have his players in position to be effective when James is forced to facilitate.

• How the Spurs beat the traps

• Rodman: LeBron would have been average in 80s&90s