There's no downside to the Cavaliers' deal for Andrew Bynum

Cleveland picked up that rarest of things -- a young All-Star center -- without much of a commitment. It's a brilliant move.

Share All sharing options for: There's no downside to the Cavaliers' deal for Andrew Bynum

Most free agent moves in the NBA have some obvious downside, a risk of a contract going upside-down or at the very least some opportunity cost. You'd think a deal for a center coming off of a season in which he never suited up due to a knee injury would be one of those contracts. You're paying someone for which there is no guarantee he will play much and a real chance he won't play at all.

It's not okay if Bynum doesn't play in 2013-14. But it's okay that risk exists, because the Cavaliers are giving up basically nothing. The deal is worth $24 million over two years, but only $6 million in Year 1 is guaranteed. The other $6 million in 2013-14 is based on performance benchmarks, and the entire second year is a team option. If Bynum struggles to get healthy enough to get on the court, the cost is $6 million. Oh well. If Bynum does play, history tells us he'll play really well. If healthy, he's worth the $12 million ... easily. If not healthy, that $6 million lost isn't going to devastate the Cavaliers' bottom line.

Here's the sneaky thing about the deal: if Bynum can't play much, well or at all, the Cavaliers figure to be pretty bad again, which means adding another high lottery pick to the mix. Cleveland GM Chris Grant's current struggle is to continue building the team's long-term future without frustrating Kyrie Irving, who probably wants to start winning now. Grant has potentially five first-round picks in the next two years, including -- depending on whether the Kings crawl out of the deep cellar -- a likely four in 2015. Plus he has Irving, Tristan Thompson, Dion Waiters, Tyler Zeller and now Anthony Bennett and Sergey Karasev all on rookie deals. This is not a team that needs to win now. It's a team that needs to look like it's trying to win now. 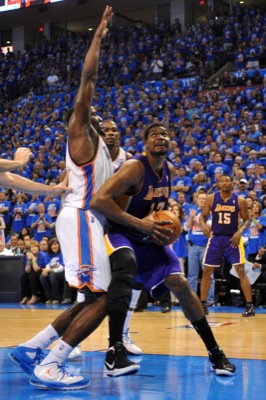 Fear the Sword on what Cavaliers fans can expect from Bynum

In that sense, picking up a "winner" like Jarrett Jack fits the purpose: he's a veteran leader who meshed well with a young core in Golden State, but he's also a back-up point guard who isn't going to make a huge impact on the Cavaliers' win-loss record. And it's why the Bynum deal makes sense: Grant wins either way. If Bynum taps out, the Cavaliers' pick in the awesome 2014 draft will be top-10, maybe top-5. If Bynum excels, the team will have itself one of the best centers in the East through 2015. A healthy Bynum and Irving make a formidable duo. Add in all of those other young bucks and Jack, plus an experienced, successful coach in Mike Brown, and you have a playoff team in the East.

There's one way Grant can lose: if Bynum doesn't pan out and the fans or media turns on the front office for rolling the dice instead of getting a safer big man. But that's not a situation exclusive to signing Bynum: if the Cavs didn't make this deal, the fans and media could have potentially been all over Grant for slow-walking the building process and wasting perfectly good Irving years. (There's also the small fact that once Dwight Howard made his mind up, there weren't a ton of great big men moving around. Signing Tiago Splitter for a guaranteed $36 million is no safer than the Bynum deal. Nikola Pekovic is the only other big man who made sense for Cleveland in free agency, but his restricted status complicated things, and it turns out Minnesota is going to pay him gobs of money in the end.)

That said, we're talking about Andrew Bynum. I'd quarantine him for a while, just to be safe.