Kevin Garnett leaves Boston as mysteriously as when he arrived

The private, almost reclusive KG has skipped out of Boston without revealing anything more than his game did.

Share All sharing options for: Kevin Garnett leaves Boston as mysteriously as when he arrived

In the hectic chaos of a playoff series in New York, Kevin Garnett revealed his true self. While the rest of the media horde descended upon Shaquille O’Neal for their daily injury update after a morning shootaround, Garnett slipped out the back door.

Dressed in black jeans, sunglasses and a dark hoodie pulled tight over his face, one of the most famous and recognizable people in the league managed to evade a dozen reporters and a handful of camera crews by creeping ninja-like against the back wall and then finding a secret exit to the outside world. My eyes met his glare for a second and I played the willing accomplice to his escape plan by not calling attention to his presence. You had to admire the effort.

Garnett arrived in Boston as a mystery and now leaves out the side door to Brooklyn just as cryptically. He rarely sat for extended interviews and his preferred method of communication was in wild unhinged postgame spots and bizarre extended metaphors that had only a tangential relationship to the subject at hand.

He came to restore the Celtics to their former glory, as well as his own reputation that had taken a sad detour in his last few seasons in Minnesota. Both worked out magnificently in his first season, as he led the C’s to a 66-16 record and a championship while finally winning the Defensive Player of the Year Award and finishing third in the MVP voting.

Garnett was a Celtic in the true Bill Russell sense of the word. Stats and accolades had no context for him next to the wins and losses, and he had finally found the perfect place to the play the game his way.

"Everyone should have a chance to coach a Kevin Garnett." -Doc Rivers

Freed from the responsibility of being the focal point on both offense and defense, KG dutifully set (borderline illegal) screens, made the extra pass and ran the hell out of the backline of defense. He happily ceded the public spotlight to Paul Pierce and Ray Allen and was more concerned with maintaining a strict code in practice and the locker room away from the prying eyes of the press.

"Everyone should have a chance to coach a Kevin Garnett," Doc Rivers was fond of saying, and the bond between the two of them was genuine. "Doc never lied to me," Garnett told WEEI late in the 2012 season in an extended radio interview that stands as his most revealing in Boston.

He could be merciless with those who didn’t share his vision, and the tales of him eviscerating callow youngsters who failed to take heed are legendary. One story has it that KG spent the better part of a practice dominating a player who had resisted his invitation to get in extra work, screaming, "YOU FEEL ME NOW!!!" after throwing down a vicious dunk.

There were no shades of gray with KG. You were in or you were out and if you were in you were in all the way. Everyone from Rajon Rondo to Brian Scalabrine swears by Garnett and it’s not uncommon to hear stories of players like Kendrick Perkins and Tony Allen calling on him with questions about how to handle situations with their new teams.

It wasn’t until his fifth season in Boston that he finally began to reveal some of his innermost thoughts to those outside his tight inner circle. Perhaps it was the lockout, or the sense throughout the Garden that the Celtics’ run was coming to an end, but in 2012 Garnett decided to bring us along on the tortured journey through his psyche.

"I have no life at this point," he said after another brilliant performance. In a playoff run that was as inspiring as it was surprising, he railed against his enemies, ranging from Hawks owner Michael Gearon and his anonymous doubters of the press.

"I hear you all calling me old," Garnett said, and he was off on a lengthy diatribe that included this underrated gem that best sums up his approach to the game: 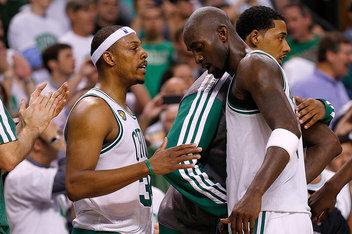 Paul Flannery looks back at the era of Paul Pierce and Kevin Garnett, and how it finally ended.

His play carried the Celtics all the way to Game 7 of the conference finals, battling opponents and the demons in his head that said he couldn’t do it anymore. The numbers piled up, but again KG wasn’t interested in them. Still, one set of figures registered more emphatically than points and rebounds. When he was on the court, the Celtics were exceptionally good and when he was on the bench they were horrifically bad.

That was the true essence of Garnett’s impact on the Celtics. As long as he was around they had a chance. He was the one who changed the culture, and now that he’s gone the Celtics will enter into a necessary new phase that will ultimately suffer from his absence.

This isn’t the end, but it is in sight. Garnett will get another chance at postseason glory if all goes well in Brooklyn. That is, if he and Pierce can stay healthy and productive playing alongside Deron Williams, Joe Johnson and Brook Lopez.

As he leaves Boston, he closes the door silently on one of the most productive and satisfying stages of his career. In time, the true measure of his tenure in Boston can be broken down and dissected. There has already been loose talk about whether his No. 5 should be retired someday. There’s a very good case to be made that it should happen when you consider he was a five-time All-Star and the best player on a championship team.

But we may never know the full Garnett story. The practice sessions where he worked so hard Rivers had to forcibly order him off the court, the bull sessions in the training room and the back of the plane where he forged relationships have remained almost zealously guarded secrets.

I spent the better part of five years writing about KG, beginning with a lengthy profile in Boston magazine after the 2008 championship season that he, of course, wouldn’t talk to me about. Some day in the future, I hope to be around when he finally decides to let it all out. I often doubt that will ever happen. Maybe it would be better that way.

The mystery was always the most intriguing part of KG’s personality, and there were enough hints that there was something deeper within him pushing him to a place that was better left to him alone. What he chose to share was there for everyone to see on the court and that was enough.

• A night at the "Penis Monologues"

• The difference between Jeff Teague and Brandon Jennings