The Lakers have moved on from Metta World Peace, electing to save money instead of allowing him to play out the final year of his contract with the team. Here's a look back at what made his time with the Lakers so memorable.

Share All sharing options for: Metta World Peace's best memories with the Lakers

A magnificent era in Los Angeles Lakers basketball history came to an end Thursday. The Lakers amnestied Ron Artest Metta World Peace, cutting ties with the eccentric small forward. He spent four years with the team, won one championship and made plenty of memories.

Here's a look back at a few of the most memorable moments from World Peace's time with the Lakers.

5. It began in the shower

Metta World Peace's strange journey with the Lakers began in the shower with Kobe Bryant. No, really.

The Lakers had just taken a 39-point lashing from the Boston Celtics in the NBA Finals, losing the series 4-2. Bryant was washing off the Game 6 loss and was approached by World Peace, who somehow wound up with locker room access to the Lakers.

"I want to come help you," Artest told Bryant. "If I can, I'm going to find a way to come to LA and give you the help you need to win a title."

Showergate was after the 2008 NBA Finals. World Peace remained with the Houston Rockets through the 2008-2009 season and was eliminated by Bryant and the Lakers in the playoffs that year. Los Angeles went on to win the 2009 title without World Peace's help, but he finally got his chance to join the Lakers in the summer of 2009.

World Peace has never been shy about his roots in Queensbridge, New York. After the Lakers clutched a series victory over the Denver Nuggets with a Game 7 win during the 2011 NBA Playoffs, phenomenally jacketed legend Craig Sager caught up with World Peace for a post-game interview.

The spot ended in spectacular fashion with World Peace shouting out to Queensbridge twice.

World Peace suffered a partially torn meniscus toward the end of the Lakers injury-riddled 2012-2013 campaign. He returned to the team just 12 days after the surgery. His secret? 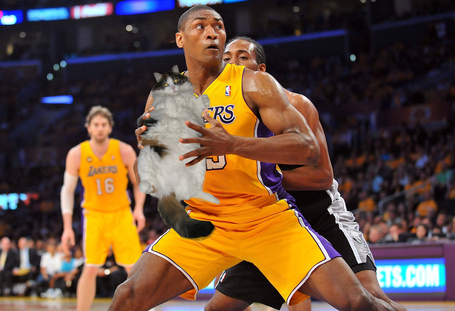 The 2010 NBA Finals were filled with memorable quotes and moments from World Peace. The quick, highlight version of his post-championship antics is as follows:

As he walks up to the podium, from a distance, "I got Wheaties!"

"I'm blessed, and I totally forgot the question you asked."

Of course, this could all have been very different had he not nailed a big shot in the final two minutes of Game 7 against the Boston Celtics.

The full post-championship interview can be watched here.

1. Kobe passed him the ball

Ultimately Metta World Peace did fulfill the promise he made Kobe Bryant in Boston back in 2008. In the 2010 NBA Finals, he nailed a clutch three with 1:01 left in the fourth quarter in Game 7. He put the Lakers up six, and closed the door on Boston's comeback effort.

With the end of an era comes a time for reflection. Metta World Peace left behind plenty of things to reflect upon to Lakers fans.

• A night at the "Penis Monologues"

• The difference between Jeff Teague and Brandon Jennings