The 6'3 guard has accomplished plenty on the basketball court, but he's still looking for a guaranteed contract in the NBA.

Andrew Goudelock has never been given a test he hasn't aced on a basketball court. The 24-year-old guard is reinforcing the idea again at Las Vegas Summer League, scorching opposing defenses as a member of the Chicago Bulls. Through three games, Goudelock is Las Vegas' leading scorer. He's averaging 22.7 points per game on a 56.1 percent shooting, as the SummerBulls have gotten off to a 3-0 start.

The numbers prove how dominant Goudelock has been in Vegas, but they don't present a full picture of his control. Goudelock has often looked like a ringer in a college intramural game, a shot maker too talented for this level of competition. As he's drained pull-up three-pointers and crafty floaters in the lane while defenses looked on helplessly, the 6'3 guard can only wonder what else he has to do to accomplish his goal of securing a guaranteed contract in the NBA next season. Goudelock knows he's made strides. 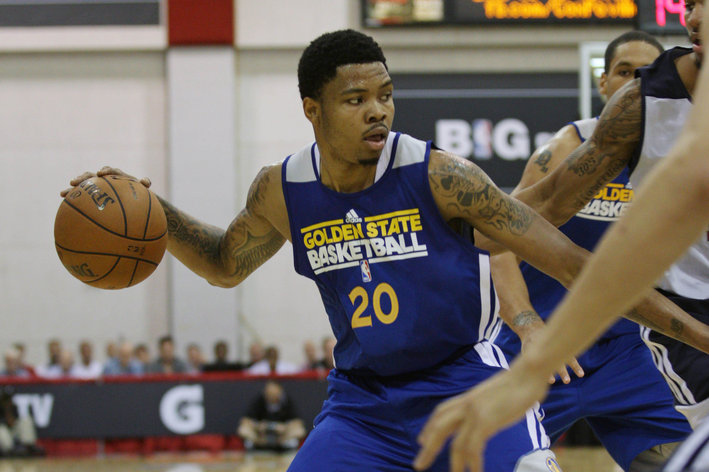 Bazemore is another player out to make a name for himself in Summer League.

"Last year was the first time that I exclusively played point guard," Goudelock told SB Nation on Tuesday after scoring all five of the Bulls' overtime points against the Trail Blazers. "I learned so much about being a leader and running a team. When to take shots, when not to take shots. Just being a better basketball player and fighting through adversity. The D-League . . . there are a lot of things going on down there."

Goudelock would know. He spent last season playing in the southern tip of Texas for the D-League's Rio Grande Valley Vipers. For all the glamors of the NBA lifestyle, the D-League is the exact opposite. There are no first class flights or stays at fancy hotels. Goudelock was earning only $2,400 per month, a stipend so tiny he was forced to borrow money from his college-aged girlfriend. Goudelock said there were days he went without eating.

While the way of life was hard in the D-League, the game rarely was. Goudelock took home MVP honors by averaging 21.4 points and 5.8 assists in 37 games. After a string of injuries to Lakers guards late in the regular season that included Kobe Bryant's torn Achilles, Goudelock was called up to the team that selected him No. 46 overall in the 2011 draft.

Without Bryant, Steve Blake and Jodie Meeks in the playoffs, the Lakers turned to Goudelock as a starter alongside Darius Morris in Game 3 of their first-round series against the Spurs. All Goudelock did was score 20 points on 8-of-17 shooting.

Goudelock's quick trigger and confidence in his shooting stroke was enough to impress Bryant. Goudelock has had his share of impressive accomplishments in basketball, but it's hard to top Kobe nicknaming him "Mini Mamba."

Scoring 20 points in a playoff game finally put Goudelock on the NBA radar, but he never doubted his ability to play in the best league in the world.

"I've had that confidence since college, probably my sophomore year," Goudelock told SB Nation. "I just haven't gotten the opportunity I'm looking for. That's why I'm out here working hard, trying to get somebody to bite on me. I just need the opportunity."

Getting buckets is nothing new for Goudelock. He was a dynamic scorer during his four years at College of Charleston, and keyed one of the biggest wins in school history during his time there.

The Cougars welcomed the defending national champion North Carolina Tar Heels in January 2010, during Goudelock's junior year. Goudelock scored the last eight points of regulation, and sent the game to overtime on a deep three-pointer over the outstretched arms of future first-round draft pick Ed Davis with two seconds remaining.

''He was so far back, and it was contested,'' teammate Donavan Monroe would tell reporters after the game. ''It was just the slowest shot ever.''

College of Charleston would prevail in overtime, and Goudelock ended the game with a team-high 24 points.

Goudelock knows finding a permanent spot in the NBA will continue to be a struggle, even after all he's done to cement his place. At 6'3, he's undersized for a shooting guard and doesn't have the natural playmaking instincts of a point guard. He also only has a 6'4 wingspan, which affects his ability to shoot over bigger defenders and prevents him from challenging certain shots defensively.

But even if undersized scoring guards appear to be unwanted in today's NBA, there might always be a place for someone who can quickly stockpile points. In a year when C.J. McCollum, a 6'3 combo guard out of Lehigh, was selected No. 10 overall in the draft, it's a wonder Goudelock is having a hard time finding his spot.

Goudelock's ability to stick in the NBA might come down to his ability to develop point guard skills. Retreads like Mike James and Derek Fisher found a spot on NBA rosters last year despite lacking NBA athleticism in their elder state, but coaches trusted their steady hand with the ball.

Point guard continues to be a work in progess from Goudelock, but he believes he can develop into a sound playmaker. Even still, he knows how he'll make his money.

"People love my scoring ability, that's what I'm gonna be used for," Goudelock said. "Just play my game. They don't want me to do anything I'm not used to doing."

What Andrew Goudelock is used to doing is scoring points at every level he's ever played at. It's a skill that could one day land an NBA team a nice bargain.

• The Lakers' weird season, as seen from the end of the bench