The Portland Trail Blazers have retooled their bench and are looking to push for the playoffs in a deep Western Conference. SB Nation talked to head coach Terry Stotts about the impact of their new moves.

LAS VEGAS -- The Portland Trail Blazers didn’t add a game-changer in free agency and they didn’t pull off a mega trade that brought a savior to the Pacific Northwest. What second-year general manager Neil Olshey did do was add a number of pieces to a team with a solid foundation but little depth in one of the most successful under-the-radar makeovers in the league.

Olshey drafted a pair of NBA-ready players in intriguing scoring guard C.J. McCollum and Pac-12 Player of the Year Allen Crabbe, who slid into the second round. In free agency, the Blazers grabbed underrated wing shooter Dorell Wright, and in what may have been a masterstroke, Olshey landed center Robin Lopez as part of a three-team deal with the Pelicans that cost him nothing but second-rounder Jeff Withey, a future second-round pick and cash.

Rounding out the new additions is former top-five pick Thomas Robinson, who had a tough debut as a rookie in Sacramento and is now on his third team. Robinson is a classic buy-low addition who has a chance to carve out a role on a team without the baggage of expectations. All of those moves should help a core that already has players like Damian Lillard, LaMarcus Aldridge, Wes Matthews and Nicolas Batum in place, but struggled to field competent lineups once any of those players were on the bench.

"We addressed a lot of our needs," second-year coach Terry Stotts said. "We got a defensive-minded center. We added some scoring on the bench. We added some talented youth. So I think between our draft, free agency and trades, we addressed all the needs that we wanted to coming into that period." 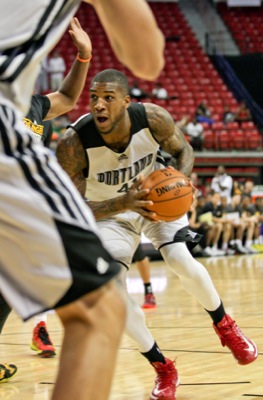 The new Blazers forward talks about his fresh start

Stotts talked to SB Nation about the new additions and the future of the team:

SB Nation: Getting Robin [Lopez] the way you did, it’s hard to get a 25-year-old center coming off the kind of season he had.

Stotts: I think Neil Olshey did a fantastic job with everything, but that’s what our team needed was a defensive-minded young center who accepts his role, and I think he’ll be well accepted in Portland. The two areas we needed to address: we needed to become a better defensive team -- Robin will certainly help us with that -- and we needed to get some scoring off the bench.

SB: How do you think Robin and LaMarcus will work together?

Stotts: I think they’ll complement each other really well. From an offensive standpoint, I don’t think things change much. With Robin, we’ll run a lot of the same things. He’s a good screener and he’ll help us on the offensive end, but more so defensively and rebounding. Robin will take the heavy hitting and Robin blocks out well. I think it will enable LaMarcus to be an even better rebounder. Our emphasis, protecting the paint, protecting the rim, will be improved by both those guys.

SB: You mentioned the bench, it’s no secret you had to play your starters a lot of minutes. How do you think Dorell Wright will factor with you guys?

Stotts: You look at the best offensive teams in the league, and other than Denver, all of them had a strong three-point component. We added three-point shooting with Dorell Wright, C.J. McCollum, Allen Crabbe. So having the ability to space the floor, make threes will make it easier for LaMarcus on the block. The game is about spacing and getting to the rim, and shooting threes is really important and Dorell adds to that dimension.

Stotts: I see a young, talented player. He had a disappointing first year in the league, but I think it was a learning experience for him. He’ll have an opportunity in Portland where maybe the expectations aren’t on him as they were in Sacramento being the fifth pick in the draft. You see he has the ability to pursue the ball on both ends of the floor on the glass. Playing behind LaMarcus and playing with LaMarcus, he gives us some strength and size, and he’s athletic. He needs to adjust to how we play at the offensive end and I think he’ll complement our players pretty well.

SB: In years past, people might have asked, ‘What is C.J. McCollum’? Now, people are less concerned with assigning positions. How do you look at him as a player?

Stotts: I look at him as a playmaker. He’ll play with Damian. He’ll play the point when Damian’s not in. He has an innate ability to score the ball. He needs to work on running a team, but I’m pleased in summer league he’s been able to handle the pressure of being the primary ballhandler, and that’s what we’re looking for out of our backup point guard. He can score the ball but he’s going to be out there with scorers on the court. He’ll have the opportunity to play with the ball, to play off the ball, and I think the way we play with better players on the floor, that will make him even a better player. He’s used to carrying the load and he won’t have to carry the load, so I think he’ll adjust his game accordingly.

SB: You got a lot more versatile with guys who can play different positions.

Stotts: We have multiple players who can play at least two positions. Damian, C.J., Wes, Nic, Dorell, LA, even Meyers [Leonard], Joel Freeland, Victor Claver, all those guys can play at least two positions. When you have that versatility it allows me to play multiple lineups and create matchups that are favorable for us. When you have that versatility and you don’t have to plug guys into spots. It makes it better for everybody.

SB: This seems like a team that’s ready to compete. Do you put expectations on this team?

• The Lakers' weird season, as seen from the end of the bench