It's going to be weird for Boston fans to see Paul Pierce in a different jersey. Paul Flannery reflects on what Pierce meant to Celtics fans for the past 15 years.

Share All sharing options for: Paul Pierce, a proper Bostonian

It's hard to pinpoint the exact moment when Paul Pierce truly understood Boston and when the city came to embrace the kid from Inglewood, Calif., of all places, as one of our own.

Some point to the aftermath of the 2000 stabbing incident in a long-departed downtown club when he went out and played 82 games after enduring wounds to his face, neck and back and undergoing surgery. Others point to the 2002 playoff comeback against the Nets when Pierce and Antoine Walker (mostly Pierce) whipped the Garden crowd into an unholy roar, punctuated by Pierce jumping on the scorers' table in an iconic image that still lives in various MAKE SOME NOIZE videoboard montages.

He was free and wild back then, and he belonged to a group of younger fans who loved him for his audaciousness. Many of them grew up with Pierce the way those from my generation were brought up by Bird and McHale and others had Havlicek, Russell or even Cousy. This was their moment as much as it was his, and they held tightly to it through so many dark years.

Personally, I think it was best summed up by his reaction to his 41-point Game 7 battle with LeBron James in the 2008 playoffs, when he noted that he finally had his piece of Celtics lore along with Bird and Dominique Wilkins. Pierce wanted so badly to have that iconic moment and to place his name in that select group of franchise greats. He got the history and the tradition of the place, and there's nothing Bostonians love more than celebrating our own achievements.

He was arrogant and defiant about his business in a way that resonated from the gilded towers of Cambridge to the corner taverns in Charlestown.

But really, what marked Pierce's 15-year tenure in Boston is that it lasted 15 years. We got to know his mannerisms and the never-in-a-hurry, always-with-a-purpose pace to his game. There was never a doubt when he would work his man down to the left elbow that he was about to hit that step-back jumper right in somebody's face. He was arrogant and defiant about his business in a way that resonated from the gilded towers of Cambridge to the corner taverns in Charlestown.

It wasn't always easy, of course. Pierce carried a bad-to-mediocre team for so many years that many failed to grasp the truly outrageous seasons he put up with such regularity. From 2000-2007, he averaged 25 points, seven rebounds and four assists without a whole lot of help.

He had his share of missteps along the way, including the bandage game against the Pacers and the infamous, "I'm the classic case of a great player on a bad team," quote, neither of which sat too well with the locals, even though his words were right on the money.

In the post-Antoine years, he initially clashed with Doc Rivers and struggled to come to grips with his position as the face of the franchise. In a 2005 Boston magazine profile, he noted, "Personally, I think I've got split personalities, and I may need a psychiatrist. Dr. Jekyll and Mr. Hyde. Seriously. I'm serious about this."

You always knew where you stood with Pierce. He was incapable of hiding his moods, which could run hot and cold depending on the day. If he was feeling good, he might be inclined to hold court for half an hour about his love of deep-sea fishing. If he was brooding about something, it didn't take long to catch that negative vibe.

Thank you, Paul and KG 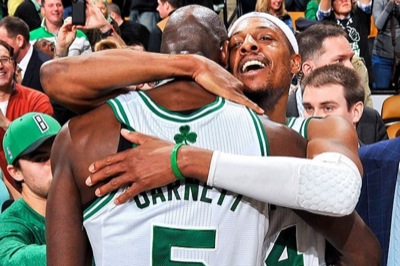 That didn't make him difficult, it made him human and it fit right in with our general pathos about people in general and manners in particular. Regardless, he always gave you an honest effort, and that's all that really mattered. More than that, he wanted to be here, a fact that wasn't lost on the core of Celtics fans who waited patiently for better times.

When he was finally rewarded with the additions of Kevin Garnett and Ray Allen, Pierce truly became The Captain, a role he took seriously. The last shot was generally his and he never backed down from the challenge or shirked the responsibility that came with being the out-front leader of a championship team.

The end was difficult to digest, as these things often are. Pierce's last minutes as a Celtic came at the end of a furious fourth quarter rally against the Knicks that ended in a Game 6 loss at the Garden. What many of us suspected, but few knew for sure, was that it was over. But how do you say goodbye after all that?

If one could stop time and ask for a do-over, it was the moment when Rivers took him out of the game as the rally fizzled. This called for a grand acknowledgement in the tradition of an Irish wake, but there were no pipers on hand to mark the occasion, and only a handful of people noticed. All of which was completely understandable and also unconscionably sad.

"He's one of the greatest Celtics to ever play," Rivers said after the game. "He's done so much for this franchise. Listen, we live in a day and time where guys are changing teams like socks. Paul has chosen to stay here throughout his career when clearly he had all rights to leave and he chose to stay here. I have so much respect for him for that. He wanted to get it done here. He made that choice. I hope he's remembered for that."

He'll be remembered for that and so much more. Pierce played more games in a Boston uniform than anyone other than John Havlicek and Robert Parish, and scored more points that everyone other than Hondo. In the all-time starting five, I'd slot him next to Cousy and alongside Bird, McHale and Russell, because who cares about positions anymore?

It's a cruel reality of sports that he has to spend his final days somewhere else, and it feels all kinds of wrong that he'll do it in Brooklyn. That's the business, and he always understood it better than most. The Celtics are starting over and there's no room for aging legends anymore. If there's any poetic justice left, he'll find a way back to Boston at some point before it's all over, because this is where he belongs.

• The rise of Jonas Valanciunas