Jordan Hamilton, Austin Rivers and John Henson are three of the many young veterans at Summer League preparing for a pivotal year if they want to actually stick in the NBA.

Share All sharing options for: NBA Summer League 2013: 3 young players at a crossroads

LAS VEGAS -- Jordan Hamilton never imagined that when he got to the NBA, he would have to wait two years to feel like he was actually in the league. Acquired in a draft-day deal by the Nuggets in 2011, he played a grand total of 655 minutes in his first two seasons, an experience he described as "humbling."

"I never thought I’d come to a team and not play at all," Hamilton told SB Nation. "But I’ve learned a lot from coach (George) Karl. He taught me a lot of things both on and off the court. I admire coach Karl. It’s tough being a coach. I never rode him or anything like that. I just sat back and waited my turn and hopefully this is it."

Opportunity has presented itself for the smooth forward, who won’t turn 23 until January. With Andre Iguodala in Golden State and Corey Brewer in Minnesota, there’s an opening on the wing. Combine that with the recovery for injured starter Danilo Gallinari and a new coach in Brian Shaw, and suddenly it’s a whole new day.

This is the opportunity I’ve been waiting for to finally feel like I’m an NBA player."-Jordan Hamilton on the Nuggets' situation

"We have a void at that particular position and he’s been in the system for a couple of years," Shaw told me. "It’s time to see what he can do."

Hamilton’s summer league experience did not start well. He struggled in his first two games, which was understandable, considering the death of his cousin was weighing heavily on his mind. Hamilton went home to Los Angeles for the funeral and the time away helped him clear his head.

He scored 18 points of his 23 points in the first quarter of the Nuggets’ game against the Pelicans on Wednesday and followed that up with a 25-point performance on Thursday. He’s shooting 44 percent from behind the arc and showing the kind of versatile offensive game that got him into the league after two years at Texas.

"I’ve been having more success the last two games mainly because I got some things off my chest and spending time with family," Hamilton said. "Now I’m doing a lot better. I came back with a plan. I figure my cousin’s in a better place right now."

His play caught Shaw’s eye, who was encouraged by his recent games.

"I really saw two different guys," Shaw said. "He struggled in the first two games, and last two games he’s shot the ball really well. We know he has the ability do that and we probably have to rely on him in the rotation this year, so I just want to see him continue to grow."

While this year’s summer league lacks some of the immediate star power of previous years, Hamilton is one of many young veterans who are looking to make the jump from untapped potential to reliable rotation players. 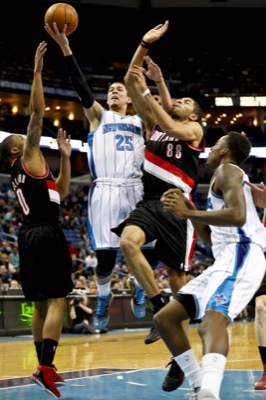 At the Hive on how the Pelicans' guard can improve on his rookie season.

AUSTIN RIVERS HAS A CHIP ON HIS SHOULDER

Austin Rivers doesn’t have to be told that his rookie season was a struggle. With Eric Gordon out with an injury and a general lack of depth on the then-Hornets, Rivers was thrust into a rotation role that he simply wasn’t ready to handle.

His shot was flat, his playmaking skills needed work, and for the first time in his career, he had to seriously question what he was doing on the court. Yet Rivers has never lacked for confidence.

"I have a chip on my shoulder," Rivers said. "Last year was up and down for me. I didn’t have a great year. That was tough. That was the first time in my life that everything wasn’t roses and successful. I had to look in the mirror and be like, ‘All right. What am I going to do?’"

After the All-Star break Rivers finally began performing with some measure of consistency. He shot over 50 percent from the floor and better than 40 percent from three-point range, but then he broke his right hand, which cost him the rest of the season.

"This is a test," Rivers said he told himself. "I’m going to rehab the heck out of my hand. I’m going to come back better."

Things are different now. With Gordon back, along with new additions Jrue Holiday and Tyreke Evans, Rivers will have to earn his time. Holiday and Gordon will play major minutes and Evans is expected to assume a sixth-man role that will also soak up playing time.

Where that leaves Rivers is anyone’s guess, but he put in the time to rehab his hand and came to Las Vegas feeling stronger, healthier and wiser. In four games, he led the Pelicans in points, minutes and shots. He still has a long way to go to become the kind of playmaking guard they were hoping for when they drafted him in the lottery, and his jumper still needs some work, but Rivers was satisfied with his performance.

"You can see the difference between last year and this year," Rivers said. "I wanted to show people that I’m healthy, I’m back and this year is a big year for me."

JOHN HENSON IMPRESSES, BUT DOES HE HAVE A ROLE?

The running joke along press row all week was that John Henson was too good for summer league. In three games with the Bucks, Henson scored 44 points and grabbed 31 rebounds. He was too big for his opponents to handle and too skilled for many of the journeymen and long shots he was matched up against.

"That’s for y’all to decide, man," Henson said when asked if he thought he was the best player here. "I feel like I’m one of the best. You’ve got to have confidence in yourself. I just want to show I can play in this league."

Too good for this 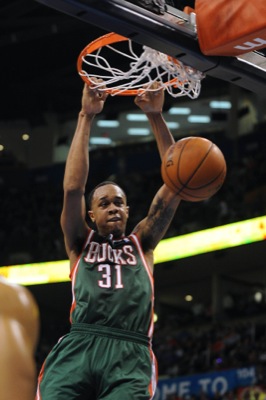 Henson played only 827 minutes as a rookie, but his per-36 numbers -- 16.5 points, 12.9 rebounds and a PER of of 18.2 -- forecast big things for the forward. The issue is that the Bucks are loaded up front with Larry Sanders, Ersan Ilyasova and developing bigs like Ekpe Udoh and Gustavo Ayon. In one of the odder moves of the summer, the Bucks also signed Zaza Pachulia to a three-year deal, further clouding the frontcourt picture.

"Just play hard, man, and show your stuff and come to training camp ready," Henson said. "Me, Larry, Ers, Ekpe, Goose, Zaza: It’s going to be battles. But hey, this is the NBA. It’s not going to come easy."

Because of his 6'11 size and offensive skills, Henson is an intriguing prospect. Because of his slight 220-pound frame, it’s an open question of where he fits best, especially on a team with so many options.

"It’s wherever I’m at," Henson said with a grin when asked where he felt most comfortable. The thought of pairing him with Sanders, an emerging shotblocking force, feels like a natural fit, but again, there’s a lot of competition.

"Larry, defensively, is way far advanced from me. It can be a good 1-2 punch," Henson said. "With me and Larry, one thing that’s not going to happen is layups. We’re going to protect the rim. If we can protect the rim, I think we’ll be alright."

Summer league is a reminder that being in the NBA and making it in the league are not the same thing. Even at their young ages, Hamilton, Rivers and Henson know that opportunity can be fleeting and that the time is now to show what they can do.

• LaMarcus Aldridge and the flip side of shorter contracts

• Dwight Howard is the greatest NBA player ever (Dan on Fire)