After spending last season out of the NBA, the 26-year-old is trying to keep a positive outlook on his career.

Share All sharing options for: Chris Douglas-Roberts, with career in flux, remains positive

LAS VEGAS -- Chris Douglas-Roberts might have an old soul, but he's still young. At 26, he has all kinds of experience -- he's been a starter and a role player, he's played in New Jersey and in Italy -- but has plenty of basketball left. Playing for the Los Angeles Lakers in summer league, Douglas-Roberts is trying to show he can fit in on an NBA team this coming season. Following a 72-68 win over the Milwaukee Bucks, he discussed his motivation, staying positive and more:

You have two young kids, what do you know now that you didn't before becoming a father?

Does that help you keep perspective in tough times, like when you got cut at the end of Lakers training camp last year. Did it help keep you grounded?

No. Honestly, no it doesn't help at all unfortunately, ‘cause it's two totally different things. I try to keep my family and my career very separate. It's just like if something happens at home I don't bring it to my job and if something happens with my job, there's really nothing anybody can do to change the way that feels.

When you write on Tumblr, you seem like you have a great, positive outlook on your career and where you are. On your podcast with Mike Trudell [of Lakers.com], you called last year a failure because you were out of the NBA. Is it kind of a constant battle to keep perspective yourself?

Yes. That's the best way to put it, it's a constant battle within yourself. You know what's right, you have all the advice for everybody else but when things happen it's still a tough thing to deal with regardless. Even though you have the right perspective, you're very positive, when life throws a curveball at you, you still have to deal with it. And how you deal with it is up to you. Sometimes, it's hard to take my own advice.

Paul Flannery takes a look at three players at Summer League whose 2013-14 season could make their careers.

Most guys aren't as open as you are with the media. Why are you willing to present yourself this way when a lot of others would be afraid their words would be twisted?

For some reason all through my career I've always been the one the media comes to with these type of questions, you know what I'm saying? I've never really volunteered it, you know? I don't know what it is, it's just a part of it now. I'm not afraid to put it out there ‘cause I'm not the only one. It's a lot of guys who feel like me or are in my situation. If anything, I just want to give that perspective. I know this is a very superstar-driven league and also there are more guys out there who are not in that position and they really don't have a voice and they're kind of overlooked a lot. So, if I have to speak on everybody's behalf in that position, I will. 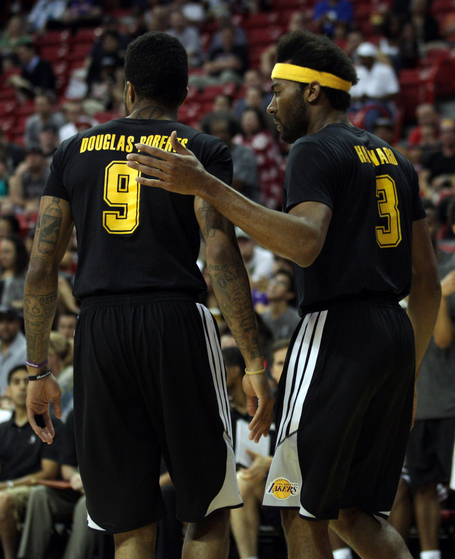 No one playing in summer league is a superstar. How are you trying to help the other guys in this locker room?

Who played that role for you?

Besides my family, Jalen Rose was always a very positive figure in my life. Keyon Dooling, veteran guy who had his own issues and battles that he just recently made public. But he was always positive. I think you really need that. You really need somebody. You can't maneuver in this business without it.

How much of this business is about luck and where you end up?

It is luck ‘cause you really don't have any control over where you're drafted or picked up, so you could end up on a team where everybody's young and nobody really knows the way and you have to figure it out on your own. And you're going to make mistakes when you go down that route. Which is fine. I feel like learning experience is the best experience.

How are you feeling about this week in Vegas?

You watch a lot of film, you've mentioned you've been watching a lot of Scottie Pippen tape. What sorts of things have you been focusing on lately?

Small things. The other side of the floor, basically. A lot of the game is played on one side of the floor but the best teams utilize both sides of the floor, so I've just been trying to see where those passes are, get guys involved. Sort of like, you know, you kind of do all the other things. I mean, Scottie was one of the greatest ever but he made his mark by doing all of the little things ‘cause he played with Jordan. Of course, you can't be 1A so you have to do a lot of things and that's what he did.

What have you been reading?

The Energy Bus. That's a very good book. It's just about positive energy. To make a long story short, it's about a bus driver who had a lot of rough points but everybody who gets on her bus, she kind of changes their life in some sort of way. She's just extremely positive and that positive energy is contagious and they take it on.

• LaMarcus Aldridge and the flip side of shorter contracts

• Dwight Howard is the greatest NBA player ever (Dan on Fire)