Pierre Jackson's introduction to the NBA went differently than most. We run down the second-round pick's weird week at the NBA Summer League.

LAS VEGAS -- Pierre Jackson used to attend summer league as a fan. The first time, he was in seventh grade. He met Dwight Howard and Jameer Nelson and remembers it vividly. If the Las Vegas native was a little too amped or anxious over his three games there, you can forgive him.

"I don't know if y'all was behind the bench but my grandma and my mom was actin' a fool like they usually do," the New Orleans Pelicans point guard said after his first game last Sunday.

For rookies at summer league, there are usually some jitters. For Jackson, picked No. 42 overall by the 76ers and traded to the Pelicans, there was added pressure. He'd watched games at the Thomas & Mack Center before, but never stepped foot on the floor as a player. He could hear his family and friends. He could hear Quincy Acy, his "big brother" from Baylor, yelling out his name while he was on the court.

"I tried to embarrass him a little bit," said Acy, a power forward for the Toronto Raptors. "He didn't want to look too excited or look like he wasn't being serious, so he just kind of gave me one of those [nods] and kept going."

A closer look at Pierre Jackson 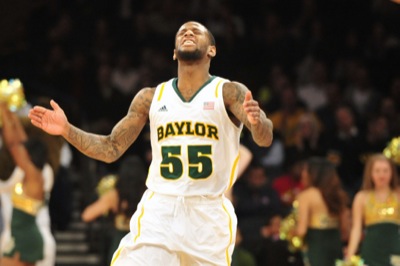 At the Hive breaks down his game

A day prior to his first game, Jackson arrived at Desert Pines High School early to get some shots up before his first practice with the Pelicans. The last time Jackson entered that Desert Pines gym, he was about to have his jersey retired. He thought back to P.E. class, to running around the halls as a freshman and rehearsing for graduation. Since his last game there, he's gone from an under-recruited prospect to winning an NJCAA Championship with the College of Southern Idaho to making the Elite Eight with Baylor to being tackled by his younger brother when selected in the draft. After defying all sorts of odds to get drafted, what Jackson's most proud of is representing his family, Las Vegas, Baylor and CSI.

It turned out to be a hectic week and a half. He missed New Orleans' first game and all of its pre-summer league practices, unable to get on the court with his teammates until the trade with the 76ers officially went through. Midweek, Jackson was separated from them again and missed another game, having come down with pinkeye. It was awful timing, but he was well enough to play in the Pelicans' final summer league game on Friday.

"It's better than having any broken bones or pulled muscles or anything, so I'll be alright," Jackson said postgame, his left eye still noticeably red and swollen.

Jackson's performance on the court was a mixed bag. He was always the quickest player on the floor, but shot poorly. He made some perfect passes, but sometimes dribbled into traffic.

New Orleans' coaching staff wasn't concerned about his offense, asking him to be a pest on the other end and push the ball in transition. Jackson would have liked to have taken better care of the ball and made more shots, but he got positive feedback for his ball pressure. Those close to him were just happy to see him wearing that Pelicans jersey. Acy called it "an unbelievable feeling" to watch Jackson at this level.

"I just remember long nights in the gym," said Cleveland Cavaliers forward Carrick Felix, who played with Jackson at CSI before transferring to Arizona State.

In those days, they'd try to tear one another's head off in pick-up games. Then they'd talk about where they were, where they wanted to be. On Monday they met in a different context, but competed the same way, cracking jokes the whole way through.

Summer league means something for everyone involved. For rookies, it's working with a professional coaching staff and representing the team that drafted you. For second-and-third year NBAers, it's an opportunity to show what you've been working on -- a chance to expand your game. For players on the fringe, it's where you can show you belong in the league.

For Jackson, it was even more than all of that. We don't know what his NBA future holds, but summer league was a homecoming. It was taking pictures with fans, it was being on a stage he once admired.

• Why the NBA just gave the Thunder $15 million