Share All sharing options for: The NBA amnesty clause, punitive luxury tax and the playing field

Rick Bonnell of the Charlotte Observer had an interesting thought the other day:

Raising the luxury tax on the NBA's big spenders only counts for something if the new rates are punitive enough to change teams' behavior.

It's starting to change behavior. [...] When the Lakers and Heat - definitive big-market teams ready to outgun anyone financially - are cutting rotation players to trim their tax bills, the new collective bargaining agreement is starting to work.

This type of action isn't actually new for the Lakers -- they've long sought to make shrewd moves to reduce the team's tax bill. Don't forget the Derek Fisher Trade Heard 'Round the World.

But I think this telling (which is in many ways David Stern's line of argument) ignores the fundamental purpose of the amnesty clause for most teams, which is not to reduce a high luxury tax bill, but to free up cap space with which other players can be signed. When you consider that amnestied players still get paid by the team doing the waiving, it's not really much of a money-saving deal. In the case of the Lakers, waiving Metta World Peace under amnesty did drop the tax bill. But then L.A. had to replace MWP with players who make money and therefore boost that tax bill back up.

The Heat will save money due to the amnesty of Mike Miller, sure. But they are also reportedly trying very hard to pay some more tax to land Greg Oden. World Peace was waived by one tax team and quickly signed by another, the Knicks. If the MWP amnesty is an example of the luxury tax structure working as intended, what exactly do we take from MWP signing with the Knicks? 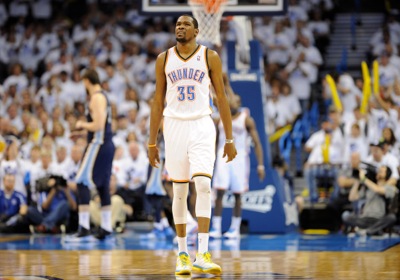 Tom Ziller on another weird loophole created by the new CBA

And let's not forget that the luxury tax structure doesn't only affect the high-revenue teams. It was the Oklahoma City Thunder, after all -- a team in a market far smaller than even Charlotte -- who felt required to trade James Harden due to tax and salary cap flexibility concerns. In theory, if the Bobcats' young core develops, Charlotte would face such a situation in the future. High-revenue (a better indicator than the usual "big market," in my book) teams would still be better able to take on tax bills for a competitive edge. Without total revenue redistribution, like the NFL largely has due to its unique national TV structure, you're never going to get Charlotte and OKC on near the same financial playing field as Miami and Los Angeles.

In the end, what the NBA is after is a tighter payroll spread among all teams. The league not only wants high-revenue teams to have smaller payrolls, it wants the lower-revenue teams to have higher payrolls. The salary floor was raised to 90 percent of the cap, and additional mechanisms to give teams under the cap and under the tax a better opportunity to add players were put in the place. Some of these mechanisms, like the room exception, are straightforward. Others, like the creation of a second mid-level exception for teams at the tax line, are perceived as restrictions on high-payroll teams but are really also mechanisms to bring lower payrolls up: instead of making the mid-level low across the board, the league kept one relatively high for use among lower-payroll squads. The league would love nothing more, it appears, than 30 teams with $65 million payrolls. That's the competitive balance that Stern and Silver seek.

But teams at all levels love the amnesty clause, because it's a massive eraser. Charlotte used amnesty on Tyrus Thomas so that it could sign Al Jefferson, who might be either a player on a contract soon to be worthy of amnesty or the best player in Bobcats history (or both). The amnesty clause is a blunt weapon with many uses, none of which is payroll parity. This is not the example of the new CBA working you are looking for.

While we don't know whether Jefferson's salary will end up money well-spent, it's undeniable teams like the Bobcats and the Sacramento Kings - small-market franchises losing a ton of games of late - have a better chance. It's a more-level competition, even if it will never reach level.

That was precisely Stern's objective when he risked losing the 2011-12 season to a lockout.

Nope. The objective was to significantly tamp down the players' cut of league revenue. Once the two sides came to an agreement that slashed billions from the players' earnings over the life of the deal, the rest was window dressing, more an argument among owners than a battle between the union and league. (The union did, however, seek to preserve the good fortunes of the vast NBA middle class at the expensive of stars. Hence the quibbling over the mid-level, the bi-annual and other small items.)