John Wall is reportedly working out a max contract extension with the Wizards. There are two separate questions to consider.

It appears that John Wall will indeed get his max deal from the Washington Wizards, tattoos or not. Marc Stein reports that a maximum-salary 5-year deal is in the offing and should be inked by the end of July. The exact salary won't be known until the league sets the 2014-15 salary cap -- the deal doesn't go into effect until the 2014-15 season -- but the range is roughly $78-82 million. The first-year salary should be pretty close to $15 million, which is not a small number.

There are two separate, distinct questions here: is John Wall worth $15 million and rising per year, and should the Wizards offer this deal? The second question is only partially dependent on the former in today's NBA and in the Wizards' specific situation.

Is he worth it? Based on some numbers we ran last season on the dollar value of production, Wall's 2012-13 season was worth $10.7 million, which is pretty high but decidedly less than $15 million. But Wall was injured to start the year, and played just 1,600 total minutes. He averaged about 2,500 in his first two seasons. If Wall had played that many minutes last season and produced at the same rate, he'd have given the Wizards $16.7 million in value.

The other thing to consider is that Wall is 22 years old. Players typically peak as players from age 25-29. This extension would apply from age 24 to age 28. So that's a span in which Wall is likely, based on history, to perform better than he has in the past. And if he's already "worth it" if healthy, if he gets better he provides even more value.

But that's just one way of looking at value, and it admittedly doesn't incorporate enough defense into the mix. Even if the numbers indicated Wall is not worth the max, it's still a totally separate question as to whether the Wizards should make the deal. And this is where a lot of contract criticism goes off the rails.

Wall on track to get his max 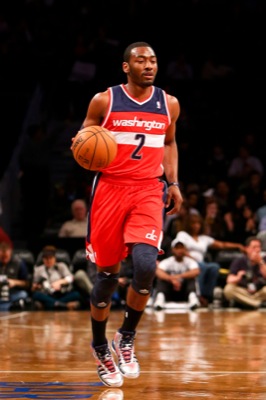 In many ways, contract value is relative: what other players produce and get paid are relevant to the worth of a player you're looking at locking up. But you can't forget that in most cases those comparisons aren't attainable. Consider the very best players in the league, like LeBron James and Kevin Durant. Both of them and Wall could all be at the max contract level in 2014. LeBron and Durant are better, so their contract value will be much higher. Wall's not going to be the best max player, and in a lot of folks' minds there's a strict class of player who deserves the max. It's registered as a sort of elite class instead of a salary figure. LeBron is a max. Durant is a max. Wall isn't close to LeBron or Durant; therefore, Wall is not a max. That's a poor way to look at it, because the Wizards aren't being given the opportunity to choose between LeBron and Wall. They are being asked to choose between spending that money on Wall, and spending it on some unknown player or set of players.

That said, because restricted free agency is a powerful arrow in the team's quiver, I'm not totally convinced that waiting and trying to either a) draw out some salary concessions for the good of the team, and b) bolstering the evidence Wall's worth it is a bad play. Early extensions are good for two things: locking up the league's best players as far away from free agency as possible and getting a discount on a good prospect. You have a Durant, Westbrook, Rose, Love? You give 'em that max early extension. Wall's not in that class. He's likely worth the max, but he's not an All-NBA guy at this point. Those four all were.

Stephen Curry and Jrue Holiday are good examples of getting a discount on a good prospect (a great prospect in Curry's case). The Warriors were able to leverage Curry's bad ankle into a steal of a deal through early extension. Had Golden State waited, Curry's 2012-13 season would surely have resulted in a max deal this month. So the Warriors saved about $4 million per year by pulling the trigger a year ago.

But with Wall and a max deal, there's not a whole lot of timing upside. If you fail to ink him now, there's no risk he'd be more expensive next summer as a restricted free agent: the max is the max. The reason you lock up guys like Durant as early as possible is because there's almost nothing that can happen to stop them from getting a max eventually anyway, so you get it done in order to work on other deals and use it as a recruitment tool. If Wall has a rough season and doesn't already have an extension in place, you could see him getting less than the max next summer.

So in this case, I think the opposite of what may be the conventional wisdom. I do think Wall is worth a max contract right now, but I'm not sure there's a compelling reason for the Wizards to make it happen as it's been reported. If you can work in a team option or assign some of the money to a reasonable incentive (like an All-Star berth or playoff series victory), maybe there's the impetus to do it now. I just don't see it as things stand. There's little risk and a tangible potential benefit in waiting for 2014.

• Kyrie Irving "had a lot of growing up to do"

• Flannery: Analytics and coaching in the NBA