In 2012-13, Carmelo Anthony did something he'd never done before. Can he do it again?

With all due respect to Andrea Bargnani, Tyson Chandler and Amar'e Stoudemire's wheels, the fate of the New York Knicks rests in the hands of Carmelo Anthony. The fate of the Knicks, then, has something in common with the ball itself, as Melo took total control over New York's offense in 2012-13. Anthony registered the highest usage rate (1) of his career (35.6 percent), and the highest in the NBA. Heck, Kobe Bryant has only had two seasons with usage rates higher than that. 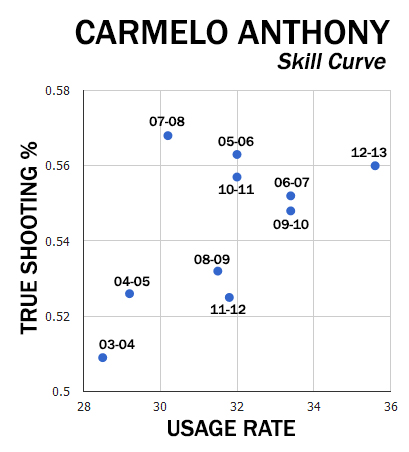 Melo has always been a high-level shot taker, but in 2012-13, he was both a high-level shot taker and an efficient one. Take a look at the skill curve on the right.(2) Ignore the two seasons to the far left: that's his rookie and sophomore season. The next seven seasons -- from 2005-06 to 2011-12 -- show a pattern we'd expect based on NBA norms: the higher the usage rate, the lower the efficiency.(3)

Of those seasons from 2005-06 (his third season) and 2011-12, Melo was generally less efficient the higher his usage registered. That makes sense: if you're taking more shots, quality shots take up a smaller share of the mix. You can't get 20 bunnies a game. (Unless Steve Nash or Rajon Rondo is your point guard, I suppose. No offense to Raymond Felton.) The rule isn't perfect, but the general trend in those seven seasons follows the expectation: the higher Anthony's usage climbs, the less effective each shot becomes.

But in 2012-13, that changed. Dramatically. He had his third-most efficient season ever while taking far greater a share of the offense than he ever had before. He'd always taken a lot of shots, but last season, he went well beyond his norm. Yet he managed to do it efficiently, and by his own historical standards, really efficiently.

Most have credited the shift to power forward for more minutes, but I think that, in addition to that, the Knicks surrounded him with shooters. That certainly relieves pressure from the mid-range and closer, where Anthony does his best work. When you look at the reasons for the great season, the trade for Bargnani comes out two different ways. On the one hand, acquiring him without losing Stoudemire likely means that Melo is returning to small forward. On the other hand, Bargs is a shooter who will stretch the floor, in theory. (He'll be asked to replace Chris Copeland and Steve Novak in that role.)

The other answer as to why Melo had a rather efficient season at such a high usage is as satisfactory: it could be a fluke, and he could revert to his usual low efficiency stylings going forward, especially if the super-high usage is maintained. And there's one other issue worth mentioning: even with his third most efficient season ever, Melo was still in the middle of the pack in efficiency among top NBA scorers. 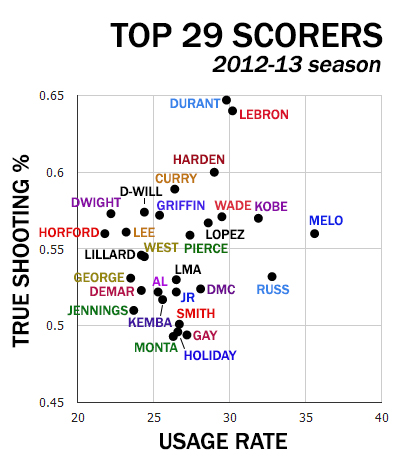 The chart at right shows every player who averaged at least 17 points per game and played enough to qualify for the scoring title, per Basketball Reference. Twenty-nine players made the cut. As you can see, Melo shot more frequently than anyone, and it's not even close. He was, however, really average in terms of efficiency. (Critics will also note that he doesn't offer a whole lot besides scoring, unlike a number of names on this list.) The question becomes whether Melo maintains his incredible usage rate, but sees his efficiency fall in line with his historical skill curve -- that is to say, much lower -- shouldn't he decrease his usage to keep his efficiency afloat?

That's not necessarily a Melo issue, though: it's a Knicks issue. Chandler is a finisher and nothing more on offense. Jason Kidd is gone; he was another rotation player who rarely created shots from himself. Without an available Stoudemire or an aggressive Felton, Pablo Prigioni or Bargnani, it's going to again be up to Melo and J.R. Smith to soak up most of the offense. Perhaps that's the basis of the Bargnani deal: New York's not content to hope for the best with Stoudemire and let Melo and Smith take all of the shots. Bargnani can, in theory, have a pretty high usage rate as well, if he's hitting shots.

And there's this salve for Knickerbockian worries: despite Melo having a mammoth usage rate at mid-rung efficiency, and despite the offense featuring little more than Melo, Smith and lots of threes from Novak and Copeland, New York finished with the No. 3 offense in the entire NBA. It worked. And it can possibly work again ... if Melo makes this new planet his home.

1: Usage rate measures the percentage of his team's possessions a player uses while on the court. If you had a totally egalitarian offense where the five players took turns taking shots in uninterrupted order, each player would have a 20 percent usage rate. So Melo's 35.6 percent is quite nearly two players' shots in such a scheme.

2: Dean Oliver invented the skill curve about a decade ago to show the relationship between usage and efficiency. Refer to his Basketball On Paper for more info.