The Los Angeles Lakers are situated in a proverbial no-man's land next season due to salary cap restriction and losing Dwight Howard, but for Pau Gasol, there's plenty on the line.

Share All sharing options for: Pau Gasol and the Lakers need each other more than ever in 2013-14

Imagine going from being near the top of your game to being considered a liability in a span of six months, yet going through such a demeaning ordeal with all the professionalism and poise of a true NBA veteran, only to be called upon to be a savior by the very entity that ostracized you in the first place.

If you managed to make it through such adverse circumstances, you wouldn't be alone. You'd be just like Pau Gasol.

The Los Angeles Lakers' consummate champion has had to endure his share of embarrassments while in the team's uniform, but he's also been one of the cornerstones of the franchise's latest foray into glory. The Lakers won back-to-back titles with him firmly entrenched as one of their key players and did exactly what they brought him in to do in 2009 and 2010. He was the missing link before things went wrong.

As fast as a team could fire a head coach, hire another and bring in a center that effectively took away what he did best, Gasol vanished. Not in a sense that he declined a great deal from a talent standpoint, but he literally vanished from the Lakers' rotation.

Case in point was back in November, when head coach Mike D'Antoni disrespected the four-time All-Star in the worst way imaginable -- he benched him late in the fourth quarter of a game that the Lakers had a chance to win. He was struggling with eight points on 3-of-10 from the field, so it was understandable to a degree. But what made it such a slight was how he responded afterward:

"I was thinking I'd like to win this game. That's the reason," D'Antoni said, via the Los Angeles Times.

After saying his piece and expressing obvious displeasure, Gasol retreated and deferred to Dwight Howard offensively, the irony being twofold -- first, that Howard didn't fancy the offense even though it took Gasol out of his natural spot on the floor, and secondly that Gasol is a much better player in the low post with a refined game in and around the restricted area. He can create his own shots in the block far better than Howard, yet he was the odd man out because Howard was there. It's a curious conundrum that's fitting for the type of Hollywood drama only Laker-land can deliver.

Fast forward to present day, and D'Antoni is singing an entirely different tune after Howard bolted for the Lone Star State and the Houston Rockets for a myriad of basketball reasons. Te Lakers were left with nothing but several billboard-sized paperweights. But they still had a reliable, incredibly loyal asset in Gasol.

The Lakers' head coach joined ESPN 710 Los Angeles on Tuesday and explained that Gasol would not only be a big part of the Lakers' plans next year, but that he could potentially have his best year ever. That's a complete 180-degree turn from the philosophy of last season, when Gasol was expendable.

Now, Gasol's professionalism and poise will be rewarded with an opportunity to prove he can still play at an elite level and surpass his career averages of 18.4 points, 9.2 rebounds and 1.6 rebounds per game. The Lakers will need every bit of that production out of him in order to sniff the playoffs, much less make any sort of run in the '13-14 postseason. It's an interesting twist of fate, but makes sense.

The Lakers need Pau, and Pau needs the Lakers. At age 33, Gasol has the type of game that lends itself to longevity, somewhat like that of Tim Duncan. He doesn't rely on athleticism or speed to score and defend, but rather his length, intelligence and touch around the basket and from mid-range.

Getting the ball in the paint was an issue for him a season ago, but Howard's out of the picture now and won't take up valuable real estate. The Spaniard will be free to work and recapture some of the magic that made him one of the world's best players as the Lakers' featured big once again. 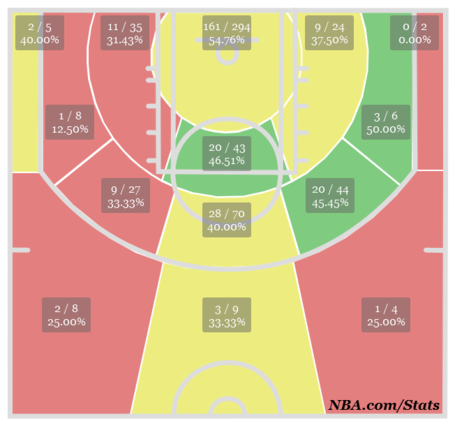 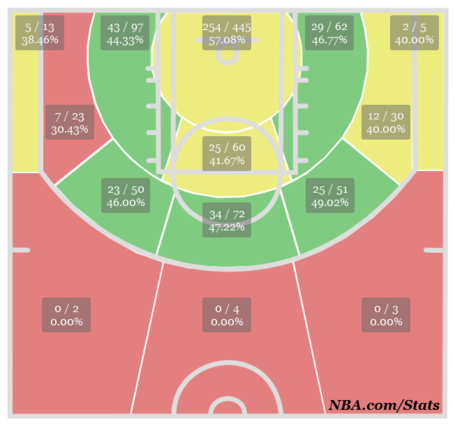 Gasol's shot chart from 2012-13 showcases an anomaly (among many others last season). He totaled just 294 looks inside of eight feet and converted 55 percent from that distance. In the year before, he nearly made that many and shot a higher percentage to boot, going 254-of-445 for 57 percent.

To further illustrate things, he shot just 39 percent from the 16-to-24 foot range in 2012-13 as opposed to 44 percent in 2011-12. That can be attributed to the fact that those shots, which he's proven to be fully capable of making consistently, came more within the framework of the offense rather than as a third option behind Kobe Bryant and Howard and often later in possessions.

That's the effect Howard had on his game, and without him present to occupy all of that space, Gasol should be able to produce substantially better numbers in his comfort zone. He may even exceed them and have one of his best statistical seasons yet, given that Bryant figures to ease his way back into the role of the primary offensive threat coming off a major injury.

The Lakers are banking on it, and Gasol could benefit financially if he can capitalize on his new opportunity to prove that the statistical worsts weren't entirely his fault.

An entire organization and fan base used to winning in bunches are counting on it.