Brandon Jennings, Josh Smith improve the Pistons at the expense of fans' sanity

There's no question the Pistons will be better next season, but will Detroit actually be able to enjoy it?

Share All sharing options for: Brandon Jennings, Josh Smith improve the Pistons at the expense of fans' sanity

All moves made by the Detroit Pistons this offseason need to be viewed with an eye toward what the team lacks: their own 2014 first-round draft pick if it's not within the top eight. The Pistons let that pick go a year ago to lose Ben Gordon in a trade that freed up the cap space to grab Josh Smith. The trade was almost like a payday loan: the Bobcats gave the Pistons the opportunity for cap space in 2013 instead of 2014 in exchange for a protected first.

So unless the Pistons were really going to suck, there's no reason for Detroit to hold back.

In fact, it's better for Pistons general manager Joe Dumars if the pick Charlotte makes in place of Detroit isn't very good. Add in that the Pistons have been bad for a number of years, that the youth movement has borne some fruit and that there's a gaping hole in the middle rung of the East, and you have a recipe that begs for a decent team.

Josh Smith is quite good, a fringe All-Star candidate seemingly every year now. He helps a shallow Pistons frontcourt, even if he's required to play some small forward. (He's a superb rebounder at small forward and usually a spectacular defender. Usually.) And the key thing in this trade for Brandon Jennings -- in which Detroit agreed to pay him a really reasonable salary -- is that Jennings is currently loads better than Brandon Knight.

Taken together, Smith and Jennings soaking up all of your cap space in a big summer for the franchise doesn't look optimal. They're two inefficient scorers with scattered reports of clashes with coaches being added to a team filled with young, impressionable talent. But in the Pistons' circumstances, it works. Andre Drummond is going to be good. Greg Monroe is already there and getting better. Rodney Stuckey, despite a down year last season, has historically been solid.

And Maurice Cheeks might just be the right coach for this crew. Known more as a motivator than a tactician, Cheeks should be able to get Smith and Jennings going all-out from Day 1. Early success might spark the team into some confidence, and that can only take them higher.

The problem is, of course, all those bad shots Smith and Jennings are bound to take. Smith is horrid from the perimeter: 44 percent of his field goal attempts were jumpers from outside of 16 feet. He took 221 threes. He shoots below 30 percent on threes. Jennings takes a lot of threes, too, but converts them at a decent rate (36 percent). His problem is that he's never had a decent conversion rate at the rim, yet he often drives to the rim. Most guards shoot 55 percent or better at the rim. Smith, a bigger player but someone often driving in instead of posting up, shot 77 percent at the rim, for example. Jennings shot below 50 percent at the rim last season and an abysmal 28 percent on shots from 3-10 feet away. (Those runners, teardrops and floaters just ain't working.)

The Pistons as the new Grizzlies? 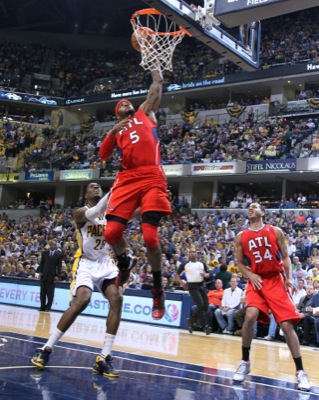 Tom Ziller on the similarities between the two clubs.

So, Pistons fans are going to be watching Smith fire up jumpers he shouldn't be taking and Jennings take quixotic journeys in the paint when he'd be better off lining up deep balls. Bless you, Andre Drummond. You might average 10 offensive rebounds per game.

Defense should be the calling card of the Pistons, and the offense should largely drive Detroit fans crazy. The best way for Cheeks to keep his charges reasonably sane in terms of shot selection is to challenge them to set up Monroe and Drummond as frequently as possible. In Milwaukee, Jennings had a backcourt mate in Monta Ellis who did a lot of playmaking. Stuckey can do a little of that, and we'll see about Kentavious Caldwell-Pope. But Smith's a fine playmaker who isn't nearly as turnover-prone as you'd think. Encouraging Smith to drive the lane with an eye on his bigs is a far better result for the team than encouraging Smith to fire up jumpers. Anything but jumpers for him. And Jennings is so bad at the rim that it'll be loads better if he looks for Drummond for a drop-off or lob consistently, or kicks it out to Monroe for a mid-range jumper. Monroe and Drummond need to be fed for this team to be good, and asking the two stars to do the feeding might keep them away from their worst habits.

There's no reason the Pistons can't be the No. 6 seed in the East now. The Hawks, Wizards, Cavaliers and Raptors all have opportunities to be that good, but have as many or more challenges than the Pistons. The question is whether Pistons fans will survive the regular season sane enough to enjoy the playoffs.