The Washington Wizards have signed point guard John Wall to a five-year deal.

The Washington Wizards signed point guard John Wall to a max contract extension for five years and approximately $80 million, reports Washington Post beat writer Michael Lee. The deal that begins in 2014-15 will keep Wall in Washington through the 2018-19 season.

Earlier this week, it was expected the team would announce the deal with an Aug. 1 press conference. 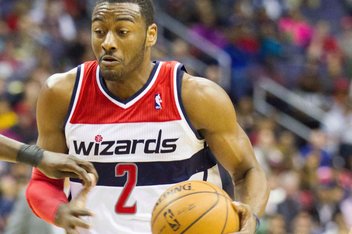 What we must talk about when discussing John Wall's max deal

Wall averaged 18.5 points, 7.6 assists and 4.0 rebounds per game in 2012-13 despite missing a large chunk of the season recovering from a knee surgery. He played in the final 49 games and turned one of the NBA's worst teams around to a large degree.

Still, the Wizards finished with a 29-53 record and questions arose about the decision by Washington to sign the 22-year-old to a max deal.

Wall spent the last week at the USA Basketball minicamp and joins Derrick Rose, Russell Westbrook, Chris Paul and Deron Williams as the only point guards in the NBA that have max contracts.