There's joy in Houston and there probably should be outright despair in Los Angeles, because the path beyond Dwight Howard is obscured by a deep, dark fog.

Share All sharing options for: Without Dwight Howard, the Lakers need miracles

The question of what the Los Angeles Lakers do now is by far the most fascinating story line coming out of the resolution of Dwight Howard's future.

We know the Houston Rockets will be excellent, no matter what the team gets back for Omer Asik, assuming he is indeed jettisoned. Defense was a struggle for Houston in 2012-13, and Howard is one of the league's finest defenders. Plus, he (currently) seems to be pleased with the coach and co-stars in place. It'll be great to see how good the Rockets can be, but to me, it's going to be more interesting to see how bad the Lakers will be.

But here's the thing about the Lakers and possibly being even worse than in 2012-13: they can't be too bad, because they have Kobe Bryant. 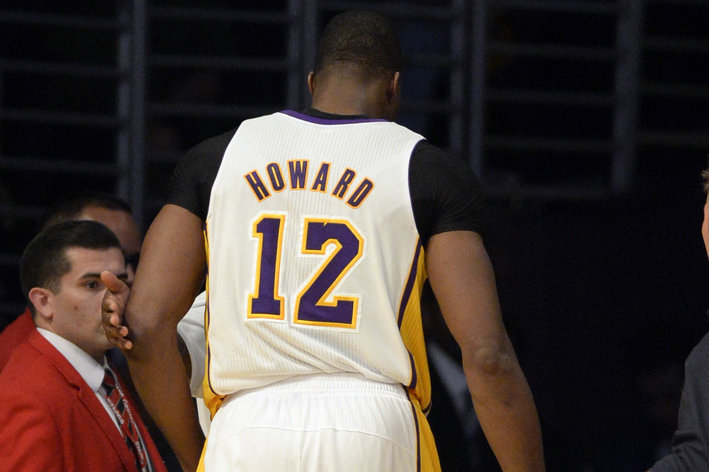 Silver Screen and Roll reacts to Dwight Howard's decision to join the Rockets.

Tanking for a lottery pick? Kobe expects to be back early in the season, if not for the season opener. (I wouldn't bet against the season opener.) Kobe Bryant is not going to be a part of any tanking/rebuilding exercise. Are the Lakers going to trade him to get younger and/or get immediately worse? That episode would make the Dwightmare look like a daydream.

Steve Nash and Pau Gasol are still in L.A., and frankly, that trio is better than five or six other Western Conference "Big Threes." (Shout out to Dragic-Bledsoe-Gortat, Cousins-McLemore-Vasquez and Hayward-Burke-Favors and/or Kanter.) The Lakers will win some games, maybe even just behind the rate at which Howard's Lakers won, if Nash and Gasol stay healthy. Remember, huge stretches of the 2012-13 Lakers relied on Howard, Bryant and basically no one else save for a random Earl Clark Game. And they made the playoffs. Subtract Howard, add Gasol and Nash back in, and you have a similar if likely somewhat worse squad.

That assumes health for older, heavily-used players, though. But if the Lakers are bad enough to get one lottery pick in an excellent draft, that'll be it. The Phoenix Suns have claim on the Lakers' 2015 first-round pick as a part of the Nash sign-and-trade. So rebuilding from scratch is perilous.

Lakers fans are quick to remind us that very little salary is on the books for 2014-15, making the free agency period one year from now a time for potential rebirth. The Lakers have only $9 million in long-term salary (that's Nash), meaning they'll be able to sign or trade for about $50 million in players. But Kobe looms. He's said he wants to keep playing. How 2013-14 goes could dictate whether he stays in 2014-15 and beyond. If so, how much of a salary hit will he take? He's making $30 million next year, and his 2014-15 cap hold will be about $31.5 million. Will he go as low as $20 million per year? That would be a 30-percent pay decrease ... but it would leave L.A. with $30 million in space and at least 10 roster spots to fill.

Lakers fans talk about landing LeBron James, who can opt out in 2014. Only LeBron has never given any indication whatsoever he wants to a) play with Kobe for a full NBA season, which is way different than a Team USA tournament, b) play for the Lakers, or c) jump on another rebuilding project. In fact, LeBron going to Miami was a complete renunciation of every argument made in favor of the James-to-L.A. posturing: He doesn't care about the aura of old franchises (ask the Knicks and Bulls), he doesn't want to play in L.A. (ask the Clippers), he's not interested in being a savior (ask the Nets) and he's never followed public expectations of what he should do (ask the Cavaliers). If LeBron chose to join the Lakers, that would be a miracle.

Outside of Miami's trio of stars, the only other big name not in his mid to late-30s who could be available in 2014 free agency is Carmelo Anthony, but he seems to like New York quite a lot. The odds of the Lakers recreating a contender with all of that cap space absent a LeBron miracle are, well, miraculous. It'll take some expert wheeling and dealing for GM Mitch Kupchak to grab another Howard-like star via trade, a marquee player to carry the Lakers beyond the Kobe era. The one big, glaring problem: the Lakers have almost no assets outside of Kobe. Pau is due $19 million this year, and is clearly on the downside of his career. Nash is one injury from retirement. The 2014 pick can't be traded until draft day. Kobe is basically the only usable asset right now. The cupboards are otherwise bare. Kupchak is a master worker in this game. But he can't conjure up stars. He needs something to use, and he doesn't have it now that Howard left for nothing.

Which leaves us with one final miracle: Andrew Bynum returns to Los Angeles, gets healthy and retakes his place as heir to Kobe. Getting Bynum will be extremely difficult -- it would almost assuredly require flipping Gasol to a third team in a sign-and-trade with Philadelphia -- and betting on Bynum's knee recovering fully is a dice roll. But it may be the best dice roll -- the best chance for a miracle -- the Lakers have at this point.