Dwight Howard is a Houston Rocket, and fans of various teams around the NBA had different reactions to that, as you might expect.

Oh, the drama. There was a lot of it in Los Angeles and Houston as Friday night turned into Saturday morning, and there's no better place to start than SB Nation's blogs for each team, Silver Screen and Roll for Lakers fans, and The Dream Shake for Rockets fans.

The reaction from Patrick Harrel at The Dream Shake was pretty subdued, but the comments section was anything but: 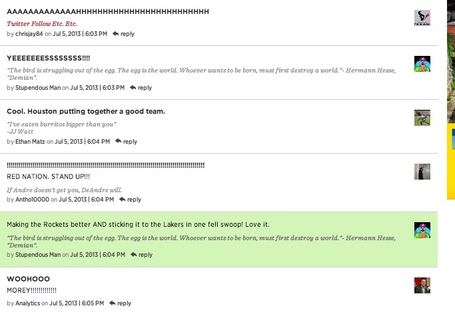 A bit earler, the mood was a bit different, as Howard was reportedly 50-50 between the two teams:

But things worked out:

At SS&R, the focus was on the future:

The Lakers must move on without Howard, who less than a full year ago was one of the biggest acquisitions in Lakers history. Kobe Bryant, Pau Gasol and Steve Nash remain as the trio that Mitch Kupchak will have to build around, and there's no telling what's next for Los Angeles.

The comments section was not particularly fond of Howard, as you might expect.

At least they weren't taken by surprise:

All but one of our writers on Silver Screen predicted Dwight Howard would join Houston.

But it was still disappointing:

As for other teams: The Warriors swung and missed on Dwight, but connected on Andre Iguodala, so the mood at Golden State of Mind wasn't too somber, as you can see from their list of 12 reasons to love the Iguodala acquisition:

The Dallas Mavericks were one of the first to learn they were bumped from the Dwight sweepstakes. But that wasn't much of a surprise, as Mavs Moneyball wrote:

The Mavericks dreamed big, and had they succeeded, it would have been fantastic... But it's deeply, deeply disingenuous for anyone to pretend that its ultimate failure had to do with the unforeseeable. It just didn't.

They ended up nabbing Jose Calderon.

The last team Dwight was considering, and to many the least likely option, were the Atlanta Hawks, his hometown squad. Peachtree Hoops seemed to be okay with the fact that Dwight had left them in the running for so long.

There should be no conspiracy theories like a phony moon landing type deal when it comes to this. Just because our man Arye Abraham didn't catch Danny Ferry crossing the street in Dad jeans on video like Rockets GM Daryl Morey doesn't mean they weren't out there with Dwight and Andre Iguodala.

Like the other teams, they responded with signings, grabbing Paul Millsap and less notably Demarre Carroll.