Don't burn your jersey! It just makes you look dumb for having bought it in the first place! Here are better things to do.

A lot of eager Lakers fans bought Dwight Howard jerseys last year. A lot of Lakers fans are now very eager to get rid of those jerseys.

Cup-of-coffee jerseys are hipster basketball memorabilia. Yo, you have a Rasheed Wallace Hawks jersey? How many of those did they even make?

But they made, like, 42 trillion Dwight Howard jerseys, and in his one year in Los Angeles, he got everybody really excited about the fact that he played for the Lakers, then got all those people pissed off. Now, those jerseys are worth 17 cents, tops.

As For The Win noted, there's some serious burning going on:

Dumber purchase: the D12 jersey? Or A HALF PURPLE HALF GOLD KOBE BRYANT JERSEY OMG THAT'S AN AFFRONT TO HUMANITY

People are also doctoring their jerseys:

Lakers fan have already decided what to do with their Dwight Howard jerseys. pic.twitter.com/B83i0y61vP

Guys, this isn't a good look. For starters, you're just drawing attention to the fact that you were silly enough to buy a Dwight Howard jersey in the first place. And second, there are much better ways to dispose of your items of clothing than low-grade arson and non-clever vandalism. We came up with five other things you can do with your Dwight Howard jersey.

Pretend it's a Shannon Brown jersey

Those people who changed "Howard" to "Coward" are on the right path. But then it looks like you bought a jersey of a player whose last name is "Coward," and according to basketball-reference, there's never been one of those in the NBA, so you just look stupid. 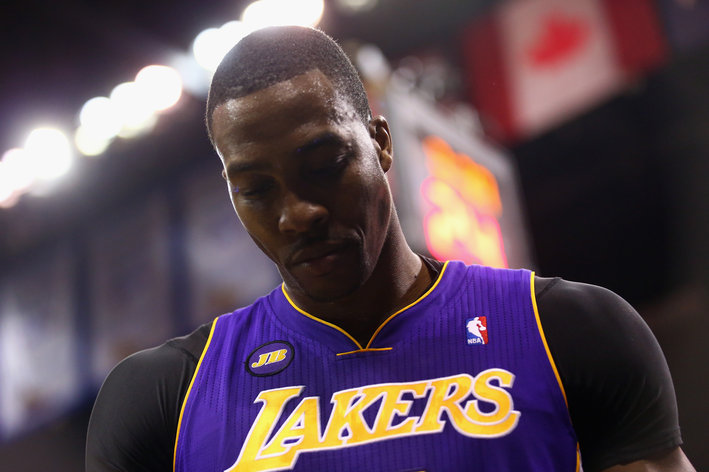 There have, however, been 18 Lakers players to wear the No. 12, including legends like Pat Riley, Don Chaney and Jannero Pargo. But most of those players came before the Lakers wore their current uniform, and most of them have names that aren't too much like "Howard." Dwight and Shannon share two letters in their last names, and you could probably doctor the "BR" into a bootleg "H" if you really wanted to.

Turn it into a sail

Give it to a friend named "Howard"

They'll be proud to have an item of clothing with their name on it. If any of you want to give me a Green Bay Packers Aaron Rodgers jersey and hack off the "S", I'd take it. By the way, if you don't have a friend named "Howard," just go on Facebook, search "Howard," and add everybody you see as a friend.

Repurpose the cloth for other Lakers-themed items

So, like, I'm not up on my Martha Stewart's home living, but I definitely feel like a pair of scissors and some innovation can do wonders here. You can cut snippets of jersey cloth and apply it with glue to some items you already own, giving them an extra bit of purple-and-gold flair. You can make yourself a koozie! Also, I bet a bunch of Lakers fans have those stupid dog jerseys.