Josh Smith heads to Detroit Pistons, where he's not a great fit

The Detroit Pistons needed to spend on somebody this summer, and in the end, they picked Josh Smith, a terrible fit for their roster.

Share All sharing options for: Josh Smith heads to Detroit Pistons, where he's not a great fit

The Detroit Pistons made the big splash they long promised, agreeing to a four-year, $56 million contract with Atlanta Hawks forward Josh Smith Saturday.

People will probably scoff at the final number on Smith's contract, but I think he's worth that price. At the very least, it's the kind of deal one could reasonably expect him to get in this market, given the combination of his elite skills and his inconsistency. Nobody was going to sign Smith for any less than this.

Unfortunately, this is the wrong team for him to thrive.

I'm struggling to see how Smith will fare well on a roster that is being built around young frontcourt talents Greg Monroe and Andre Drummond. Given Drummond's inability to space the floor, it's imperative to surround him with decent shooters. Monroe has improved his 17-foot jumper, but he's not a three-point threat, so theoretically, everyone else needs to be able to hit a perimeter shot. 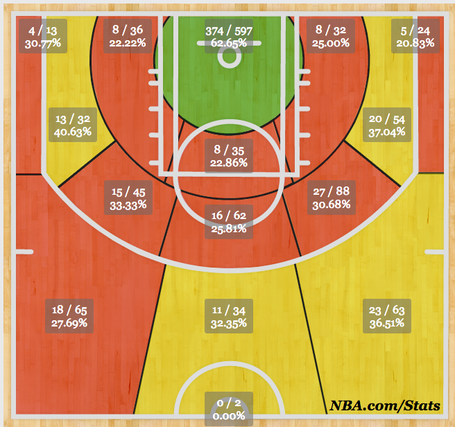 He's OK from the right wing, but that's about it. Otherwise, that's a lot of threes for someone who doesn't shoot him well. This is not a new thing, either -- Smith has averaged at least one three-point attempt per game every year except for 2009-10 and has never shot better than 33 percent from downtown in any year except for 2010-11. The last thing you want to do with Smith is put him in a position where he's going to be on the perimeter more often, and yet that's exactly what Joe Dumars has done. There are 48 minutes in a game, so Smith will likely get some time at power forward, but that would mean fewer minutes for Monroe and Drummond and would also require Maurice Cheeks to stagger the minutes of his three best players.

Smith did play some small forward last year, but there were unique circumstances. Atlanta had good shooting up front around Smith with Al Horford, Anthony Tolliver and even Johan Petro, who preferred to stand out on the perimeter. They also had sweet-shooting backcourt players and ran a Flex offense that inverted their wings and bigs by design, allowing Smith to post up smaller players with good spacing. Detroit doesn't have that dynamic because Drummond can't stand on the perimeter and the only good perimeter shooters in the backcourt are Brandon Knight and rookie Kentavious Caldwell-Pope. Perhaps the Pistons will figure it out over the duration of Smith's contract, but they'll really need to nail any future signings to make it happen.

Truth is, the Pistons sort of backed themselves into a corner here. They needed to surrender a first-round pick to dump Ben Gordon -- a previous Joe Dumars Free Agent Splurge acquisition -- in a trade with Charlotte. That pick is top-eight protected in 2014, and if it's not conveyed then, it becomes top-one protected in 2015 and completely unprotected thereafter. The Pistons have to be decent this year, because otherwise, they run the risk of surrendering a pick as high as No. 2 in the draft in 2015. If they make the playoffs next year, they end up only losing a mid-first rounder, which is far better than the scary alternative.

That's why they were so aggressive in free agency, and that's how they end up spending $56 million on a player that doesn't fit. One mistake in 2009 appears to have turned into another mistake in 2013.