The Cavaliers' ability to sign Jarrett Jack shows the rest of the league they are serious, but is Jack really the best on-court fit for a club that already has Kyrie Irving and Dion Waiters?

The Cleveland Cavaliers emerged as a surprising winner of the Jarrett Jack sweepstakes, swooping in to get the Golden State Warriors guard to agree on a four-year, $25 million contract that includes a team option after the third year.

The impact of this move probably will be felt most off the court in areas that are difficult to measure. Jack is a proud veteran, a team spokesman both publicly and behind closed doors and the kind of steady influence that would help mold young players. He surely helped Stephen Curry and Klay Thompson in more ways that we know, and the Cavaliers must think he can do the same thing to Kyrie Irving and Dion Waiters. Cleveland's also probably hoping that the Jack signing acts as a flashing light to future free agents. If someone like Jack would choose Cleveland over several other suitors, perhaps it's a sign that the Cavaliers can compete for even bigger fish in free agency. It's hard for me to speak to all of that, though. I'm sure it matters a lot, but it's not something I can accurately evaluate.

As an on-court fit, I have some questions about this move. Jack was a helpful caretaker for Golden State this season and should occupy a similar role with the Cavaliers, but I think his impact on the Warriors might have been overstated. 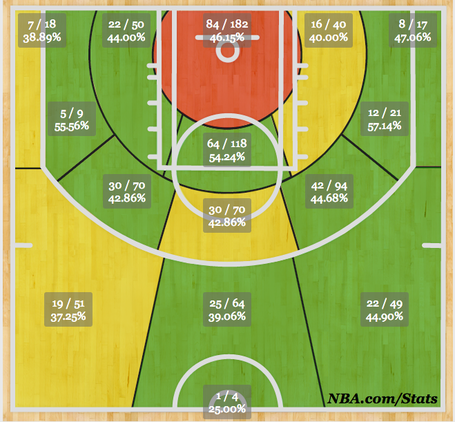 The proficiency from the "dead zone" from 16-23 feet is definitely worth noting, as is the shooting on above-the-break threes. Lest you think this is a one-year fluke, here is his shot chart from 2011-12, when he played for New Orleans. 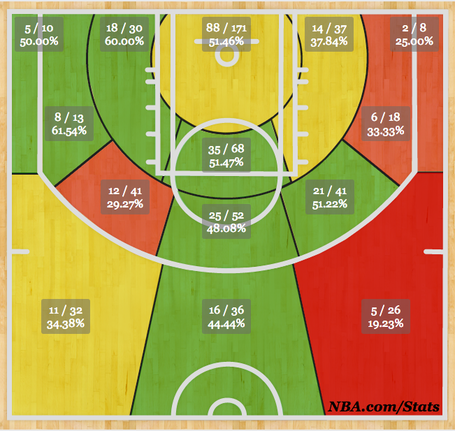 This makes him a good security blanket for any offense. You don't want to shoot a lot of 16-23-footers offensively, of course, but even the teams with the best shot distribution have a handful of possessions where they're forced to attempt shots like this. Having an elite shooter to take those in Jack helps tremendously. Jack also can create shots like this anytime he wants, which is a huge key for a team that got little bench production last year, even after the January trade for Marreese Speights and Wayne Ellington. The chemistry Jack developed with Carl Landry last year running pick and pop also probably played into Cleveland's decision here. One could imagine Jack being just as good in those plays with rookie Anthony Bennett as he was with Landry.

The problem is that Jack is deficient in areas other than scoring. He can hit his big man on pick and pops, as noted, but he doesn't have great peripheral vision to spot the other reads on the floor. He piles up assists, but is less skilled at making the pass that leads to the pass. He can also get tunnel vision and settle for those 16-23 footers early in the shot clock when running real offense to get a better look is preferred. In a lot of ways, he's a steadier version of the Knicks' J.R. Smith -- a proficient difficult-shot maker that runs hot and cold and gives back some of his plusses with so-so decision-making.

And then there's Jack's defense, which is bad and could look even worse playing with Irving and Waiters, two disinterested defenders themselves. He's not particularly quick on the ball and is prone to lapses off the ball that lead to open shots. The Warriors were 1.1 points worse defensively per 100 possessions with him on the floor during the regular season and 5.8 points worse in the playoffs, per NBA.com. Two years ago, the then-Hornets were 3.5 points worse defensively with him in the game. That the Cavaliers went after Jack given his issues on that side of the ball is especially curious given the role Irving and Waiters have played in causing Cleveland to be one of the league's worst defensive teams over the past two years. The Cavaliers are probably hoping new coach Mike Brown can patch some of those issues up, but he has his work seriously cut out for him trying to get all three of those guys to defend at a high level.

I'm also not in love with the price or the long-term money being guaranteed to a point guard that's turning 30 in October, While it should be noted that Cleveland has so much future cap flexibility that it shouldn't matter too much, the idea of Jack making close to $7 million at age 32 makes me nervous.

As I mentioned earlier, it's hard to speak to the intangible benefits Jack provides. That said, if it were up to me and I was making a decision based purely on the on-court merits, I would have preferred the Cavaliers sign Devin Harris instead, because he would have likely come cheaper and addressed Cleveland's defensive deficiencies much more effectively.