In Houston, Daryl Morey kept the Rockets competitive while stockpiling assets. In Philadelphia, Sam Hinkie has dug everything up. Why?

Share All sharing options for: Daryl Morey, Sam Hinkie and the proper way to stockpile assets

As more teams get really bad this offseason, there's been a ton of talk about rebuilding and tanking and their impact on the league. Most of the talk about been about whether it is healthy for the league to have so many teams rebuilding all at once on the eve of a fantastic NBA draft. (I wrote last week that I don't believe rebuilding is equivalent to tanking, so I won't be using that word.) I'm less concerned with that, given that the NBA surely knows whether it's healthy or not and has recently bolstered the mechanisms by which rebuilding in this way works for a team long-term. (That'd be by strengthening teams' opportunities to keep their own free agents.)

I'm more concerned with whether this type of rebuilding -- scorched Earth, Presti Plan style -- is something that works. It worked for Oklahoma City. It's very much not working for the Bobcats. And now, Daryl Morey has completed his masterwork with the Rockets, showing another valid path for non-glamour markets. (Houston's a huge market, but has not traditionally been as competitive for top free agents as L.A. and New York.)

As Mike Prada detailed on Saturday, Morey stockpiled usable assets while maintaining a decent team. Morey never had a single high lottery pick, let alone multiple high lottery picks. Once Yao Ming fluttered out of our daily lives and Tracy McGrady exited superstar status for good, Morey could have burnt everything to the ground, ensured a few high draft picks through losing seasons, and an eventual roster of young studs. Nope. He kept on plugging with rosters built for Rick Adelman and Kevin McHale while grabbing tons of mid-first picks and young players. And as Prada describes, he flipped lots of those for James Harden, which then allowed him to make a strong pitch to Dwight Howard. Fin. He has a title contender with an entirely new core despite going .500 or better every season since taking over. 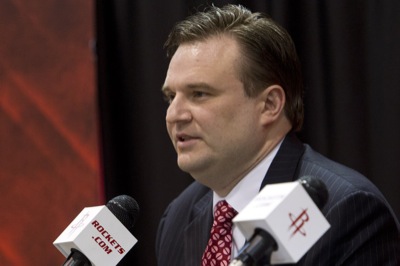 The Dream Shake explains why Morey has shut up his critics.

Philadelphia GM Sam Hinkie, who served as Morey's No. 2 in Houston, is going about it completely differently, and I wonder why. Having seen his old boss have incredible success turning a mid-rung team with some talented pieces into a contender, why is Hinkie instead trading Jrue Holiday for Nerlens Noel and a pick? Why is Hinkie openly going into 2013-14 without a glance toward the win ledger? I mean, he told the Philadelphia Inquirer, "Yeah, we weren't knocking on any doors on midnight on the first [of July.] That's for sure." He's not trying to mask this. He does not want the Sixers to be competitive in 2013-14. He probably would accept being non-competitive in 2014-15. He's clearly looking to follow the Presti Plan and rebuild with lots of high picks over a few years.

Again, the question to me is less about what impact this strategy has on the league versus why Hinkie is making this choice and why Morey went the other way. What does Hinkie see? Is it all about the 2014 draft, where the Sixers now project to have two picks in the top 16? Was Hinkie just not sold on Jrue Holiday, seeing Michael Carter-Williams as an upgrade over the long-term? We saw the Presti Plan go into vogue once the Thunder shot up the standings. Is the Morey Plan going to be the next stylish rebuilding model? Is it too difficult to pull off? It'll be interesting to see how it shakes out.