The deep, deep Western Conference is undergoing some rapid change. Who will survive? Who will rise up?

Share All sharing options for: NBA Free Agency: The Western Conference in upheaval

Some caveats: there's still a whole lot of NBA free agency left, Andrew Bynum is unspoken for, trades will surely materialize as teams figure out how exactly to fit their deals under the cap on Wednesday and any number of expensive players remain up for grabs. But at this point, it looks as if two Western Conference playoff teams are in danger of sliding out, with numerous contenders ready to take their spot.

The L.A. Lakers are first and foremost. After losing Dwight Howard in free agency, and with Kobe Bryant potentially missing time while recovering from a torn Achilles, the West's No. 7 seed from last season will again be in danger of missing the postseason. The first two names tied to the new frontcourt opening were Lamar Odom and Chris Kaman. So, yeah. It could be a rough transition year for Los Angeles. Or, Kobe could be back for Game 1 (as I expect) and the Lakers could fight for a high seed with a rejuvenated Pau Gasol and a healthy Steve Nash. Who knows?

The Utah Jazz didn't make the playoffs in 2012-13, missing out on the final day of the season. They will not likely be in any position to contend for a playoff spot in 2013-14. Al Jefferson and Paul Millsap fled for the Southeast, and Utah used its cap space to absorb Richard Jefferson and Andris Biedrins in some sort of weird "thank you" to the Warriors. (What a mystifying deal.) Utah has its potential point guard of the future in Trey Burke and some young players throughout the roster, but this squad missed the postseason with Millsap and Jefferson. Making it without them seems highly unlikely, and if Enes Kanter, Derrick Favors, Alec Burks and/or Burke struggle, this could be one of the worst teams in the conference. (I still have the Suns in my pool.) 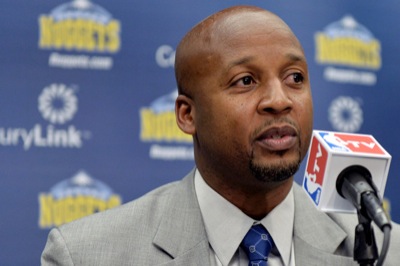 Denver Stiffs on the Nuggets' step back this offseason.

The Denver Nuggets are, like the Lakers, a team with a huge range of possibilities. They lost Andre Iguodala, potentially replacing him with Randy Foye. They swapped out Kosta Koufos for Darrell Arthur. George Karl is gone, replaced by Brian Shaw. They won't have Danilo Gallinari back until around midseason. They signed J.J. Hickson, which has everyone concerned they'll trade Kenneth Faried. (Or JaVale McGee!) This is a weird team that landed the No. 3 seed a year ago and bowed out in Round 1. Suffice it to say that losing Iguodala likely means that the No. 3 seed (a tough pull last year) is a longshot. But will the loss knock the Nuggets all the way down out of the playoff picture? Is Ty Lawson good enough to carry the club offensively for the first half of the season? This could be the second spot in the bracket opened up.

The Clippers and Grizzlies have gotten better. The Spurs haven't lost anyone of note. (Gary Neal is still out there, but he's not so much "of note" as a player they'd like to keep.) The Rockets have shot up the standings already after picking up Dwight Howard. The Thunder will get Russell Westbrook back. The Warriors are better. Those teams are likely your top six, barring any further blockbusters. That leaves two spots for the likes of the Lakers, Nuggets and a couple other non-playoff teams from 2012-13 looking to bounce back.

There are the Mavericks, who have a deep point guard corps, Dirk Nowitzki and some cap space to go after Andrew Bynum. I'd call them a fringe team until we see who they line up at center. If it's Bynum, I think they are in. If it's Ronny Turiaf, I will remain skeptical.

There are the Blazers, who remained in contention until very late last season and added C.J. McCollum, Robin Lopez and Dorell Wright while losing Eric Maynor and J.J. Hickson.

The Timberwolves still have a really solid battery and an excellent coach. Can Kevin Love and Ricky Rubio stay healthy? How much will a healthy Chase Budinger and the addition of Kevin Martin help? Can they keep Nikola Pekovic? Whither Andrei Kirilenko?

The Pelicans are clearly making a play for the postseason. Is the Jrue Holiday-Eric Gordon-Tyreke Evans backcourt good enough to carry them through Anthony Davis' youth?

Basically, the only three teams in the West very unlikely to contend for the playoffs at this point are the Suns, Kings and Jazz. And of those, the Jazz could surprise us with all that solid youth and the Kings are moving like a team that wants to be at least in the No. 8 seed conversation. (See: Landry, Carl and potentially Ellis, Monta.) The Suns? No, not happening. And that's sort of amazing, isn't it?

For all the fretting about a league "tanking" for Andrew Wiggins and Jabari Parker, only one team in the West ... is clearly not interested in winning any games in 2013-14.

For all the fretting about a league "tanking" for Andrew Wiggins and Jabari Parker, only one team in the West, Phoenix, is clearly not interested in winning any games in 2013-14. The Jazz could potentially be lumped into that -- we'll see. (I have a strange feeling that Kanter or Favors might break out, and that Burke can be a top rookie. Burke, one of the bigs and Gordon Hayward? Not bad. Not great, but not 20-win bad.) It's another year, lots of shuffling up and down the conference ... and the West is still incredibly tough, incredibly deep, incredibly competitive. Will it ever end?